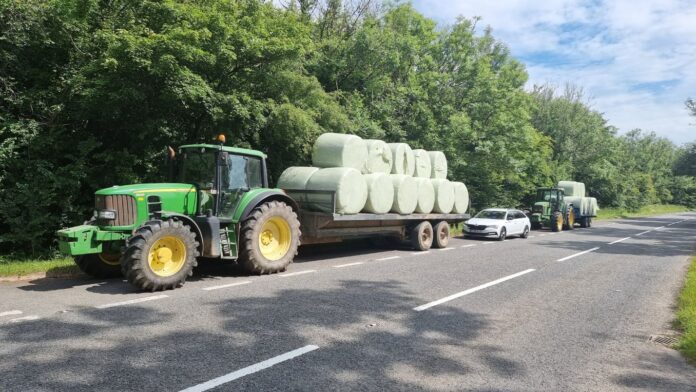 Police across the waters in the UK brought two tractor drivers towing bales to a halt in recent days.

According to a spokesperson for Devon and Cornwall Roads Policing Team, neither of the operators had secured their load of bales.

In a statement, a spokesperson for Devon and Cornwall Police said:

“A pair of tractors this time, neither having any load security, so nothing to prevent these 1-tonne bales coming off the trailer.”

“All loads, of whatever type, must be adequately secured. Drivers reported,” the spokesperson added.

One said: “To be honest, farming is tough enough. A verbal warning and let them strap them down?”

Another said: “Guarantee, he wouldn’t have been travelling 600 meters between fields. Most of this lot are contractors, travelling all over the south-west.”

Another user posted: “They have really exaggerated the weight. They realistically weigh a max of 750kgs. So, say, it was a 13t load, those trailers will be suitable for 14-16t.”

Meanwhile, another said: “Lazy. Strapping down can be done easily and quick with a couple of guys.”

A user said: “1-tonne bales? I would be concerned with what he was hiding in the middle at the sort of weight. 600kgs max. I cannot argue with the lack of straps, though.”

Another argued that “these bales do not weigh 1 tonne, more like 300kgs and have you tried to push one off a trailer?”

“It is impossible. The load would not move. You are not experienced in this subject,” he added.

Meanwhile, a woman (60s) has been hospitalised following a car-tractor RTC in the west of Ireland.

The two-vehicle crash occurred outside Ballinasloe on Wednesday afternoon shortly after 3:30 pm.

“A female in her 60s was taken to Portiuncula University Hospital to be treated for her injuries,” the spokesperson added.