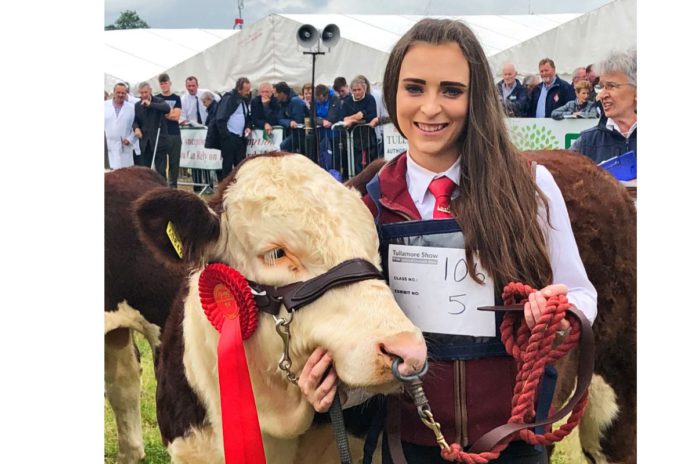 ‘I purchased my first ever suck calf with my Communion money’

“I believe that growing up on a farm has made me the person I am today,” – those were the words of Sinead Conry when she sat down for an interview with That’s Farming’s editor, Catherina Cunnane.

The 22-year-old, who hails from Ballinagare, Co. Roscommon, admits that this has been invaluable in showing her the value of working hard to achieve goals.

Sinead once relished the idea of becoming a teacher or a veterinary practitioner, but her career aspirations changed, as her Leaving Certificate edged closer.

“From a young age, I have always had an interest in farming. I purchased my first ever suck calf with my Communion money and kept her as a breeding cow.”

She has always been passionate about Hereford cattle, but knew that a considerable amount of time and money would be needed to establish her own pedigree herd.

“I started at the bottom with Hereford-cross suck calves and worked on getting my profit margin up every year, so that I would be able to buy a pedigree heifer.”

“As I was saving for the heifer, my parents surprised me and bought me one for my 18th birthday.”

“From then on, I started to grow my herd and cannot thank my parents enough for giving me such a good start.”

The following summer, the Roscommon native spent two months footing turf and saved “every euro” she made. She purchased a second springing heifer with her earnings. “I started saving everything I earned and the profit I made to go into my Hereford fund.”

When Sinead was nineteen, she took a leap of faith and rented a 40-acre farm on a five-year lease. “My parents supported me in every way possible when I made this life-changing decision.”

Her pedigree Hereford herd, which is registered under the ‘Rathnollag’ prefix, is farmed alongside pedigree Angus cattle. All breeding females are AI’d to renowned sires, some of which originate from the UK.

She sells all her pedigree bulls at society premier sales in October or March, while all females are retained as replacements; she recently purchased an in-calf heifer from the UK.

Sinead also assists her father with the running of the family’s suckler and sheep enterprise. All progeny are slaughtered under 20-months, while additional bulls and heifers are also purchased.

“I am fully responsible for all my livestock and the caretaking of my rented land – I carry out all the work that comes with it.”

Sinead is passionate about promoting the Hereford breed and is the current secretary of the Connacht branch of the Hereford Breed Society.

She is exhibiting cattle at agricultural shows for over three years now – a journey which has taken her to all corners of the island and across the waters.

“I love going to shows with Padraig and Catherine McGrath of Kye Herefords and having the opportunity to walk their high-end prize-winning cattle.

“I am very thankful to them for all their help and advice. I am at my happiest when I am in the show ring.”

“Showing is very rewarding when you put so much work into getting an animal ready and they receive a rosette.” explained the 2019 Angus All-Ireland Senior Young Handler.

“I have all HACCP certs and teaching accreditation. When I graduate, I plan to combine a career in environmental inspections with farming.”

“Going to college in Dublin is a struggle for me, as I hate being away from the farm and my cattle.”

Women in Ag and Macra

Sinead highlighted that more women are becoming involved in agriculture at farm and industry-level in recent years. “The stigma still exists that farming is for boys, but I don’t take any heed of that.”

She encourages any young female, who is interested in farming, to pursue their dreams and turn them into a reality, just like she did. “I am just as capable of doing all the jobs on the farm, as any man.”

The 22-year-old has been recently recognised for her achievements when she was crowned the 2019 Queen of the Land and FBD best-emerging farmer. “I was starstruck when my name was called out.”

She joined the rural youth organisation over one year ago and was involved in the re-establishment of the Elphin club. “Macra has given me the confidence that I was lacking.”

Going forward, Sinead would like to turn her attention to promoting rural Ireland, especially young farmers and encouraging farmers to look after themselves.

“I have one year left in college – I then plan to move home, have a ‘day-job’ and keep my farm running.”

In March, she will travel to New Zealand alongside three other Hereford breeders, to represent Ireland in the World Hereford Conference.

“2019, has by far, been the biggest highlight of my farming experience from picking up rosettes at agricultural shows to my two Macra awards.”

“And being picked to travel to New Zealand to represent Ireland, is the icing on the cake.” she concluded.

If you are a woman in agriculture and you want to share your story, email – [email protected] – with a short bio.