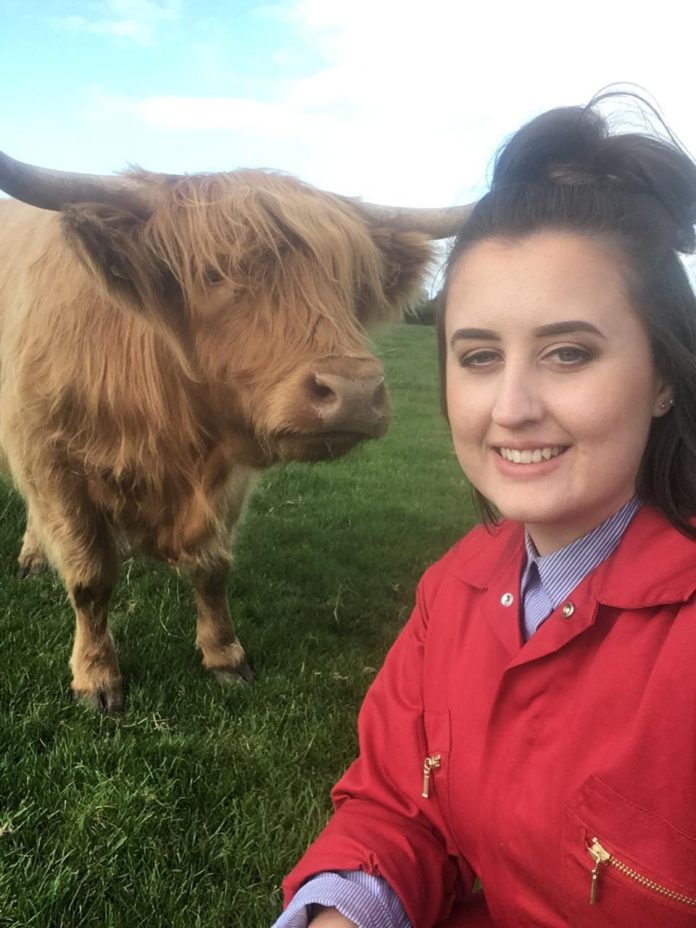 ‘I have always dreamed of owning Scottish Highlands’

That’s Farming editor, Catherina Cunnane, in conversation with Rachel Rankin in this week’s Women in Ag segment. She discusses her farming roots and Highland fold.

“I am privileged to live in the Lagan Valley agricultural heartland of East Donegal.

Farming is a family tradition; my dad is a second-generation farmer on our suckler and sheep farm.

The Rankins come from a long line of farmers; the herd consists of Simmental cows running with a Charolais bull and a flock of cross-bred ewes.

As one of six daughters, we have all grown up pulling our weight. There is no job too big or too small. I would take wellies over heels any day.

I work full-time off-farm; however, my fold is fully my responsibility. I spend all of my spare time spoiling and looking after them. 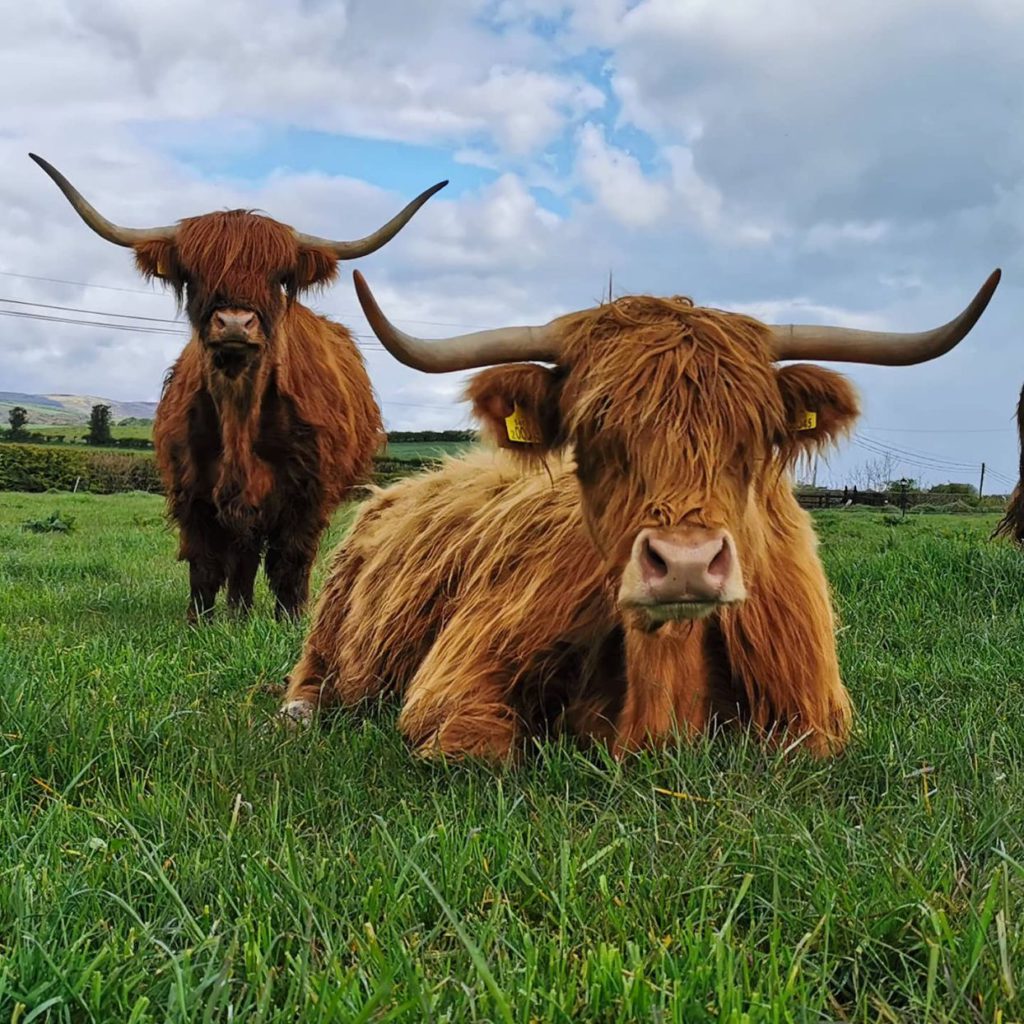 During lockdown, I spent a lot of time on my boyfriend Philip’s farm, helping out; it is where my fold resides.

Philip is a third-generation dairy farmer in partnership with his brother and parents, milking almost 200 cows, growing oats, and doing their own tractor and machinery work.

Growing up on a suckler farm, dairy farming was new to me, so it was educational and busy. I am now a pro silage raker, bale carter, and of course, I can change a few clusters.

I have always dreamed of owning Scottish Highlands. Honestly, I do not know why I have just always admired them.

They are such a hardy breed with their long fluffy coats and big longhorns with darkened tips, features that make them most memorable.

They have stood the test of time, with a life span of twenty years and average offspring up to twelve.

However, we must always be mindful; their long horns can be dangerous. They are great mothers and very protective. 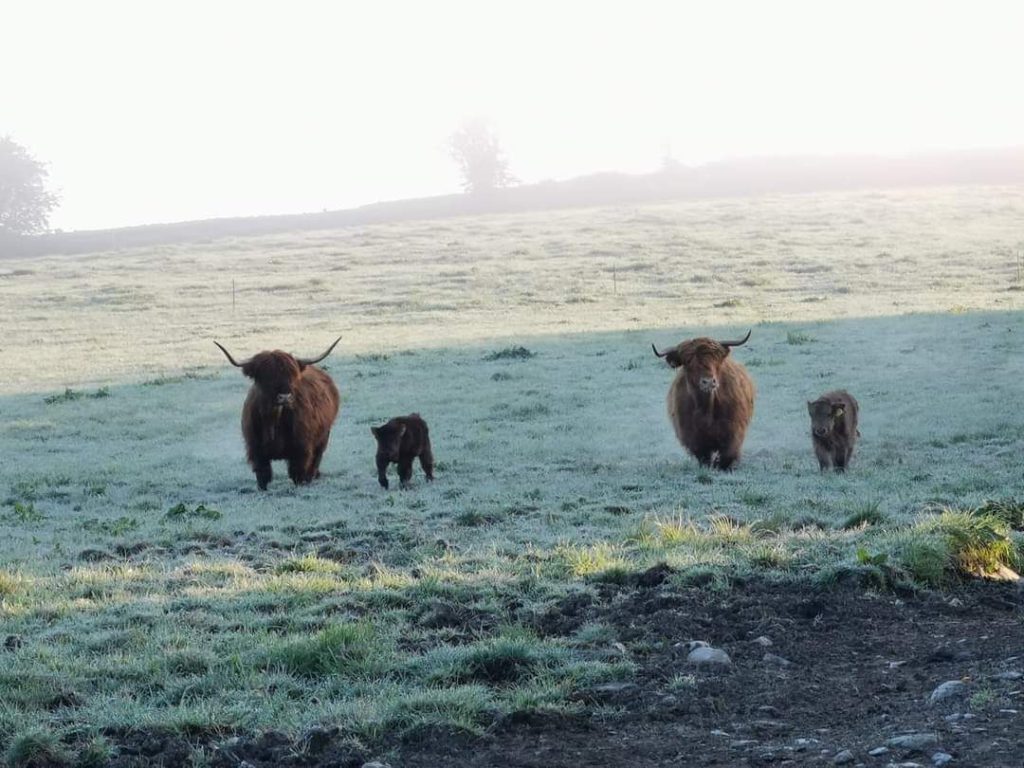 To my complete surprise, for my birthday in 2019, Philip bought me my first Highland through a local cattle haulier, Robert Mc Creery and his contact, A.J Ewing.

Tara Gael 3rd, affectionately known as Hilda, arrived off the boat from Inverness as a 2-year-old heifer with another surprise she was in calf.

You can imagine my delight impatiently waiting for the arrival of the first-born Highland, Hamish of Foyle View. This is where Whitehill Highlands’ Instagram account was established.

Hamish is my trouble maker in his spare time. He loves to create new holes in hedges, and there is not a fence too high to jump. Boy, he loves a dairy girl; it will be interesting to see what a Friesian-cross-Highland will look like. Will it be red, white and fluffy?

Last year, in December 2020, I decided to expand my fold. I imported two in-calf Highland cows from the isle of Mull using the same contacts, whom I would highly recommend. They dealt with all the paperwork efficiently and effectively, making the process run smoothly. 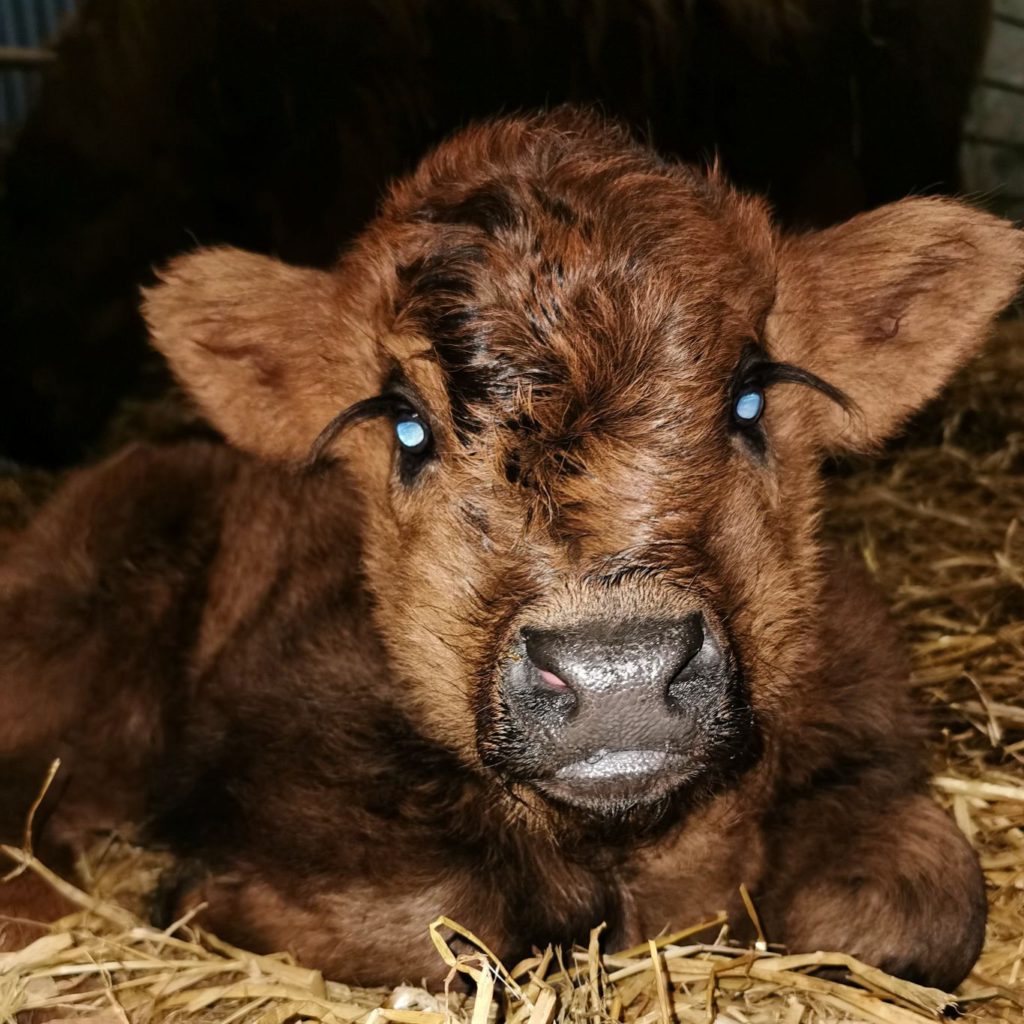 It just so happens their names were Laochag and Fraoch, which is Gaelic and translates into English as Little Heroine and Heather.

Heather had a bull calf called Herbie, and little Heroine had the first heifer of Foyle View called Hetty. They joined Hilda and Hamish in the spring.

Since then, Hilda has had another calf named Henry. He is the progeny from an AI service, Angus Mor.  Just like people, each and every Highland has a different personality and traits. As you can see, they are like the Kardashians of Highlands!

I became a member of the Highland Cattle Society this year, as all my Highlands are pedigree.

While it was not my first choice, I called my fold Foyle View Highlands. The majestic views of the river Foyle and Sperrin Mountains are in keeping with the beauty of the Highlands. 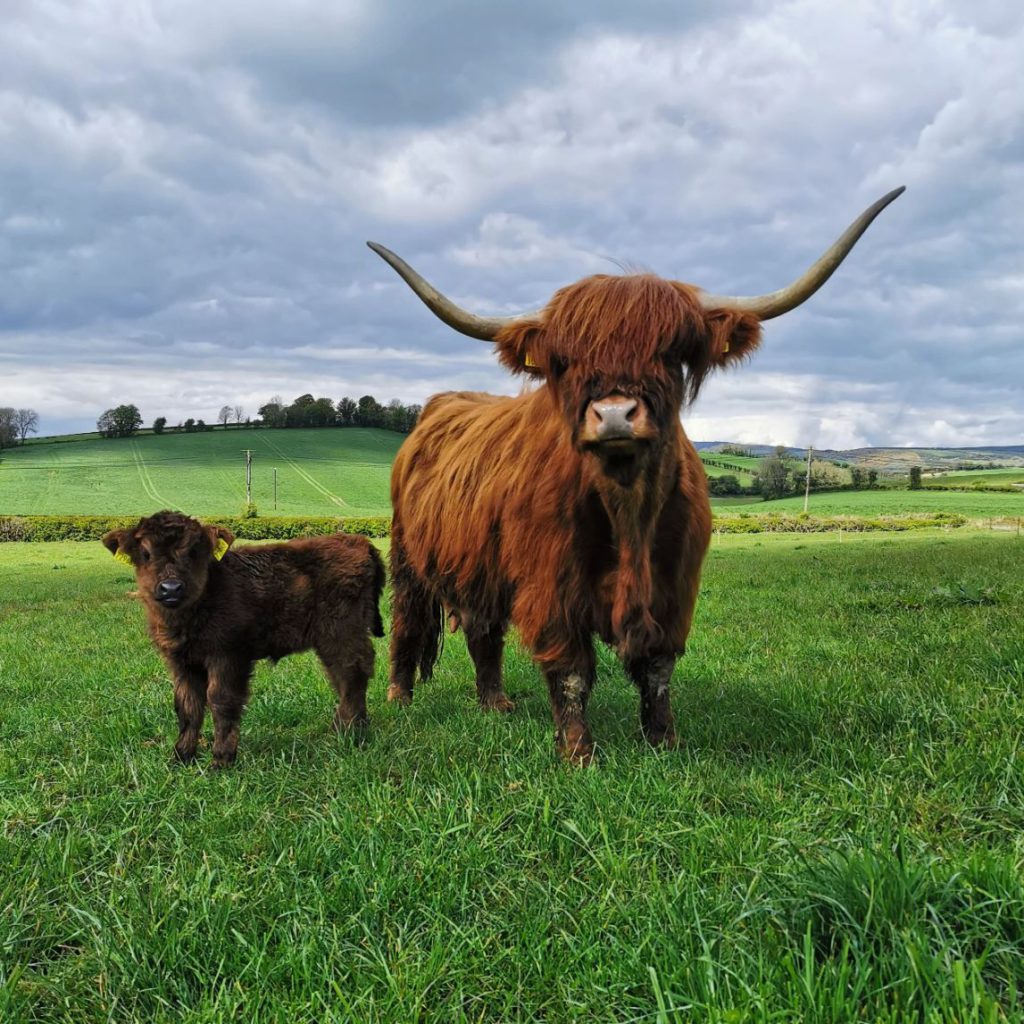 The Highland Cattle Society has an excellent genetic database, which can trace back to the 1900s and is fascinating.

I can trace Hamish’s bloodline back to Germany from the Sunderberg fold, who have told me he looks very much like his grandsire, Donnachadh.

Highland cows vary in price range depending on bloodline, and prices have continued to rise with increasing popularity.

I have been to Scotland a few times, mostly Edinburgh. The Oban Highland cattle sale is on the bucket list, along with a visit to Highland fold ice cream parlour.

Farming is such a rewarding job.  Every day is different, watching new life flourish and everything growing around me.

It is great to get out in the fresh air. There is no better feeling than watching the Highlands from spring-calving to growing and thriving throughout the year. 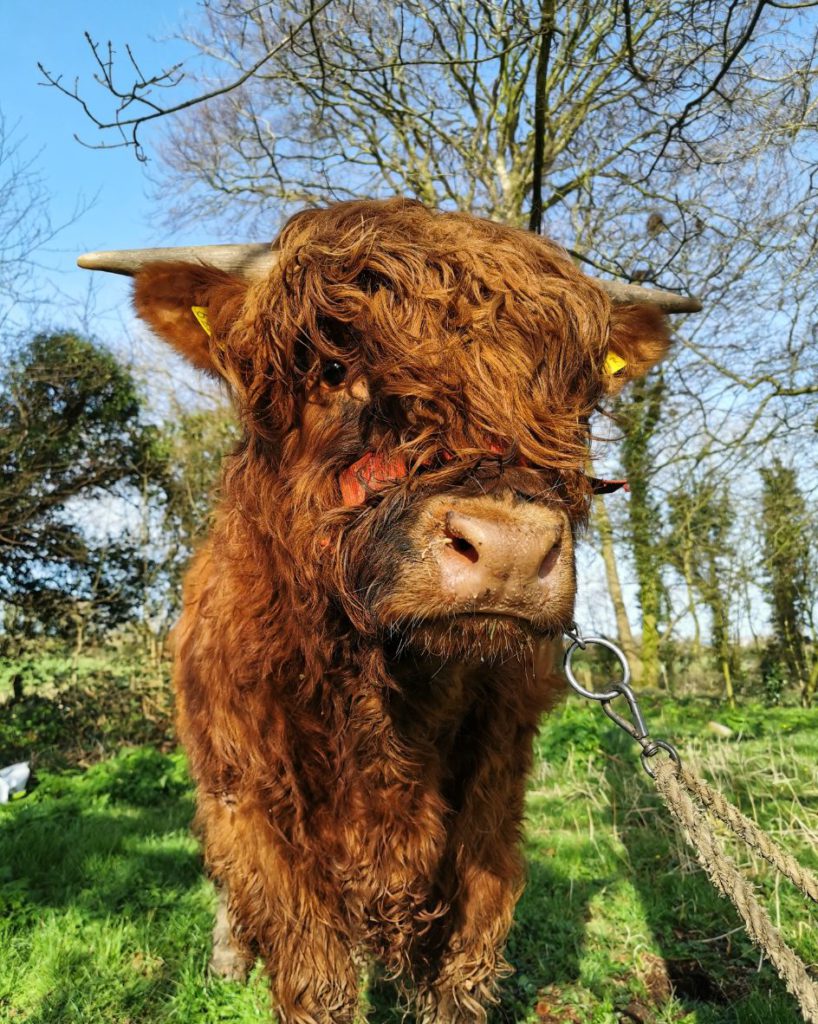 The biggest challenge I found was getting AI straws for Hilda as the gene pool is so small in Ireland, with a lot of people using Angus Mor of Glengoyne.

I am currently getting Hamish pedigree registered; bulls do not be “pedigreed” until they are 14 months. I hope to keep him as a breeding bull as he has an excellent breed type true to the breed characteristics.

This summer posed a new challenge for Donegal as we do not often see temperatures of 30 degrees. As Highlands are bred for cooler conditions, it was very important they had access to plenty of shade.

While I only have a fold of seven, I hope, in the future, to breed up expanding in numbers.

If the opportunity arises, I would like to buy a heifer from the renowned Balmoral Fold to keep improving the genetics of my fold.

With such an old breed going strong, the future ahead is bright and healthy for Highland cattle.” 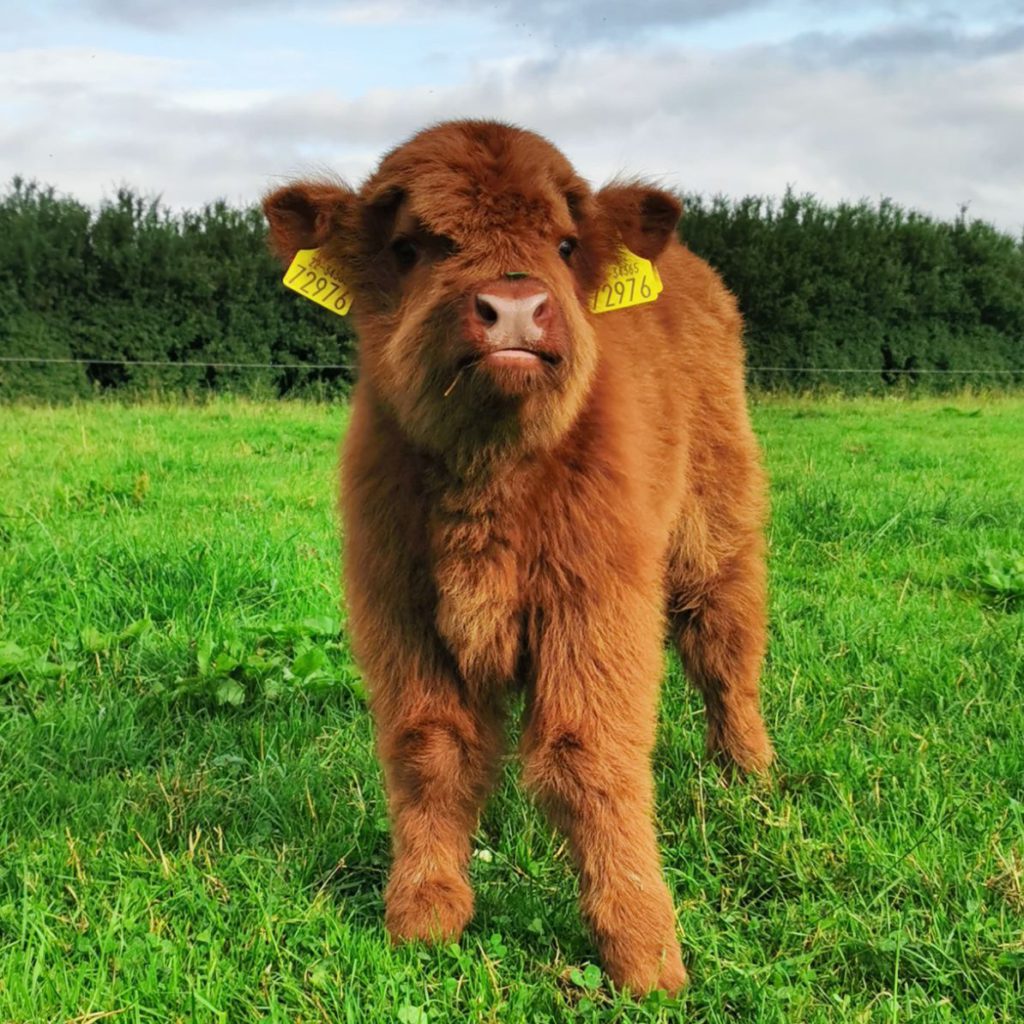 Do you have a Highland fold? To share your story, email – [email protected]