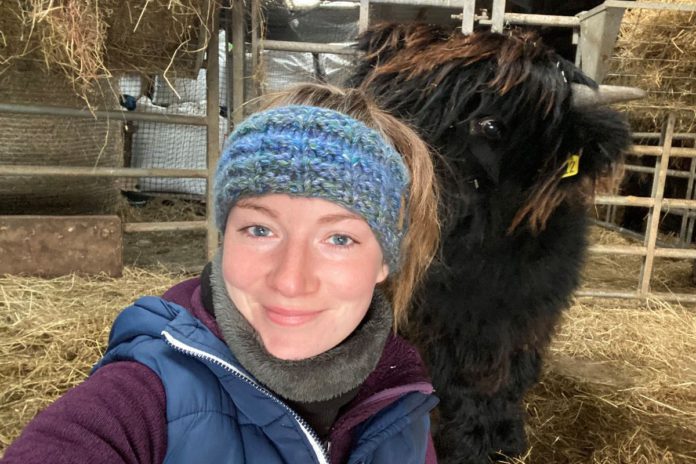 In this week’s Women in Ag segment, That’s Farming, profiles 27-year-old full-time ‘stockwoman’ Carianne MacDonald, a pedigree Highland cattle breeder and sheep farmer. We discuss calving heifers at 39-months, a free pass for cows, calving on an 800-acre tidal island and “believing in a butcher’s knife over a foot trimmer”.

27-year-old Carianne MacDonald often joked about becoming a farmer but never put much thought into becoming one.

She grew up near the seaside village of Gairloch in North West Scotland, hailing from a family where small-scale crofting was once a strong tradition.

The last crofters in her family were her grandparents, and the tradition goes back several generations on her grandmother’s side.

“I was pushed around and slept in a wheelbarrow when I was very young. Who needs a pram? Also, I nursed sick lambs back to health in granny’s kitchen; instead of a heat box/lamp. We warmed them in the very bottom oven of the rayburn; door open, of course,” she recalled.

MacDonald left school at the age of 18 in 2012 to study neuroscience at the University of Aberdeen. That lasted all 1.5 years before she left. “The academic route just was not for me, and I was homesick for my rural home,” she told That’s Farming.

“It had not crossed my mind that I could come back to farming once my grandparents retired; I would have been about 10 or 11 when they stopped.” 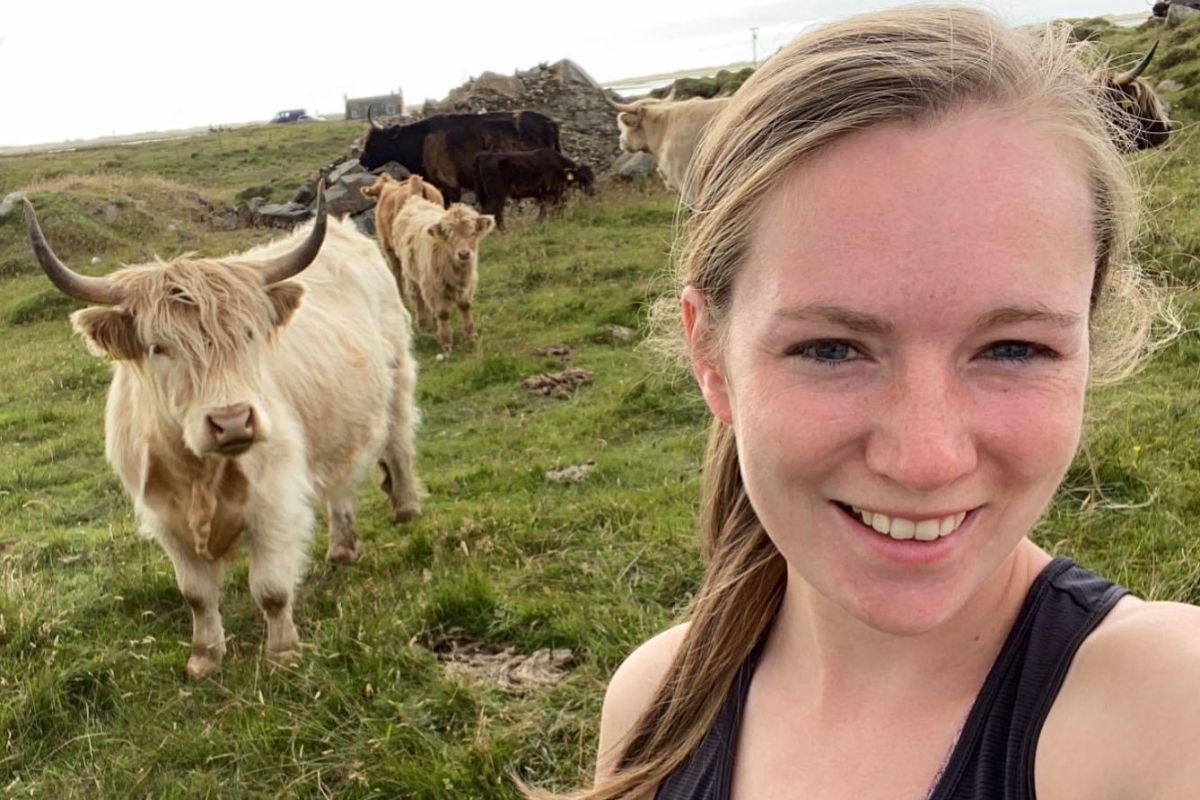 Then an amble opportunity arose when she met her now-husband, Fraser, a farmer who she resides with on the Isle of North Uist in the Outer Hebrides.

Her father-in-law and mother-in-law, Angus & Michelle MacDonald, husband and his siblings, Alexander, and Sarah, assist with the running of Ardbhan Croft.

Carianne holds the title of ‘stockwoman’ on the 3,500-acre organic farm, managing approximately 300 cattle. Currently, they have 250 pedigree Highland cattle – 155 of which are suckler cows.

Efficiency is the buzzword as she is the only full-time worker on the farm; Angus and Fraser have other family-run enterprises, and, therefore, cattle must produce on a very low input. She became a full-time employee in 2017, after working on a part-time basis since she moved here in 2014.

“I get up to all sorts, and no day is ever the same; this is a busy time of year as calving and lambing are in full swing together.”

“I am spending time with Highland cows in one of the most beautiful places in the world; I always say I am living the dream.” 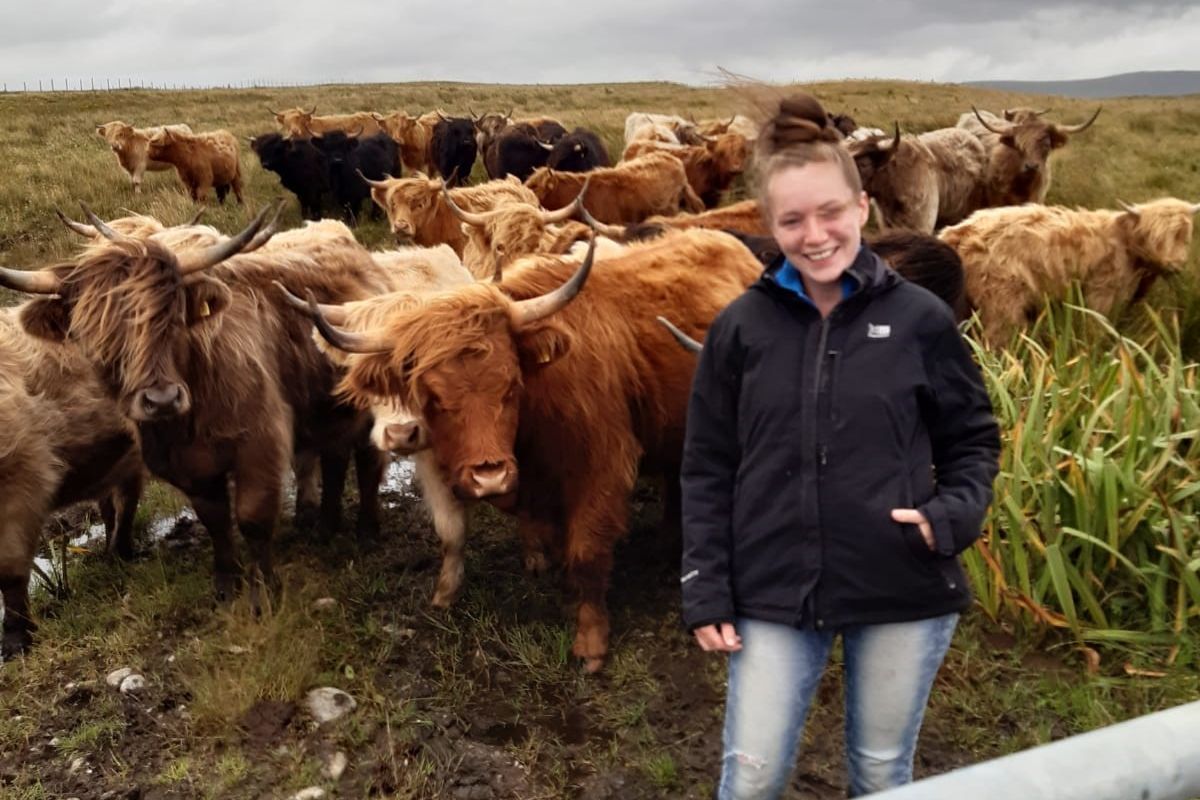 Calving on a tidal island

Their cows calve in a large machair pasture on the 800-acre tidal island of Vallay. Although, they are very low maintenance, the stockwoman drives over at low tide daily to “search for new calves”.

“I tag all calves as and when I find them. There are lots of holes amongst the huge sand dunes to look in. Then, I pop castrating rings on any cross males to save us a job later.”

“It is far less stressful for everyone involved when they are done at that age. Farm maintenance, feeding, stock checks, harvesting and many other jobs take up the rest of my year.”

There are slowly increasing the herd size every year as they have “a lot of land that could be managed better”.

Angus has taken the herd from six unregistered cows in the 80s to what it is today. They still have room to expand further, but their expansion rate largely depends on their heifer sales annually.

“We have Highland cattle because they are best suited to our ground; we have a lot of rough, heather moorland, and they graze where other cattle could not.”

“Also, we cross half the herd onto Beef Shorthorn and Whitebred Shorthorn for regular cash flow. Highland sales can be very unpredictable; some years, we may sell a lot and others, hardly any. As Angus always says, ‘you’ll always have good heifers, but you won’t always have good prices’.”

“All our heifers are for sale up until they have their first calves; we do not sell cows. We bull our heifers at 3-years-old to calve just before they turn 4.”

“Highlands are a slower maturing breed, so bulling later gives them more chance to develop before they are in-calf. Also, it gives us a longer period to sell them as heifers.”

“We find the crosses are very easy to sell every year. Thanks to hybrid vigour, Shorthorn crosses well with the Highland producing a fast-growing, large framed animal even from a smaller Highland cow.”

They sell all cross-bred calves and Highland steers privately in May to an organic farm in Ayrshire.

On the other hand, they keep a small number of bull calves every year and sell these to other Highland breeders.

All Highland heifers are for sale; prices vary depending on several factors, including animal quality, pedigree and their bloodline’s popularity. 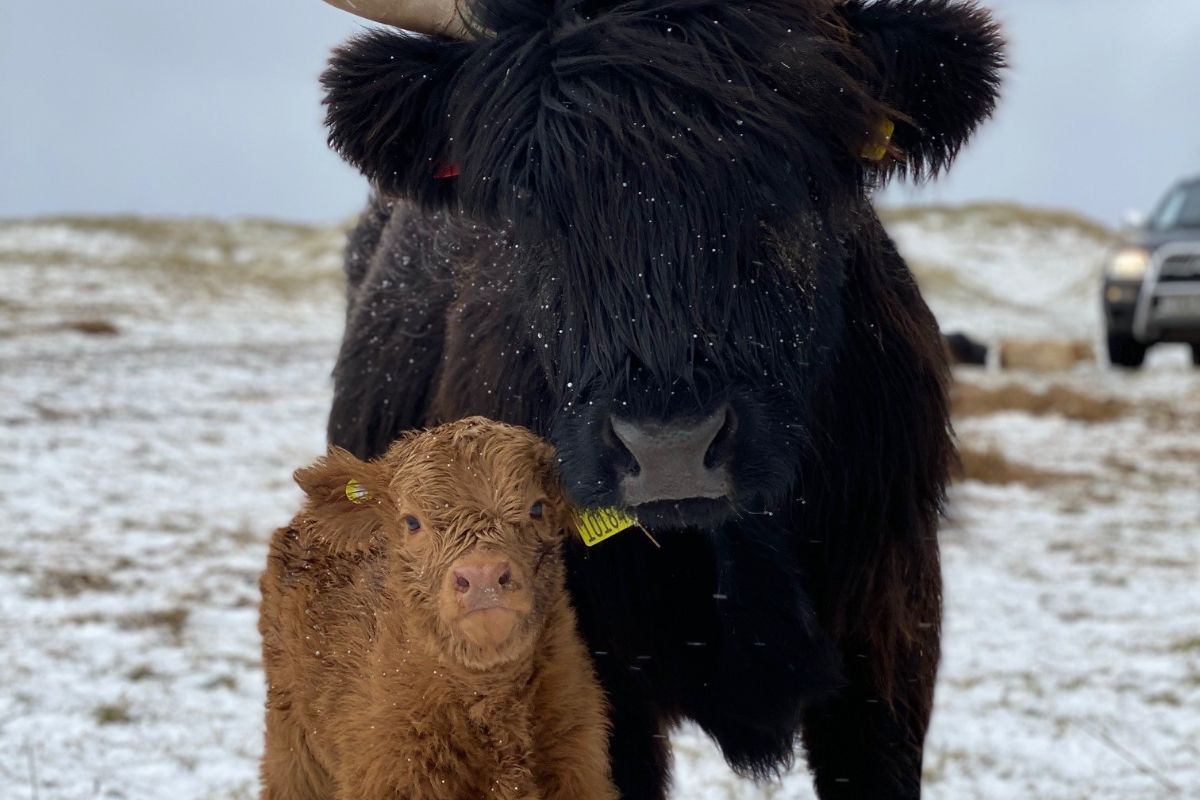 The family runs up to five pedigree Highland stock bulls to increase the gene pool and have two Beef shorthorn and one Whitebred Shorthorn bull.

Calving takes place from April to June every year to make use of the better weather and daylight hours for travelling to the tidal island of Vallay every day.

“We, in particular, are incredibly strict on feet and udders. We want our cows to have good feet, believing in a butcher’s knife over a foot trimmer.”

“And the same is said for helping a calf onto an udder; the teats need to be a reasonable size so a calf can latch on without assistance.”

“Big bottle teats are unacceptable, and the majority of our cows have teats no bigger than your index finger but are still bursting with milk. We think that most feet and udder problems within the Highland breed are primarily genetic.”

A free pass for cows

Now that they have brought their breed standard to a satisfactory level, they will focus on the herd’s productivity.

“We give a cow one free pass in terms of missing a calf up to the age of ten. And then if they breed every year after that up to the age of 15, then we think that this cow has paid her way, and she has earned her right to live out the rest of her days on the farm, whether she takes to the bull or not.”

“As our cows are bulled on rough terrain during the summer, we do experience lower scanning rates than we would like. On regular occasions, we had had cows breeding into their twenties; our oldest ever breeder was 25.”

Carianne and her husband run a flock of about 300 sheep, mainly Blackface and Scotch Mules ewes, and Blackface, Aberfield, Abermax, Texel rams, on their own croft, separate to the main farm.

Lambing takes place from April May, with all females retained for a hogg scheme, except for Abermax-crosses which they sell in local marts with all male lambs. 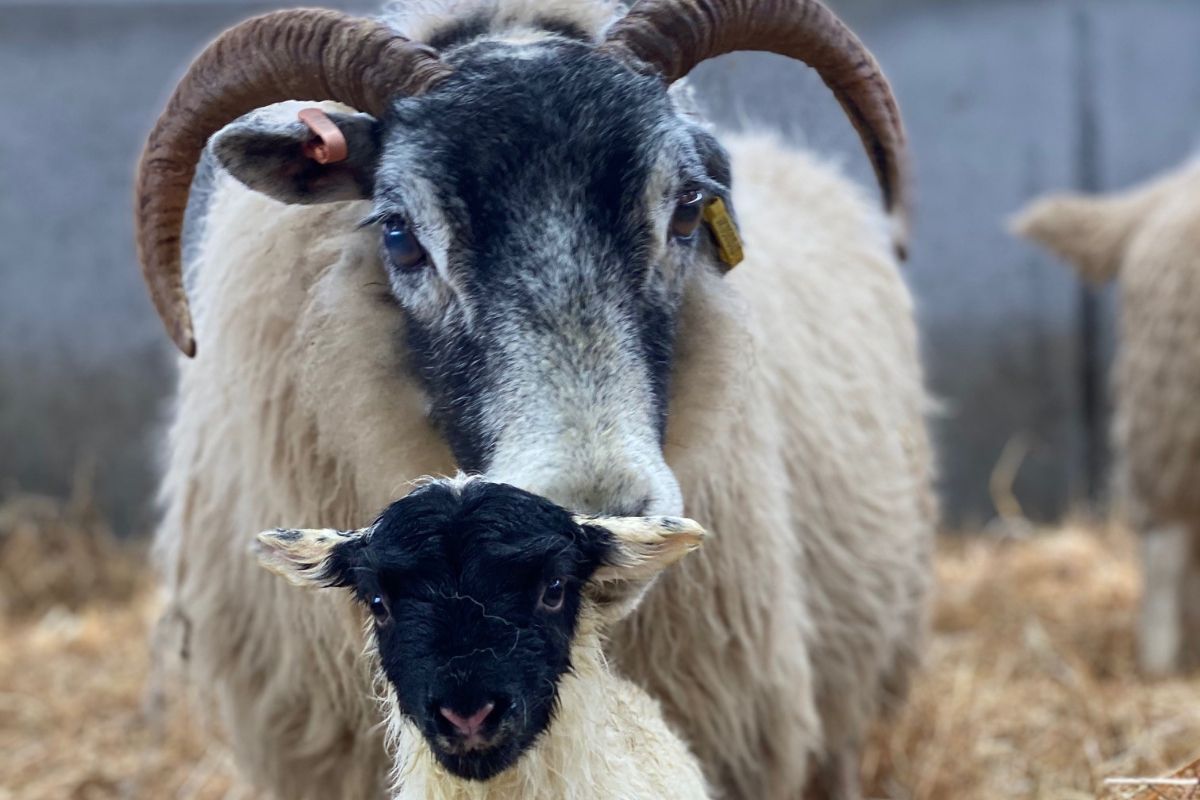 As the MacDonalds are organic, they are not permitted to use artificial fertilisers. So instead, they fertilise all their crops and grazing with thousands of tonnes of seaweed taken straight from the beaches on their doorstep.

Also, they plant approximately 120-150-acres of indigenous oats, rye and barley for an arable silage crop. They often undersow this crop with a grass seed to improve grazing quality for the 3-4 years that the ground is left barren on crop rotation.

Besides, the family have two Iron Age-cross pigs that are mainly for ground improvement on their croft.

“We have a lot of land wasted with rushes and weeds, so they are digging all that up for us. Then, once we move them onto a new bit, Fraser levels out the ground and plants new grass seed, which becomes fresh grazing land for sheep and cows.”

“The weather is one of the most significant challenges. As we are on an exposed island in the northwest of Scotland, we get a regular battering by Atlantic storms and experience an insane amount of rain.” 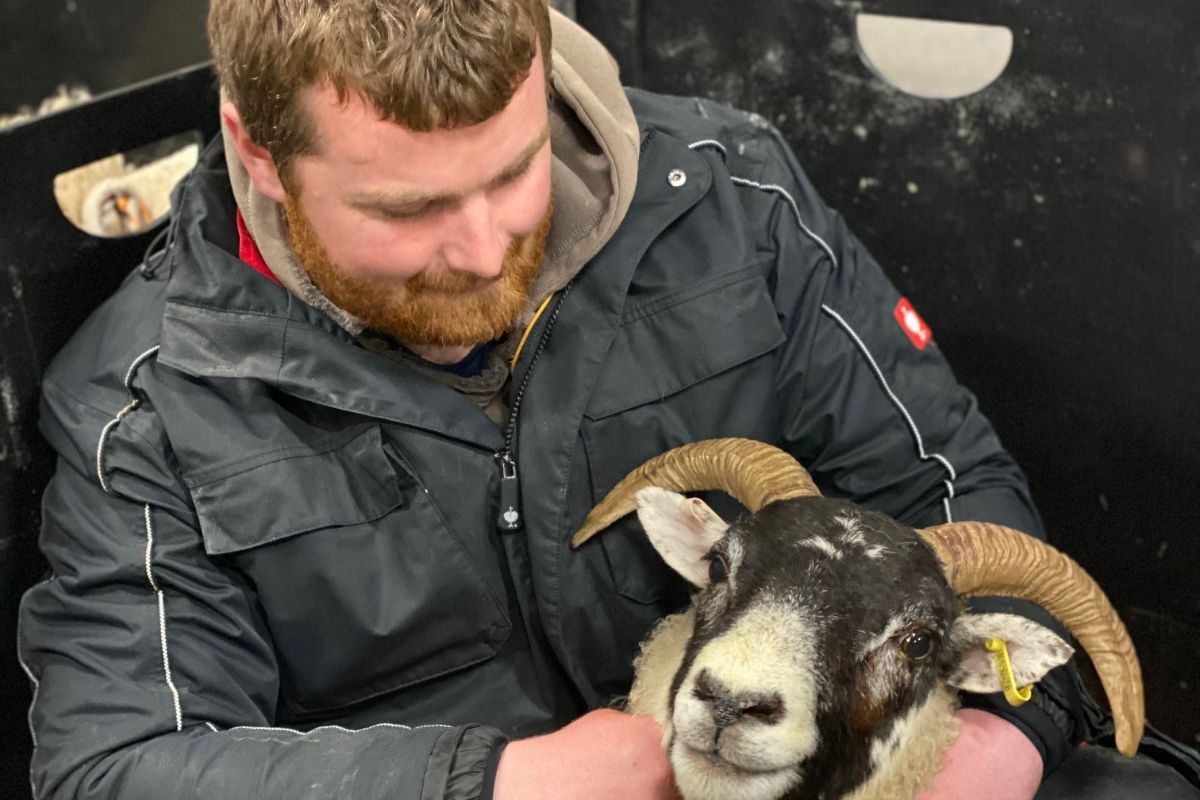 Women in agriculture and goals

Reflecting on her experience to date, the 27-year-old, said: “Farming is one of the most challenging but most rewarding careers in the world. We all owe our lives to the land at the end of the day.”

“I have a lot of respect from all the male workers within all the family businesses. They are most impressed with the fact that I do most of my job by myself.”

“There are far more women in the agricultural sector than there has been in year’s past. Even on our small island out here, numerous lady crofters manage their land very efficiently and effectively by themselves.”

“I have seen a lot of influencers on social media – especially that are helping young women see that they could have a career in agriculture – even if they do not have an agricultural background.”

“My ultimate goal is to get financially secure enough for my husband to phase out the family construction business to work full-time on the farm alongside me. That is his ultimate dream, and we hope it can happen someday soon.”

“Besides, we plan to finish building our croft house on our croft and eventually start a farming family of our own one day,” Carianne concluded. 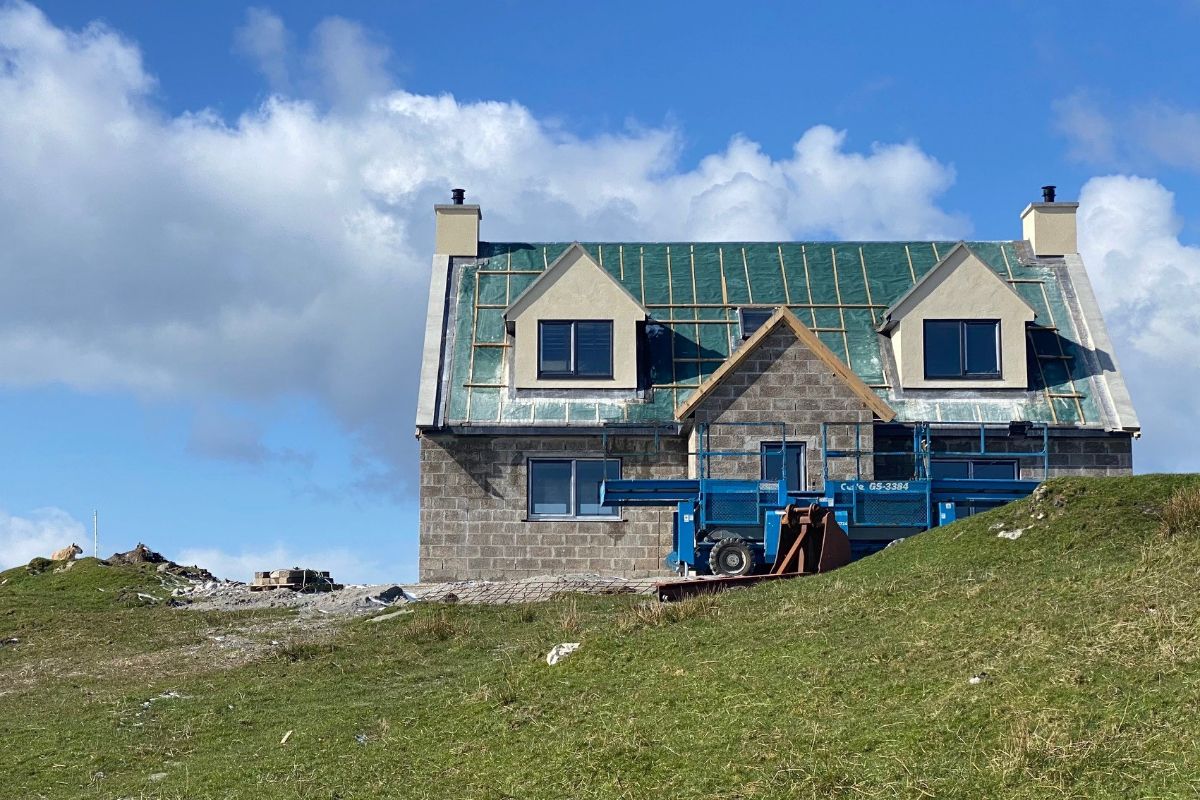