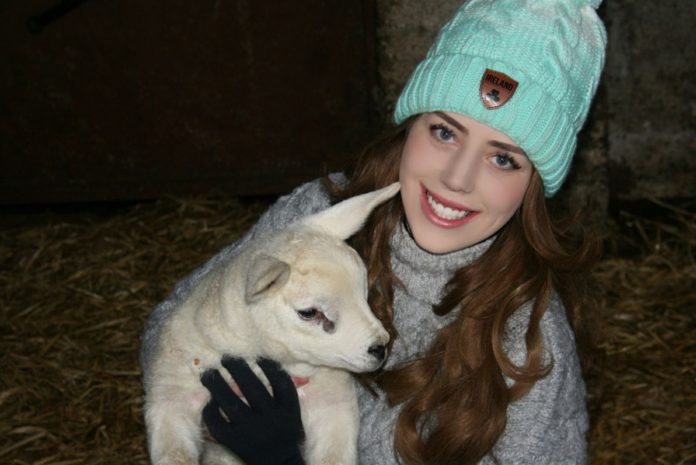 ‘I always wanted to be a livestock auctioneer’

Donna Vidal is a progressive sheep farmer chasing a career in property auctioneering.

The 25-year-old farms her 100-ewe Royal Flock on a full-time basis, whilst completing an MSc. in Real Estate.

She worked as an auctioneer in 2015, after completing an apprenticeship with IPAV, but left in 2019 to pursue her sheep farming endeavours.

Spending time with her grandfathers throughout her childhood ignited the Trim, Co. Meath native’s passion for agriculture.

“I remember my grandad bringing me to Ballymahon Mart to sell our lambs when I was very young. The auctioneer let me sell our pen of lambs, and that was where my love of auctioneering started,” Donna Vidal told That’s Farming.

“Both of my parents come from farming backgrounds and own a construction company in Mullingar, Co. Westmeath. My mum is very passionate about horses, so I spent my childhood competing with horses.” 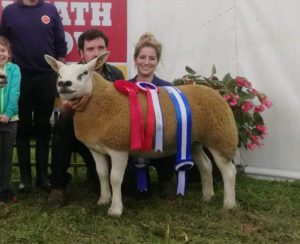 Although the family had a flock of commercial sheep, Donna never expressed an interest in them as a child. However, little did she know that the purchase of a Kerry Hill at the age of eighteen would change her vision.

She bought 15 ewe lambs from a breeder in Galway and has grown her flock in recent years with additions from the UK.

“They were a great breed to start with as they are hardy and low maintenance. My Kerry Hill Sheep are outside all-year-round. I let the ram out in November and lamb in April.”

“This way, the weather is generally good, and they lamb outside. I have never had to assist a Kerry hill ewe lambing. I regularly have ewes with triplets, and they have no problem rearing them. Kerry Hill ewes are great mothers.”

“There aren’t very many breeders in Ireland, so I would like to try and promote the breed to encourage new breeders.”

“I sell a lot of rams to the west of Ireland where farmers breed them to a horned ewe. The Kerry Hill x horn ewe is a great cross, and ewe lambs make super breeding ewes.”

Furthermore, Donna began breeding Texel sheep in 2017, whilst working for Property Partners McDonnell in Mullingar, and has grown her flock to twenty ewes.

She purchased her first ten Texel ewes from the Dunlever and Millfarm Flocks, Michael, and Kenneth Bird.

The second year, she acquired ewes from Northern Ireland and flushed them. That same year, she also secured the internet famous, Holly and Heidi, from the Racepark flock in Roscommon.

“I have had a lot of success showing Holly and Heidi – they are my daughters. They have been the reason I have become so passionate about the Texel breed.”

“When I meet people at sales and shows, they often say: ‘I know you, you’re the girl who owns Holly and Heidi’.”

She flushes in October and lambs in March, using Kerry Hill-cross ewes to carry Texel embryos and will welcome almost 100 Texel lambs in early March.

Donna bought two rams from the Corbo and Alderview flocks at the Texel premier sale in Lanarkshire which she uses on flushing ewes, along with a range of frozen semen.

This year, she purchased privately from the Plasucha flock and the Auldhouseburn, Sportsman, Mellor Vale and Corbo flocks.

She snapped up a ewe from Auldhouseburn at the Select Seven In-lamb sale, Lanarkshire who is carrying twins sired by the 365,000gns Sportsman Double Diamond.

“I believe I am the only breeder in southern Ireland who will have progeny off Double Diamond, so I am very excited to see what he will breed for me.”

Donna, a member of the Texel Society and her local club, the north-east branch, also exhibits her flock at agricultural shows with success.

“Farmers who purchase rams from my flock are always very complimenting towards my stock, and I get a lot of repeat customers.”

“I always wanted to be a livestock auctioneer. I would love to work at pedigree sales, but currently, I seem to be making more progress on the other side of the podium, buying.”

“I enjoy lambing time. My boyfriend comes from a farming background, so he helps me at lambing time. He rears bullocks for slaughter, so I also enjoy helping him.”

“The most disheartening part of farming is losing stock. I feel such guilt if I lose a lamb. We rare pet lambs too, and they require a lot of work.”

“My pedigree ewes are treated like children. They all have their own names and know their names. My boyfriend used to think I was mad when I would call their names and they would follow me through the yard.”

Looking ahead to the future, Donna Vidal plans to grow her Royal Flock and her newly established Hereford herd, whilst simultaneously returning to the property field.

She stressed that the journey she has undertaken in the past seven years, in particular, would not have been possible without a support circle.

“All breeders I know have been nothing but encouraging to me. If I ever have any questions, all I have to do is pick up the phone. I am very grateful to have such great friends.”

“My uncle runs a large flock of commercial ewes and has been very helpful to me, especially when I first started breeding Texels.”

“I’ve experienced nothing but positivity in the farming community. I did have some problems with animal activists, but I had so much support from my farming friends that the good outweighed the bad for me.” Donna Vidal concluded.

- Advertisement -
Previous article
‘Farmers are full of knowledge; it’s very important to listen to them’
Next article
Beef prices to increase in Northern Ireland again next week