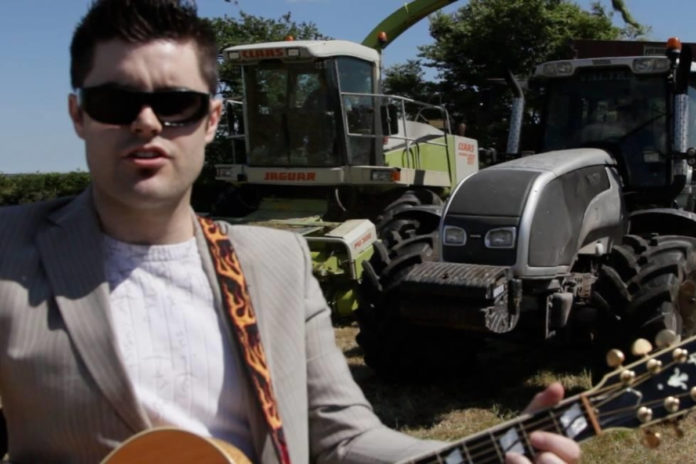 VIDEO: Celebrating 10 years of The Silage and Maize Song

Singer-songwriter and full-time musician, Michael Kennedy, is celebrating ten years since his hit song, Silage and Maize, took YouTube and the airwaves by storm.

The 34-year-old from Curraheen, Co. Cork, who is now based in Bandon, has always had a striking passion for machinery.

While his father, Dan, is what Michael describes as “an out and out city man”, his mother, Eileen, hails from a dairy farming background in Cullen, North Cork, whose maternal relations from Ballydaly, Millstreet were all machinery fanatics.

“As a child, I would be fascinated with the tractors on my grandfather’s farm.” Michael explained to Catherina Cunnane, editor of That’s Farming.
“My late uncle, Patrick O’Keeffe, was an absolute genius with tractors and anything machinery-related.”

Michael, an accomplished traditional musician (guitar accompaniment and tenor banjo) and versatile singer with a very broad repertoire, is credited as being one of the first to write one these new-type modern agri songs. “I could see the niche for a modern up-tempo quirky song about the silage craze, the buzz and the drama that goes with it every single year. It was just waiting to be written I felt.”

He heard the Machinery Song by the late Connie Collins which gave him some inspiration to write a new hit.

“I was also really lucky to grow up with 26-acres right behind my house and saw the silage being cut there by my contractor and friend, Mick McCarthy, (Lissarda) since I was a kid.”
“Watching that from a very young age is where I first got the idea to write about my love for the silage season.”
He religiously made a video of it every year with him camcorder from when she was seven-years-old, which, he said, shows “machinery was in my blood from day one”.

“Machinery spotting is total escapism for me. I don’t drink nor smoke so it’s just a form of getting away from everything – especially in the summer when I’m mad busy with music and need a regular and intermittent switch off.”
“The smell of freshly cut grass mixed with the whiff of diesel, the purr of machinery and rattling of trailers is great therapy for anyone who loves the gear,” he added.

Since the song was first released, Michael has featured on programmes such as RTE’s Nationwide and Countrywide while also receiving a multitude of airplay and radio interviews over the last ten years.

The YouTube video racking up at nearly 600,000 hits shows that the song is as popular today as it was all those years ago in 2010.

Even his follow-up song, The Tractor Lad, released in 2012, is also an online sensation with 300,000 YouTube views.

In 2018, Michael recorded a remix dance version which is also proving popular on the airwaves.

The Cork native plays a wide variety of music to suit every age group for all kinds of events.

He, like every other musician in the country, is currently unable to play gigs with the ongoing Covid-19 pandemic.

“While I would give anything to be back playing, it’s nice to have just one summer off to enjoy the silage at my ease without watching the clock.”
“I’m not sure my good wife Maeve would agree though.” he joked.