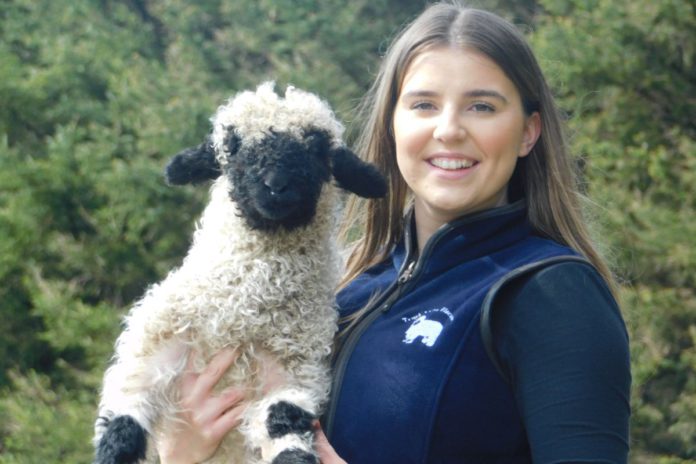 In this week’s sheep segment, That’s Farming, speaks to Cliodhna Muldoon, one of Ireland’s only Valais Blacknose breeders.

Cliodhna Muldoon’s interest in sheep began five years ago when she met her other half, Martin McCafferty.

He was the first person to introduce sheep farming to the 24-year-old, who has been a horse enthusiast from a tender age He has bred pedigree Charollais sheep for the last eleven years and pedigree Blue Faced Leicester sheep for the past three years.

“Martin told me to pick one of his home-bred Charollais ewe lambs, and I became instantly hooked,” she told That’s Farming.

“I still have the ewe to this day, and she has reared some fantastic pedigree lambs, including the champion ram lamb in Raphoe show and sale. In addition, she has proven to be one of the flock’s best Charollais ewes.”

“This achievement encouraged me immensely. Since then, I have spent every evening and weekend on the farm working with the sheep.”

“As a child, I grew up mainly around horses and had a strong passion for them. I started riding horses very young and just loved their gentle nature.”

“Unfortunately, due to attending college for four years, I did not have as much time to spend with them, and my desire for horses faded. Growing up, my uncles had sheep, but I had little interest in them,” she added. 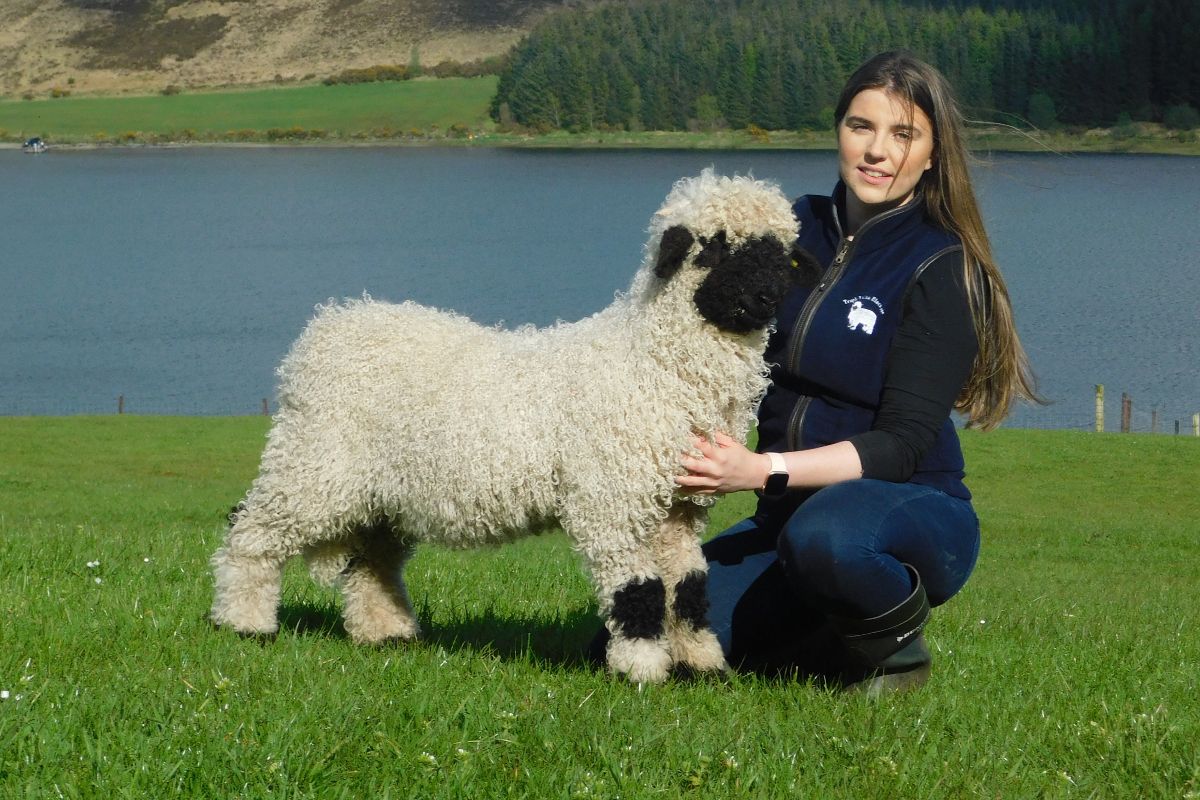 “Charollais sheep was the first pedigree breed introduced into the farm. We selected these because of their many traits, including their hardiness, hardiness at birth, fast fattening times and high percentage kill-out.”

“The breed fits in well into our system of early lambing. We sell ram lambs at 8-9-months-old for breeding into pedigree and commercial flocks. Furthermore, we retain a percentage of ewe lambs for replacements while we sell the remainder for pedigree breeding.”

“Besides, we cull lambs, which are not suitable for breeding, to ensure we use only the top pedigree animals for breeding purposes.”

In 2018, the Ballybofey, Co. Donegal native established her own flock of registered pedigree Valais Blacknose sheep.

She “instantly fell in love with this breed” after seeing it at Omagh Show in 2018. Later that year, she acquired her foundation ewe, and her Trusk Valais Blacknose flock has grown ever since.

Muldoon is a part-time sheep farmer who works as a scientific officer clean drinking water microbiologist for Northern Ireland Water.

Cliodhna chose the Valais Blacknose sheep breed as “they have presented a sense of uniqueness within the flock”. “These sheep stand to their name as ‘the cutest sheep in the world’ because of their distinctive gentle nature, their beauty and elegance, as well as their distinct features.”

“I find that the Valais are a naturally docile, friendly breed of sheep, making them such perfect pets,” she added.

The Valais Blacknose Sheep originates from the Valais canton of Switzerland. The Blacknose graze in the Alps in the summer months and are housed during winter. The Blacknose is a sturdy breed that has adapted well to the mountain’s harsh conditions.

It was thought that the Blacknose existed since the 15th century. However, their appearance has significantly changed as they once resembled the likes of the Scottish Blackface.

“Over time, characteristics have evolved to the majestic sheep that we see today. Valais Blacknose sheep have a black nose that extends up to the centre of the head, connecting and encompassing the black surrounding the eyes.”

“Their ears are black to the point where they meet the head. Knees and hocks have black spots, and the hoof/ankle area is black, creating the impression of black boots.”

“Ewes have a black tail spot; rams do not. Horns are helical or spiral and grow outwards from the head in both the ewes and rams. The wool is an important characteristic, and the whole body, head and legs are evenly well-covered, exhibiting the sheep’s robust frame.” 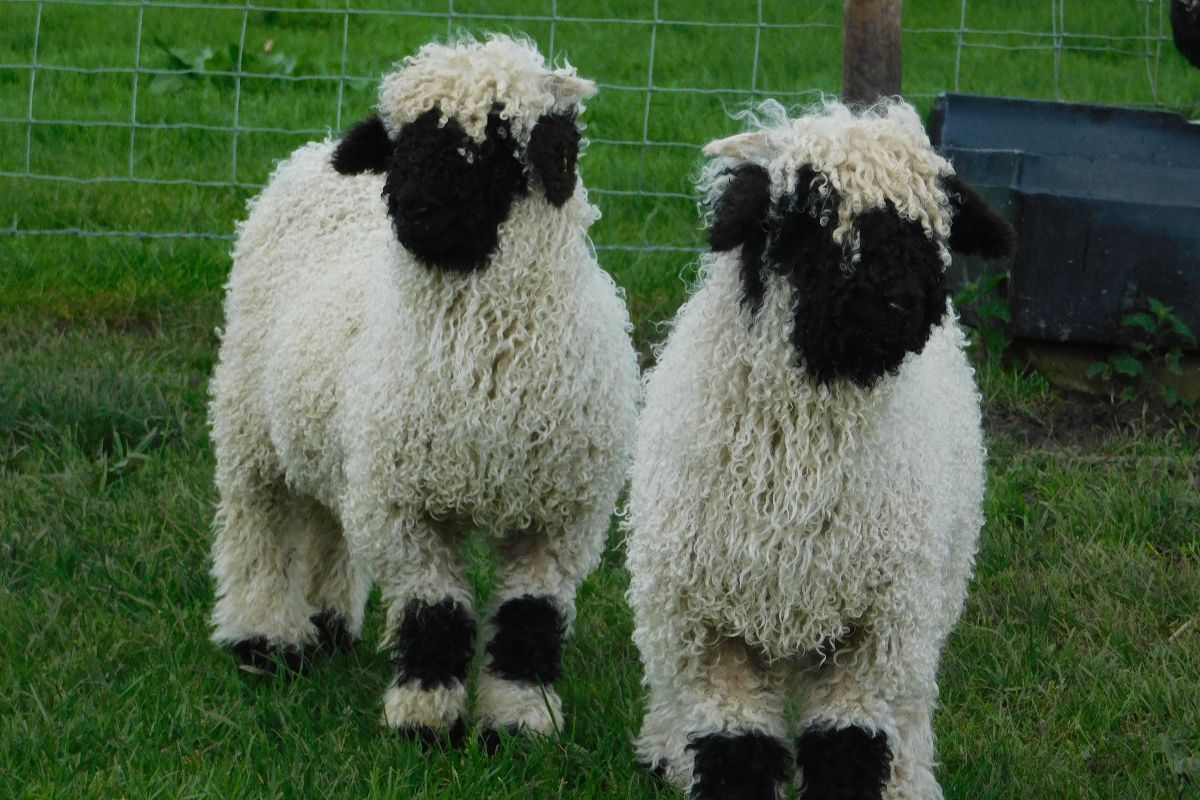 ‘I was completely hooked’

“I remember turning to Martin and telling him how lucky anyone would be to own these sheep, and no way would it be possible for me to get one because of the scarcity.”

“Honestly, I was completely hooked on them. I kept going back and forth from the pen all day. Then, finally, I came home that evening, and I spent hours researching these sheep. I spent probably every day talking about them.”

“Later that year, Richard Beattie from Omagh had a production sale, where I purchased my first foundation ewe.”

She has developed her flock with further purchases, allowing the introduction of new bloodlines. Her most notable purchase was a daughter of the famous Highland King Kong.

He is “one of the most remarkable sires within the breed”, and this King Kong daughter has left her mark within the flock, consistently producing lambs that adhere to the breeding standards for Valais Blacknose sheep.

She has used embryo transfer (ET) technology, which has allowed her to multiply elite genetics within the flock. Careful management, coupled with a progressive breeding strategy, ensures that donor ewes are in optimum condition before embryo transfer being carried out.

“I find that the donor ewes must be in optimum body score condition and on a rising plane of nutrition to ensure a successful flushing,” she added.

During March and April, she lambs Valais indoors along the Bluefaced Leicesters, using cameras to monitor the flock during the season.

“Besides, we feed ewes a 19% protein concentrate six weeks before lambing. They also have access to a mineral bucket to achieve good birth weights, vigorous lambs, and high-quality colostrum. We divide ewes based upon their scanning results and feed them accordingly.” 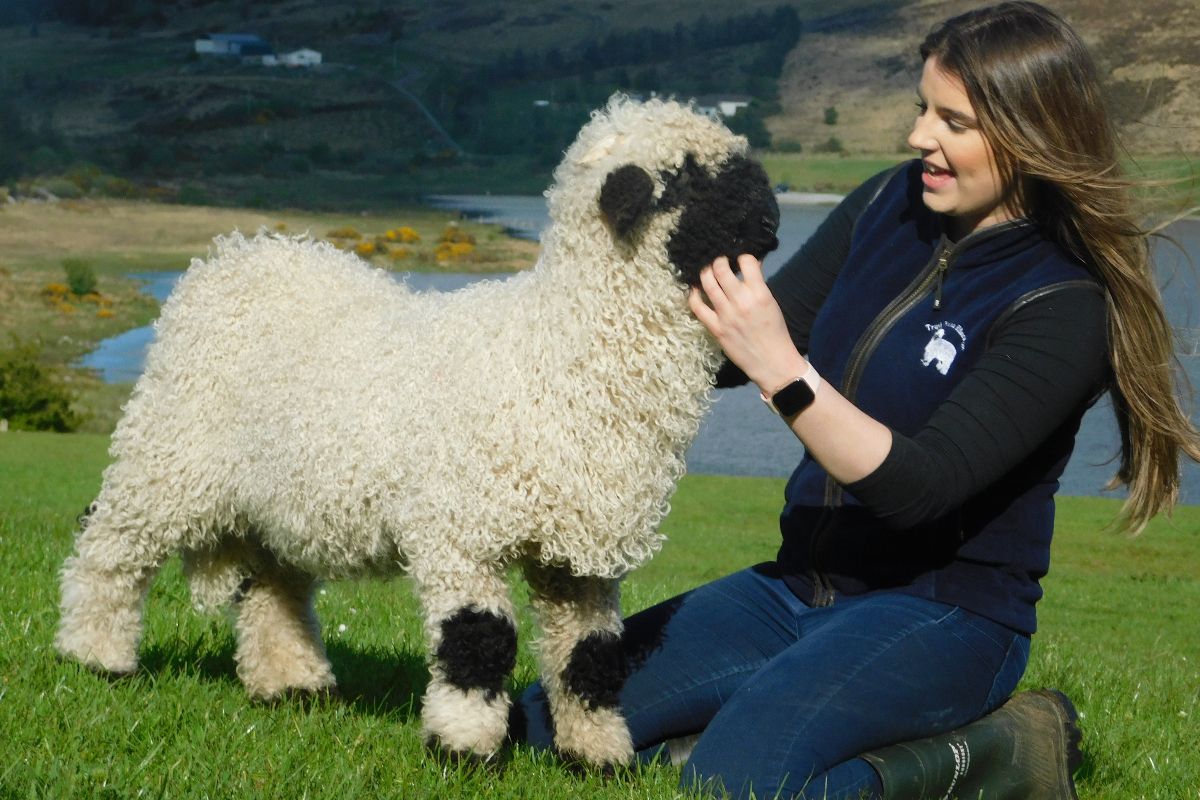 The fruits of their labour

“Lambing time is the most enjoyable aspect of farming for me. It provides me with a good indication of how well my breeding strategy has performed.”

“I enjoy every moment spent in the lambing shed watching the newborns bouncing around in fresh straw with full bellies of milk.”

“I love the hands-on experience gained from lambing as every year there are always new experiences and new challenges faced. As every farmer can agree, a happy lamb means a happy farmer.”

According to the 24-year-old, the biggest challenge facing this breed is the scarcity of the Valais Blacknose. In addition, she said it is becoming increasingly challenging to source unique bloodlines and Valais that uphold the breeding standard.

“Balancing work and farming is also quite challenging, usually resulting in late nights and early mornings and pushing myself to complete all the sheep jobs. But at the end of it, the hard work pays off,” she added. 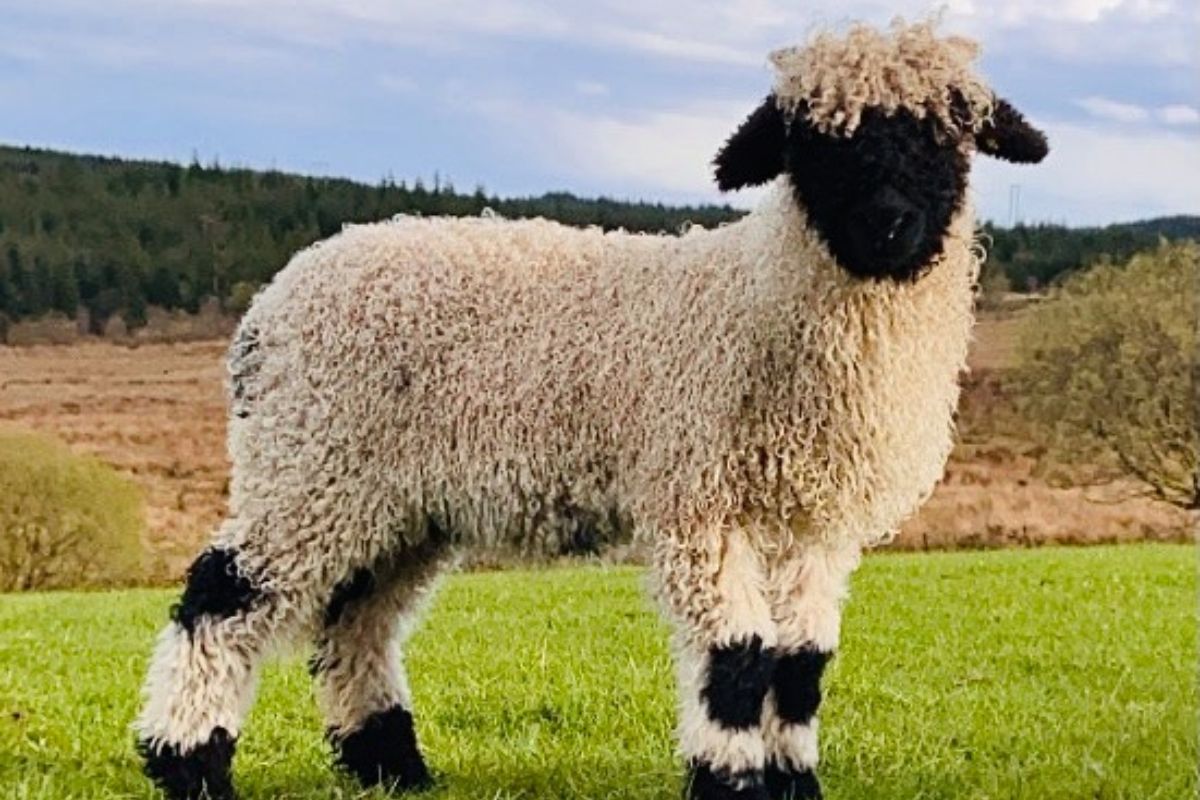 The couple and other breeders are currently in the process of forming the Irish Valais Blacknose Sheep Society Ltd.

“We are hoping to be in a position shortly to be able to register Irish born Valais Blacknose sheep and to trade with EU counties and the UK,” she added.

“Every year, I see a rise in demand in the Valais. Not a day goes past where we receive a phone call or a text enquiring about purchasing them or coming to see them.”

“When the Valais are outside in the fields, people stop to take pictures, and you can get a sense of joy from people when they see them. With the increase in demand for Valais Blacknose sheep, the lambs are often booked 12 months before they are born.” 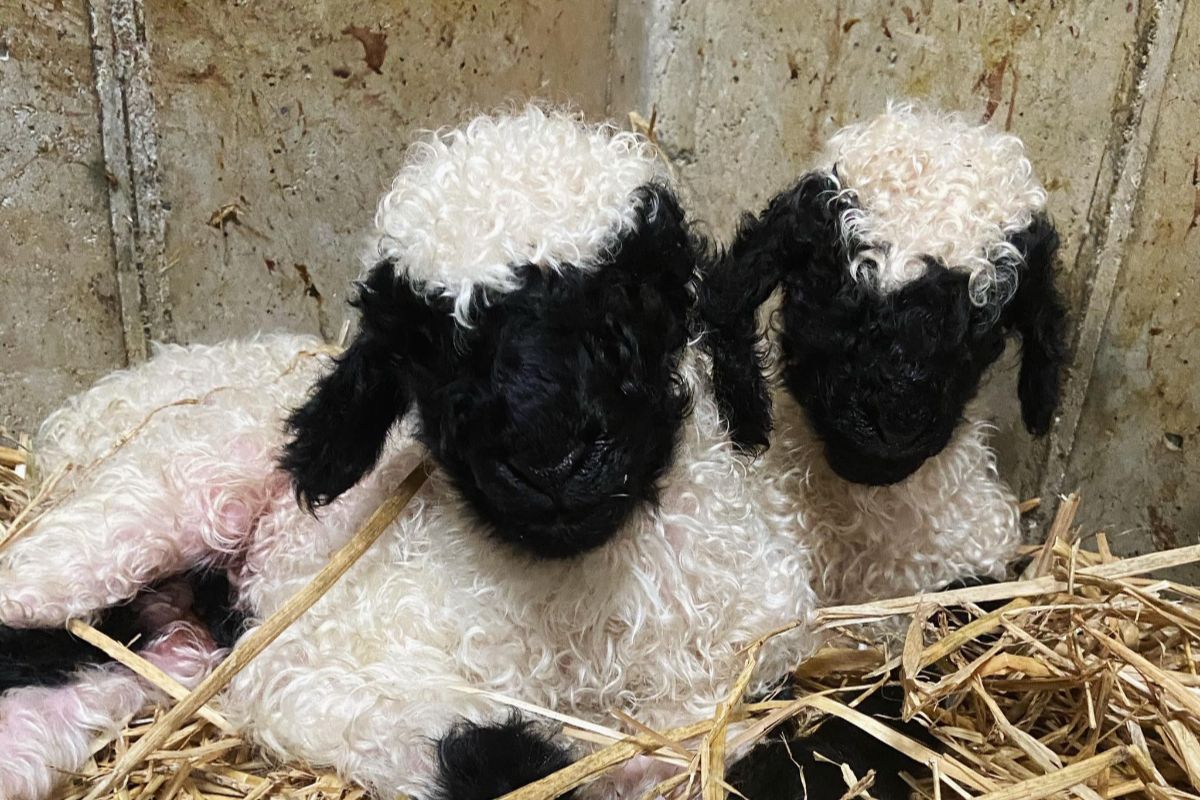 Vying to become one of Ireland’s top breeders

The future plan for Trusk Valais Blacknose is to expand the flock by introducing new and unique bloodlines annually and to decrease the amount of embryo transfer work undertaken.

Muldoon desires to focus on ensuring the quality of the flock is maintained to a high standard to consistently produce “some of the top pedigree breeding ewes and rams in Ireland”.

“In 5 years’ time, I hope to accomplish success in breed society shows and sales. I look forward to seeing how my home-bred Valais Blacknose lambs have produced quality offspring for other breeders.”

“My ultimate goal is to breed the supreme champion animal in an Irish Valais Blacknose sheep society show and sale.”

“My journey started with one Valais ewe and one Valais ram, and in 2018 my dream was to walk out every morning and evening to a field of Valais Blacknose sheep. With a lot of hard work and overcoming endless challenges, the dream has now become a reality.”

“Starting up my own flock of Valais Blacknose sheep has been a challenge, but I wouldn’t change it for anything. I believe to have success in pedigree breeding; you must be 100% committed.”

“It has been the most rewarding journey I have undertaken so far. Seeing my own lambs jumping through the field gives me a sense of achievement. I would advise anyone who is contemplating starting their own pedigree flock to go for it,” she concluded.