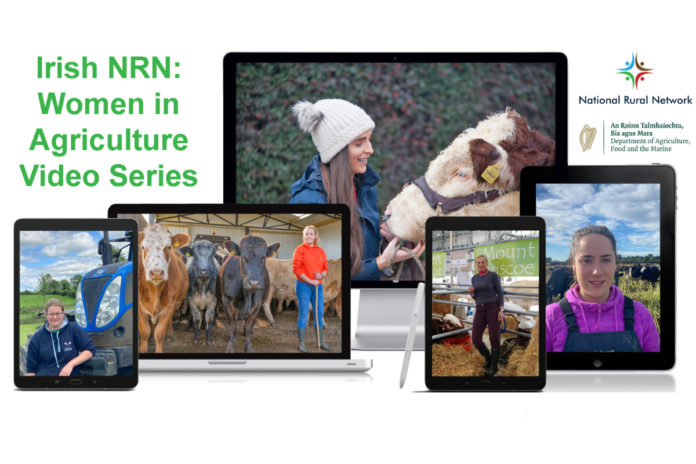 The Irish women in agriculture video series details the experiences of five females involved in different areas of agriculture and highlights their dedication and commitment to farming.

While farming was traditionally a male-dominated profession, data from the Central Statistics Office (CSO) shows that of the 265,400 people who worked on farms in 2016, over a quarter were female (71,700).

However, less than one quarter (16,100) of these females were holders of the farms on which they worked.

The NRN’s video series, however, it said confirms a new era for women in farming and shows resilient and innovative women leading the way on Irish farms.

The women featured in the series are: Sinead Conry, a Pedigree Hereford breeder from Roscommon; Deirdre Divilly, agricultural science student and dairy farmer from Galway, currently on placement in New Zealand from University College Dublin (UCD); Margaret Edgill, an organic farmer from Offaly; Aoife Forde, a suckler farmer based in the Burren in Co. Clare; and Daphne Scott, a sheep farmer based in Co. Cavan, who also runs her own dog grooming, boarding kennels and mobile pet farm under the name Precious Pets.

Speaking ahead of the launch of the series, Dr Maura Farrell from the NRN and NUI Galway said, “These videos challenge traditional perceptions of women in Irish farming.”

“The women in these videos are highly innovative, resilient and dedicated to farming, similar to many other women on farms across Ireland.”

“Their expertise and commitment reinforces my belief, that a good farmer is a farmer irrespective of gender.”

The first video in the series will be shared on That’s Farming tomorrow.

- Advertisement -
Previous articleVIDEO: Life as a sheep shearer
Next articleFarm group reacts to possibility of compulsory EID tagging for cattle

‘Cutting down or stealing a STOP sign is not a game’

‘When I was at school, I was told agriculture was not an occupation for a woman’