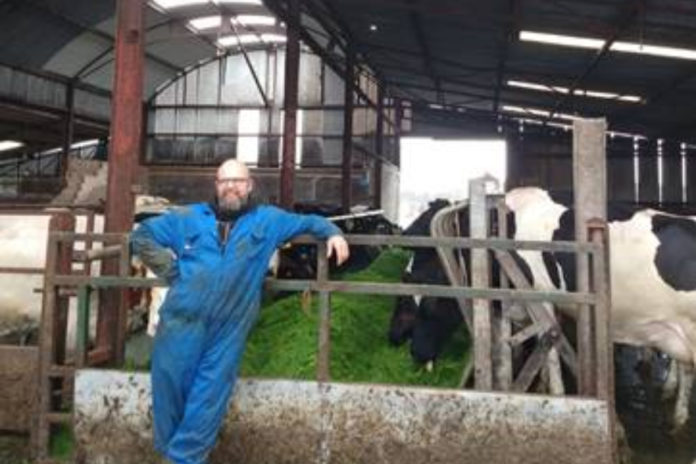 Roy McLean left his career in computer programming in 2004 to carry on the dairy farming family tradition following his father’s retirement.

The family has been farming in Straid, County Antrim for at least six-generations.

“My father established the current milking herd on the farm in 1963, although cows were milked and even butter churned previous to that,” he explained to Catherina Cunnane, editor of That’s Farming.

His wife, Naomi, is the other partner in the farm business, while their eldest daughter is currently studying veterinary medicine in Warsaw, but maintains a keen interest in the farm, helping during holidays.

Their eldest son, Andrew, is currently working on the dairy enterprise as part of his farm apprentice qualification.

Sitalane Farm is home to pedigree Holstein Friesian and British Friesian cows with Holstein bulls. Over the last number of years, cow numbers have fluctuated between 80-90.

The herd is milked through a 12-a-side swing-over DeLaval herringbone, with milkings taking place at 6:30 am and 6:30 pm. “A lot of cows are dry at the moment, so it only takes an hour but takes two hours when they are all in milk,” Roy explained.

They have recently transitioned from all-year-round calving to a season-spanning July-February. “The first reason for this was to provide a break for ourselves and the calf rearing facilities.”

“As well as providing an opportunity for increasing calf hygiene, it is also a useful break to take stock of the number of pregnancies achieved, number of replacements on the ground and identifying poor-performing individuals.”

Calving gets underway in July to build production in the autumn to take advantage of winter premium payments. Stale cows are also very efficiently fed on spring grass.

All heifers are reared on-farm as replacements, while all bull and beef calves are sold at 4-8-weeks of age – either privately to neighbours or at Ballymena Mart.

The aAa breeding tool that they use to match each individual breeding female’s needs with six factors analysed; dairy, tall, open, strong, smooth and style.

“I found that the herd was generally lacking in smooth and style. Therefore, we have sought to use bulls with these qualities, but they are not common in the Holstein breed.”

“I did find them in British Friesians though, producing cows with much greater width, capacity and ability to carry condition in a grass-based system.”

Longevity is extremely important on this farm with the goal being mature cows who give 10,000L a year at 4%+ butterfat, 3.3%+ protein and remain in the herd until they are at least 10-years-old.

“The ideal cow should also breed back easily and be able to manage her own body condition on a grass-based system.”

“We prefer medium-sized to large cows who are as wide as they are tall with laid-back temperaments.”

The breeding season gets underway on October 1st and wraps up on May 31st. 100% AI is used on the farm with sexed Holstein/Friesian semen in the first 90 days and beef sires generally chosen for repeats.

However, this year due to an acute replacement shortage, they have experimented with Montbeliarde genetics. “The thought being that the male calf will be more attractive to the beef purchaser.”

Concentrate usage has been identified as an area for improvement with usage creeping up to over 2.5T of concentrate per cow per year.

Great improvements of over 100kg per month per cow have been observed since the introduction of zero-grazed grass, Roy said.

The McLeans have two constraints on grazing which they recently sought to overcome using a zero-grazing machine.

“Firstly, our farm is split by a road and, together with neighbouring houses, leaves us needing up to five people to bring cows in from furthest away fields.”

“Secondly, we do not reside in an area with weather and soil conditions suitable for a very long grazing season.”

“Therefore, we only graze during the day with the cows receiving a wagon load of grass indoors overnight,” Roy added.

Their goal is to graze cows from late March to early October on a rotational grazing system during the day, with zero-grazed grass being fed at night from early March to early November.

“It is also rotational, but a slightly longer rotation can be used making more efficient use of nutrients with a larger leaf area for photosynthesis.”

With a belief that there is always room for improvement, Roy and family have earmarked a number of goals.

They are aiming to reduce concentrate input to under two tonnes per cow and increase milk from forage.

Increasing their milking herd size to 100, improving forage quality to reduce reliance on concentrates and improving cattle accommodation are among their future targets.

“Farming fortunes have always been volatile – especially in the current climate. So, my goal is to become more resilient to mitigate those risks.”

“As farmers, we need to be especially diligent to strive for a good work/life balance.”
“I recently heard of a farmer who hadn’t missed a milking in 27 years.”

That, he added, is not healthy leading to stagnation/burnout/breakdown, however, he admitted, it is very difficult to achieve that balance when margins are tight.

“We try to prioritise improving our efficiency on producing litres rather than simply striving for more litres. More cows always equals more work, but not necessarily more profit.”

“I feel privileged to be able to care for a herd of dairy cows. They are remarkable creatures providing such an abundant harvest of nutritious milk from vegetation such as grass that is inedible to humans.” Roy concluded.