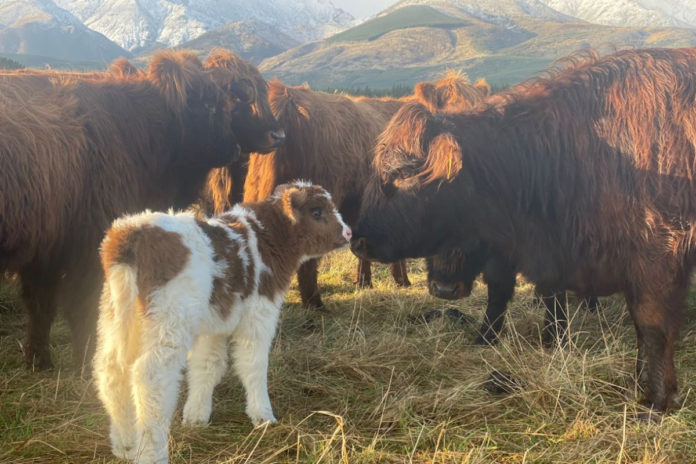 An organic farmer from Southland in New Zealand, is credited for breeding a rare variety of Highland cattle.

He has dedicated an astonishing twenty years to the development of Tufty® cattle, which are polled Highlands.

Tom Gow of Mangapiri Downs Station has farmed organic Highland cattle since the 1980s, however, he was concerned about the danger horned animals can pose.

He enlisted the help of his uncle, the late Scott Dolling, a geneticist from South Australia, to push his breeding programme in an alternative direction, the result being a new bovine breed.

Speaking to Catherina Cunnane, editor of That’s Farming, Gow, who runs 4,000 stock units on 469 hectares, said: “Unfortunately, horned Highland cattle are a remnant of the past.”

“With the help of my geneticist uncle Scott, Dolling, we were able to breed a rare variety of polled Highlands from our large Highland fold.”

The polled animals were the result of breeding animals in the herd which had poorly developed horns.

“One of my daughters, Melinda, when she was younger, named our organic polled Highlands TUFTY® cattle.”

“From our point of view, TUFTY® cattle are the easiest choice for marginal, rough country performing well anywhere in New Zealand.”

They are easily handled, solid, beefy stock with great longevity, he added.

“They have a long, thick, hairy coat. Colours can range from black to brindle, dark brown, red, tan, yellow, dun, creamy and even skewbald (which my youngest daughter, Nikita, when she was young named ‘cupcake’ type when the first one was born). This new calf is of the cupcake-type.” added Gow, who explained that the breed’s colourful pelts are valuable as rugs.

He said that the breed is suitable for organic farming systems, due to their high natural immunity to parasites and diseases.

“Hardy, hairy, happy, TUFTY® cows and calves look unique, curious, and friendly out in the paddock. They can make great pets or top-quality beef breeders.” he added.

Gow revealed that chefs around New Zealand “love the tasty, lean TUFTY® beef”, due to what appears to be lower levels of fat and cholesterol, with a higher protein and iron content.