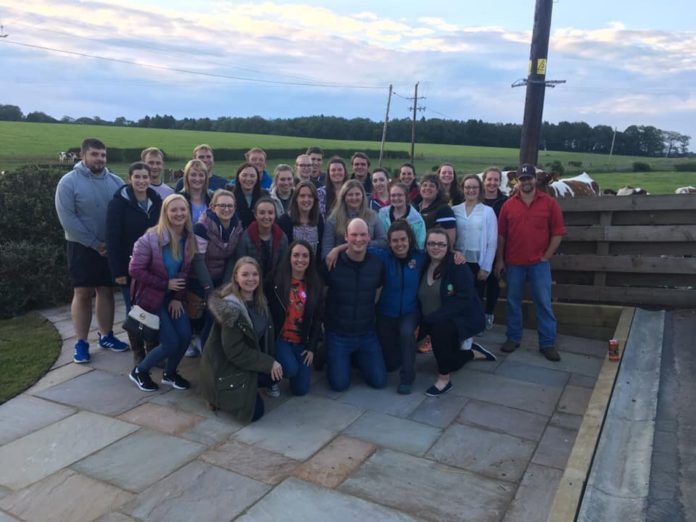 I, along with, 13 other Young Farmer Club members from all corners of the world such as Canada, USA, Tasmania, New Zealand, Switzerland to name but a few, were very fortunate to represent our respective clubs in Scotland last summer, writes Gillian Moore, Barryroe Macra Club, Carbery Region.

Our first day was spent in Anstruther town where we got a tour of the local Lifeboat Station and a chance to sample ‘the best fish and chips’ in Scotland.

We then went on a tour of a soft fruit farm, who produce some of the earliest strawberries, blueberries and raspberries in the country and supply their delicious produce to Aldi and Tesco.

This was followed by a quick stop-off at St. Andrews before heading to Balgove Larder Farm for a superb butchery demonstration by the award-winning traditional craft butcher, James Lothian. The night was finished off with a 10 out of 10 steak in the Balgove Steak Barn.

On the second day, we all moved to Ayrshire. Here we were introduced to the Aryshire Young Farmers Club members and our host families.

The first day in Aryshire started with a tour of a fully automated and robotic dairy farm. This was followed by a visit to Europe’s second-largest wind farm which has 215 turbines, generating power to almost 300,000 homes.

That evening was spent stock-judging dairy cows which was very interesting. Throughout the week, we went on several museum and castle visits, including a visit to the birthplace of Robert Burns who is today considered Scotland’s national poet.

We also visited a poultry farm which had 38,000-free-range laying birds, several beef and sheep farms and an arable farm which had developed its own anaerobic digestion system.

For the last four days of the trip, we returned to Edinburgh for The Royal Highland Show. This was one of the highlights of the trip. There was a vast array of outstanding livestock, exceptionally tasty local foods and drinks and impressive hand-made arts and crafts.

The partnership between Macra na Feirme and the Scottish Association of Young Farmers Club (SAYFC) provides a great opportunity for many people to meet and share their interest and experiences with one another.

The exchange programmes are a fantastic aspect within Macra na Feirme and I would encourage all members to apply for one of the exchanges.