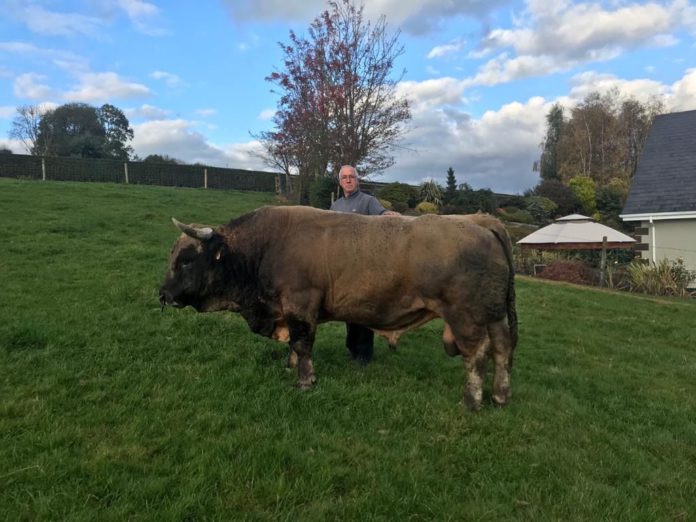 Aubrac breed ticking all the boxes for 70-cow suckler farmer

The seventh-generation farmer left school at 14 and later took the reins of the family farm in 1990.

His father was involved in dairying, but Alfie decided to go down the suckling route.

Over the years, he farmed a “rainbow” of continental breeds, but a trial with the Aubrac breed in 2012 paved the way for the enterprise’s future.

“I bought an Aubrac bull from Ernest Mackey to run with commercial heifers, and it all snowballed from there,” he explained to Catherina Cunnane, editor of That’s Farming.

“When we saw his cows, Marion, my wife, said to me: ‘they are the types of cows we were trying to breed.’ We were tweaking different breeds trying to get what we wanted.”

‘The nearest to perfect’

“We finally found all the desirable traits we want in sucklers in one stand-alone breed. Aubracs are the nearest to perfect that I have stumbled upon.”

The following year, they saw what the breed brought to their herd, which prompted them to purchase a second bull from Ernest to run with cows.

The breed’s performance on a commercial scale influenced their decision to venture into pedigree breeding.

They acquired eight Aubrac cows, four from Mackey and the remainder from Paul Grace.

“They were a mixture of in-calve cows and pairs. The next year, Paul decided to venture into dairying, so we bought another eight females from him and retained replacements to build up numbers.” 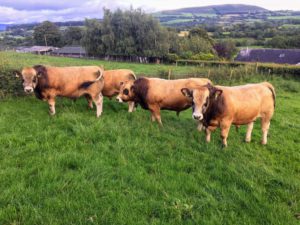 Since then, the herd, managed under the Slaneymill prefix, has grown to consist of twenty pedigree breeding females. They also farm a 50-strong commercial herd, with Simmental-influence, which run with two Aubrac bulls.

Poupeii, an Aubrac bull he acquired from Grace, who appeared at the Ploughing and various agricultural shows over the years, has had the most significant influence on the pedigree herd.

The now 13-year-old stock bull is still one of the main sires on the farm, along with another.

“My ideal breeding female is one with a strong bone, width, depth and correctness. They must have the ability to rear a calf on their own with no supplementation and be in the region of 700kgs.”

“Having Aubracs, I can sleep with ease at night during the calving season, knowing that I am not going to run into any major problems.”

Hanbidge listed ease of calving, milking ability, high fertility rates, docility, high longevity, and ease of maintenance as some of the breed’s characteristics.

He noted that females have a short gestation and excellent pelvic conformation, delivering small, hardy calves with ease. 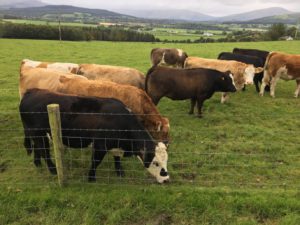 “The breed is sustainable and can be maintained on grass alone during the summer. Aubracs are efficient feed-to-weight converters.”

Males are slaughtered as steers between 22-24 months of age, at 350-400kgs carcass weights, with 50% grading Us and the rest grading Rs.

Alfie retains some heifers as replacements, while others are sold to new and existing breeds with all bulls sold for breeding purposes.

“Nine out of ten of my bulls are now going to dairy herds. There has been a major surge of interest in the breed from dairy farmers, particularly in recent years.”

“The breed’s ease of calving, short gestation and high calf sale price make them an attractive option for dairy farmers.”

Commercial heifers are retained as replacements and calve down as part of a 36-month-old calving system; the remaining heifers are sold to breeders. “The Aubrac-cross Simmental is a very popular breeding female selection.”

“With strong demand for five-star genotyped heifers, I sold seventeen 18-month-old Aubrac-cross-Simmentals in the mart in recent weeks, all of which were bought for the BDGP.”

“All my females have four and five-star replacement ratings, that is why I was able to sell surplus females. I have twice as many eligible females as I need for the scheme,” added the BEEP-S participant. 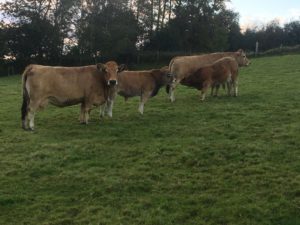 Looking ahead, the family will continue to have a prominent presence in the Aubrac circles, producing high-end cattle to meet market demands.

An esteemed Aubrac cattle ambassador, Alfie plays a pivotal role in the breed’s growing popularity on the island of Ireland.

The Wicklow native is involved at society-level, assisting with farm open days, agricultural shows and society shows and sales and previously held the position of ICBF representative.

He is confident that the breed will continue to gain momentum across various farming systems.

“My journey to date with Aubrac cattle has been a revolution, in so far as I have found a breed with all the traits needed for efficient and sustainable beef production ideally suited to the new PGI status for Irish grass-fed beef.”

“I can see a great future for the Aubrac breed on many other fronts also, including dairying. Dairy-bred Aubrac calf numbers have doubled in one year alone. As many Aubrac breeders are involved in organics, there is potential to explore this area further.”

“With my son, Douglas, an agricultural contractor, coming on board, we look forward to the future that lies ahead,” Alfie concluded.

The Irish Aubrac Cattle Society will host its pre-selected sale on Saturday, October 24th with 38 females and 14 males on offer.

Animals to be penned by 10am, with sale to commence at 1pm. Online bidding facility available. For more information, click here.