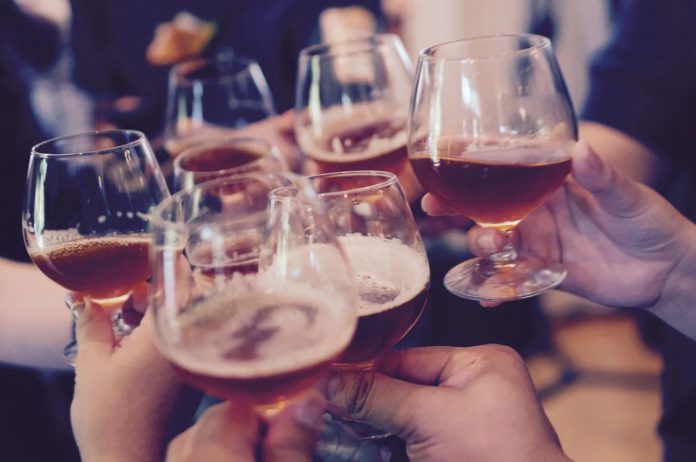 While alcohol consumption levels in Ireland have “plateaued” since 2013, people’s consumption remains significantly higher than the government’s 2020 target of no more than 9.1 litres of pure alcohol per person a year.

That is according to a new report from the Health Research Board (HRB), which presents an overview of alcohol consumption and harm in Ireland.

Given that one in four people in Ireland do not drink at all, actual consumption rates among those who do drink “would be much higher than this”.

Ireland ranks 9th among OECD countries in terms of alcohol consumption and 8th in the world when it comes to monthly binge drinking, defined as consuming more than six standard drinks in one sitting.

More than half are hazardous drinkers

Dr Deirdre Mongan, research officer at the HRB and co-author of the report:

“While we have not seen a rise in consumption in recent years, the amount we drink and, in particular, how we drink continues to put us at risk of serious harm.”

“Binge drinking is still widespread, especially among young people. Almost one in four men and one in ten women report that over the past year, they have drunk more in a single sitting than would be suggested as a maximum weekly limit by low-risk guidelines.”

“However, it appears many of us are unaware that our habits may be harmful. More than half of Irish drinkers are classified as hazardous drinkers, yet 74% consider themselves to be a light or moderate drinker.”

The report provides several insights into how consumption patterns vary between age groups and genders.

Older adults aged 65 and over tend to drink less; however, of those who do drink, one-third are hazardous drinkers, with over 40% of men over 65 engaging in monthly binge drinking.

Three in five drinkers over 60 years, who take medication that interacts with alcohol, have reported that they continue to drink while on such medication.

The report’s findings underline the significant harm that alcohol continues to have on the health of people living in Ireland.

Over 70% of those who died of alcohol-related causes were under 65-years-old, highlighting the high levels of premature mortality associated with alcohol.

The report states that over 82% of schoolchildren have consumed their first alcoholic drink by age 17, with the proportion of children reporting to have been ‘really drunk’ on at least one occasion ranging from 5% of 13-year-olds to 62% of 17-year-olds.

Parents were the most common source of alcohol. 35% of 16-year-olds reported getting alcohol from their parents; 19% at a pub, bar or club; and 14% at supermarket, shop or off-license.