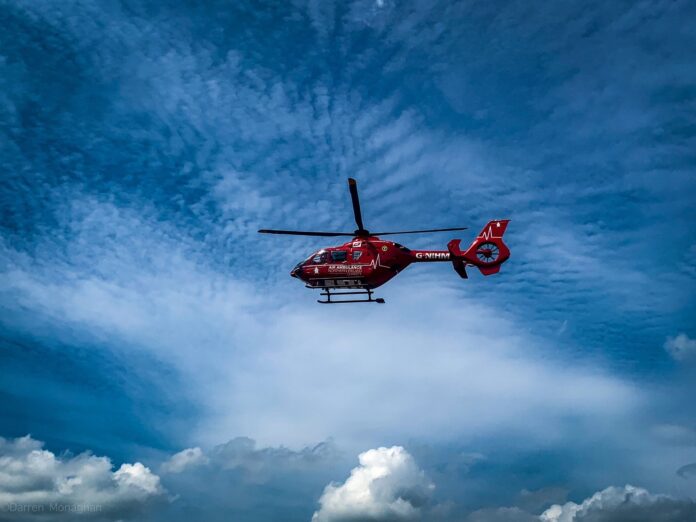 ‘An average week would include at least 1 farm accident’

Air Ambulance Week 2022 is taking off across the UK from September 5th-11th to raise awareness of the life-saving work of air ambulance charities, including Air Ambulance Northern Ireland.

This year, the charity is highlighting what a typical week looks like for the Helicopter Emergency Medical Service (HEMS), which is provided in full partnership with the Northern Ireland Ambulance Service.

In its five years of operation, the HEMS have been tasked on 3093 occasions and 414 this year alone (to the end July).

They make, on average, 14 missions each week to critically ill or injured patients with its air ambulance team, a consultant doctor and an experienced paramedic.

Air ambulance crews bring the skills and expertise of a hospital to the scene of an emergency, performing complex procedures using advanced equipment and drugs that improve survival rates.

The HEMS has been required on 414 occasions this year alone (to the end July).

Each mission requires fundraising of around £2,750, they explained, so with 14 call-outs per week, public support is “crucial”.

The range of incidents varies from day to day, as operational lead for the HEMS, Glenn O’Rorke, explains:

“We make around 14 missions a week, forming an important part of the emergency services right across NI.”

“Each patient and situation we go to is unique. The patients we care for are at the centre of everything we do.”

“An average week would include at least 3 serious road traffic collisions, 3 medical emergencies, 3 falls, 1 farm accident, 1 industrial accident, 1 serious sport-related accident, 1 assault and 1 other accident, which could be deliberate self-harm, serious burns or drowning, to name a few. “

“We feel privileged to help at the scene of an incident, giving patients critical care, that may make a life-saving difference.”

Air Ambulance NI is calling on people all over NI to play their part by ‘becoming a member this September’ of ‘Club AANI’.

Kerry Anderson from the charity added:

By becoming a member this September, you will join a club of almost 1,500 members, all from various walks of life and backgrounds but all of whom are passionate about sustaining air ambulance. “

“Most members establish a monthly direct debit starting at just £8. It is not a lot of money but it is crucial to saving lives. Already, our members fund over two days of missions each month, which is wonderful. “

“We try our best to look after our members by inviting everyone to an annual BBQ to see the helicopter and share updates through a monthly e-zine. “

Members can show their support publicly with a car sticker, pin badge and branded notebook.

It also has a membership programme for children and young people called Junior Club.