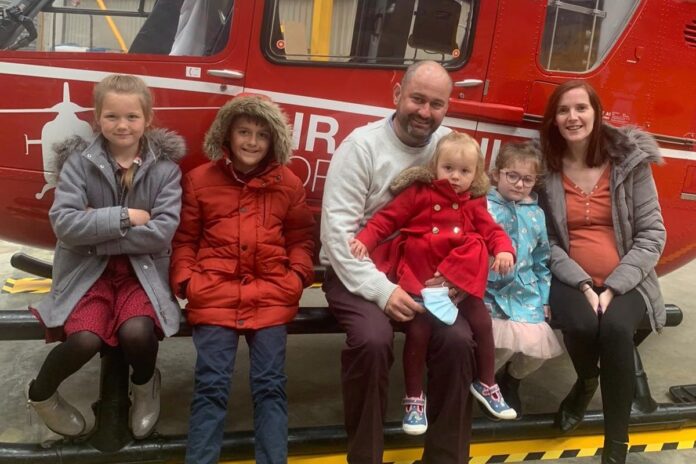 On Wednesday, April 1st, 2020, William Graham was involved in a life-threatening accident when he was crushed by a dump truck at his home in Annalong, Co. Down.

The 40-year-old had been doing some maintenance around his home.

A fault with the dumper led him under the machine resulting in the accident. He suffered extensive abdominal injuries, including a ruptured intestine and traumatic pancreatitis.

William was trapped under the dumper for an extended period. The machine pinned him to the ground, and he lost consciousness.

The dumper drove over William but somehow he regained consciousness. His children, Joshua and Chloe, heard his calls for help and raised the alarm.

His wife, Emma, found him in a distressed state and immediately called 999. The air ambulance was tasked to the scene.

“I could feel myself fading and had said goodbye to Emma believing I wasn’t going to make it. My last memory after that is hearing the helicopter and help arrive”.

William had significant, life-threatening injuries and required the team to perform an induced coma.

A helicopter transported the father-of-four young children to the Royal Victoria Hospital (RVH). He stayed in intensive care for seven weeks. Due to the extent of his injuries, he was intubated for five weeks.

Furthermore, he spent five weeks in the surgical ward of the RVH.

It was a particularly difficult period in hospital as visitors were not allowed as per Covid-19 restrictions.

William commented: “One of the people who saved my life that day was my consultant. As I recovered, I got to see him regularly.”

“I eventually asked him what he thought of my condition when I first arrived. He said at the time he believed I only had a 5% chance of surviving and that without the intervention of the air ambulance, I most likely would not have survived.”

Now, almost two years on, William is back to work as an estate agent and welcomed his fifth child, a daughter, in July 2021.

He is still on the road to recovery with ongoing hospital visits. However, he is back driving, working, and looking after his young son, Joshua and four young daughters, Chloe, Sophie, Hannah and new addition to the family, Grace.

William added: “I owe my life to the service of the Air Ambulance NI and the staff at the RVH and will be eternally grateful.”

“Public donations fund much of what they do, which undoubtedly has saved countless lives. It really is a most worthy of causes.”

It claims that it can “get to anywhere” in Northern Ireland in approximately twenty-five minutes.

The HEMS team tends to seriously ill or injured patients, bringing emergency pre-hospital care direct to the casualty to save lives, brains and limbs.

“Patients are at the centre of everything we do. We cherish being able to meet patients and their families when they choose to get in touch.”

“It is incredible to see William recovering so well. William experienced such a freak accident, that no one could have predicted.”

“When an incident like this occurs, every minute matters. The extent of William’s injuries were severe. His survival depended on getting him the critical care he needed quickly.”

“Thankfully, his family acted fast and called the emergency services immediately. If they hadn’t, William’s outcome could have been very different,” he concluded.