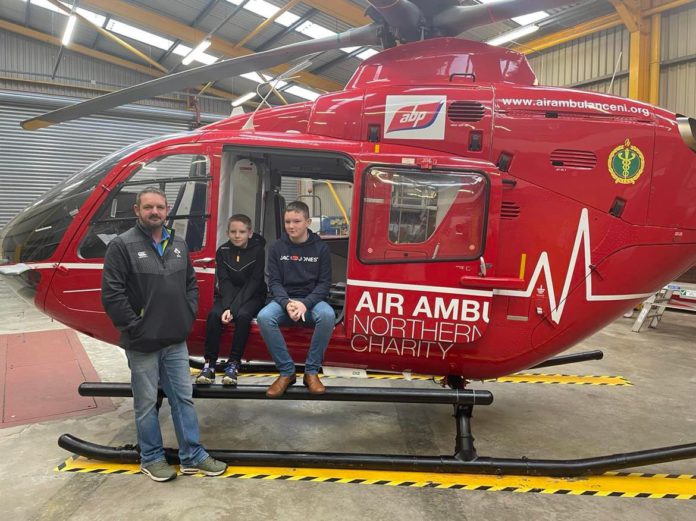 On Sunday, September 26th, 2021, Johnny Wigham, a self-employed lorry driver from Fivemiletown, Co Tyrone, was working on his family farm.

He was driving a Manitou around midday when the vehicle toppled over in the yard. This caused his body to hurtle around the inside of the forklift.

His sister and her husband saw the incident occurring from their house across the field.

They ran over to assist him while his wife, Donna, phoned the emergency services. Johnny managed to free himself from the vehicle, but he was badly hurt.

The air ambulance landed beside the farm, and the HEMS consultant doctor and paramedic began working with their NIAS colleagues to treat Johnny at the scene.

When Johnny was stable, they transported him to Royal Victoria Hospital, Belfast in around 20 minutes.

He was suffering from four broken bones in his lumbar spine but has made a strong recovery.

Just six weeks after his accident, Johnny, Donna and their two sons visited the Air Ambulance NI base. There, they met members of the charity and HEMS team.

Johnny’s wife Donna said, “All of the emergency services who attended were fantastic.”

“The air desk paramedic spoke to me on the phone with such ease and compassion. From the moment the Air Ambulance landed, the care provided was second to none.”

“The doctor and paramedic immediately went about their job and calmed the whole situation down.”

“They knew instantly upon examination that something was not right and swiftly decided that airlifting Johnny to Royal Victoria Hospital was the best option.”

“It’s a service that none of us wishes to require, but when it is needed, it is undoubtedly the quickest and most efficient.”

“Without the intervention of the Air Ambulance NI team, the road to recovery would be an even more long-winded one than we are on.”

“However, due to the immense knowledge and professionalism, Jonny is well on the road to recovery.”

After witnessing the care provided to Johnny at the scene that day, Donna signed up to become a Club AANI member.

The unique membership allows supporters to donate a small amount to the charity each month to keep the helicopter flying to people like Johnny when they need emergency pre-hospital care.

“Patients are at the centre of everything we do. It is always a pleasure to welcome those who contact us to the base.”

“It was fantastic to meet Johnny and his family and wonderful to see him recovering well so soon after his incident.”

“We’re also delighted that Donna has joined Club AANI. It is one of the simplest ways to support our charity and helps us predict regular income.”

It has approximately 1500 members who receive a car sticker and gold pin badge.

Furthermoer, it keeps in touch with members through a monthly email and annual summer get together.

“Most members donate monthly, and some prefer an annual subscription,” he added.

“However, our members choose to donate; they all help the medical crew to save lives, brains and limbs,” he concluded.

It can get anywhere in Northern Ireland in approximately twenty-five minutes.

The charity cherishes connecting with former patients and patient families.

If you, or one of your family members, have been treated by the HEMS crew, please contact Air Ambulance NI by calling 028 9262 2677.

Air Ambulance NI aspires to raise £2million each year to sustain and develop this service, and public support is “crucial”.