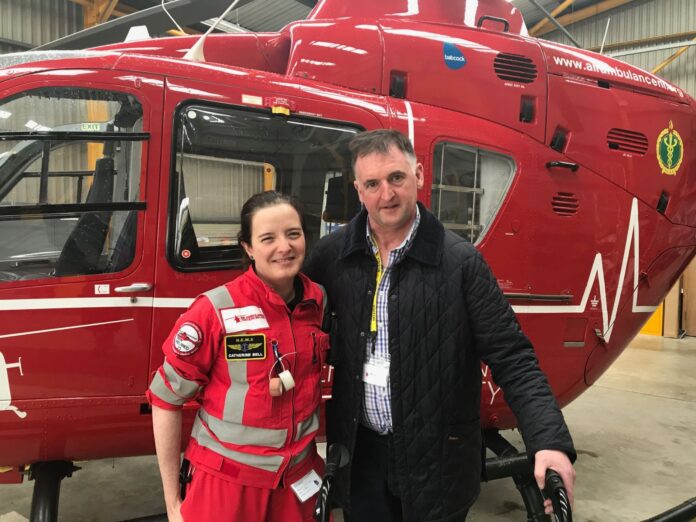 The Claudy, Co. Derry native was overcome by fumes while attempting to rescue lambs from a shed after mixing slurry on the family farm.

Emergency services, including Air Ambulance NI, responded and provided pre-hospital critical care interventions at the scene that a patient would normally receive in a hospital setting.

The sheep farmer had a four-month stint at Altnagelvin Hospital. He undertook five months of rehabilitation in the Musgrave Brain Injury unit and had to learn how to walk and talk again.

“It has been a difficult journey, but I am blessed to be alive. And that is thanks to the Air Ambulance NI team and all the doctors and nurses who cared for me.”

“If it was not for them, I would not be here today,” he concluded.

‘An average week would include at least 1 farm accident’

Air Ambulance Week 2022 is taking off across the UK from September 5th-11th to raise awareness of the life-saving work of air ambulance charities, including Air Ambulance Northern Ireland.

This year, the charity is highlighting what a typical week looks like for the Helicopter Emergency Medical Service (HEMS), which is provided in full partnership with the Northern Ireland Ambulance Service.

In its five years of operation, the HEMS have been tasked on 3,093 occasions and 414 this year alone.

They make, on average, 14 missions each week to critically ill or injured patients.

Air ambulance crews bring the skills and expertise of a hospital to the scene of an emergency.

The HEMS has been required on 414 occasions this year alone (to the end July).