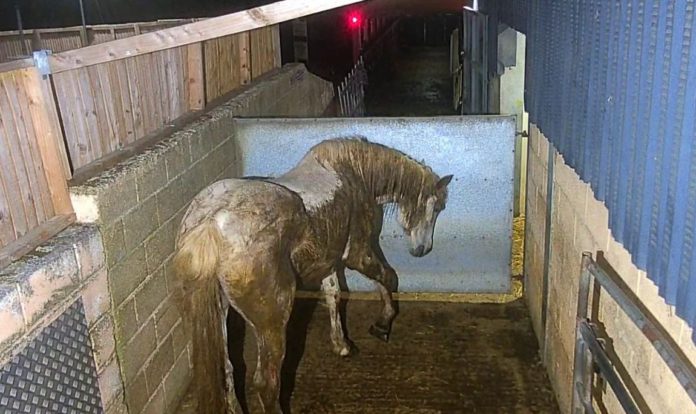 Two businesses, together with the director of both companies, have been found guilty of animal welfare offences.

The court heard than on October 22nd, 2018, L J Potter Ltd transported a horse from Northern Ireland along with a consignment of other horses to Drury’s abattoir.

The lorry arrived at the abattoir late at night and as the horses were being unloaded from the lorry, a grey mare was found to be lying on her side and unable to rise.

CCTV footage viewed by the court showed the horse attempting to stand 5 times, but continually falling over until eventually, she managed to stand unable to bear weight on her right foreleg and reluctant to move.

The court heard evidence from expert witnesses, who viewed the CCTV footage, that, in their opinion, at that stage, either a vet should have been called to assess the condition of the horse, or it should have been put down.

The vehicle departed but soon returned to the abattoir as the horse had somehow managed to stand during the journey. The horse was unloaded from the vehicle and CCTV footage showed her being unable to walk on her front leg. Experts giving evidence for the prosecution were clear that the horse was suffering, needed urgent veterinary attention and was not fit to be transported.

The mare was left alone in the lairage at the abattoir overnight until she was noticed by the vet on duty at the abattoir early in the morning. He took the view that the animal was in a severe condition, breathing rapidly, distressed and therefore needed immediate destruction.

District Judge, Tim Pattinson, said that Mr Potter “had made an error of judgement that had resulted in a horse suffering for several hours which could, and should have been avoided”.

“In this country, we expect high standards of animal welfare especially in commercial activity.”

Judge Pattinson also said that Mr Potter had shown an excessively relaxed approach to the problem and had underplayed the pain and suffering of the horse.

The case, brought by Wiltshire Council Trading Standards, resulted in a total penalty of £22,170 divided between the two companies and Stephen Potter and included costs of £10,000 awarded to Wiltshire Council.