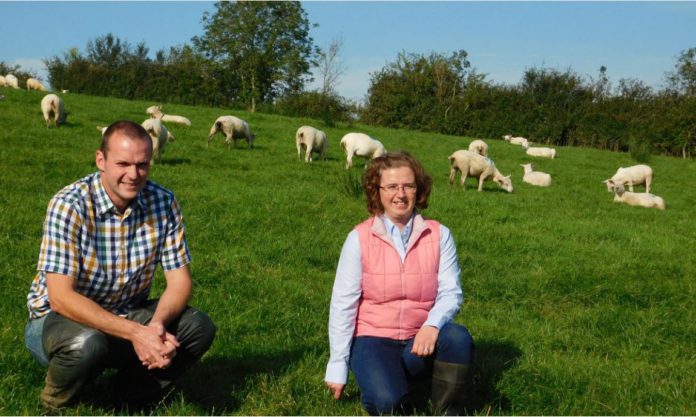 Careful consideration on the selection of replacement ewe lambs is something vital to the future performance of the flock. And, it is something that County Fermanagh-based sheep farmer, Geoffrey Read, pays great attention to.

Ruth Moore, beef and sheep adviser at the College of Agriculture, Food and Rural Enterprise (CAFRE) said: “The current flock of 180 ewes and 100 ewe lambs are managed to reflect the time Geoffrey can spend on his farm near Maguiresbridge.”

“Bearing in mind family and work commitments, he collects detailed records on flock performance to aid his management decisions and ensure labour and enterprise efficiency.

“Geoffrey invested in a flock management programme several years ago that links to his weighbridge.”

All lamb weights are now captured and linked back to individual ewes and rams. Using a combination of hard data from actual flock performance and physical appearance ensures he chooses the correct replacements for his flock.

Geoffrey Read said: “I like a ewe lamb from twins to be achieving at least 330g per day and 400g per day for singles. This will give a good indication of their performance from the ewe.”

Geoffrey added: “For this year, the ewe lambs are ranked for average daily liveweight gain between 8-20 weeks old and I selected the top 50% performing twins and the top 25% performing singles.”

CAFRE’s Ruth Moore continued: “Geoffrey also ensures that ewe lambs are at least 60 per cent of mature ewe weight at tupping, at the correct body condition score and that lambs are physically correct to achieve a target scanning percentage of 1.2per cent.”

Geoffrey also says that in the future he may consider selling surplus ewe lambs. “With data to back up their performance, I have confidence in their potential’.”

“Flock performance is driven by genetics. The use of performance recorded rams from a forage-based system will ensure I can maintain 1.8 lambs weaned per ewe whilst driving lamb performance from grass. These rams tend to be hardier and have fewer problems with fertility, legs and feet,” Geoffrey said.

All lambs are sold direct for slaughter and he is pleased with the performance of his lambs on a forage only system.

Speaking about the performance recorded data Geoffrey continued: “Lambs have performed very well this year averaging a liveweight gain from birth of 340g per day for those slaughtered to the end of August.

“Lamb growth has slowed now in September to 200g per day for ewe lambs and 230g for rams, but with plenty of grass available these will stay on-farm until they reach slaughter weights.”

Moore concluded: “As a sheep BDG member Geoffrey has availed of a farm innovation visit to study innovative approaches to breeding sheep for profitable systems.”

“Future plans include improving genetics to increase the kg of lamb produced per ewe on forage and he continues to research and implement appropriate technologies to push efficiencies and drive profitability.” she concluded

- Advertisement -
Previous article
‘If a bull shows any signs of aggression, cull at the earliest opportunity’
Next article
Abattoir found guilty of animal welfare offences