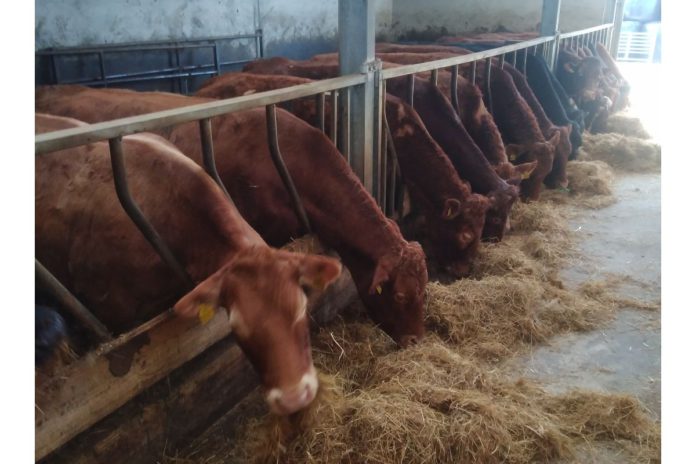 David Mitchell runs a herd of 35 suckler cows on 80-acres, in partnership with his father, in Killimor, Co. Galway. They also have a dairy-calf-to-beef system on the farm.

David was the FBD Young Beef Farmer of the Year for 2015, after getting involved through his local Macra club in Aughrim.

David has been farming at home for over 5 years, after graduating from Gurteen College with a level 6 in dairy and beef management. Since then, he has been building up the herd and plans to expand to a maximum of 44 cows.

“We used to only carry around 20 or 25 cows up until a few years ago. We were keeping weanlings and selling them as stores. Then we said there was more money out of selling cattle as weanlings than as stores.”

“Keeping them for the winter, the figures just weren’t adding up when you’re buying extra meal and cutting extra silage. We decided that we’d calve earlier and sell our weanlings in October.”

The Galway farmers keep mainly Limousin cattle; they run a Limousin stock bull and use AI on maiden heifers.

“We used to have Charolais as well, but the calves weren’t as hardy. We buy top-quality Limousin bulls and our cattle are doing just as well as a Charolais will do. We had bulls last year doing between 1.6 and 2kg/day.”

The Mitchells implement a 16-week breeding season on their farm, starting in the middle of March and ending at the end of June.

“I know 16-weeks is quite long, a lot of lads would be aiming for 12 but we find that there might be a few cows that’ll come into heat late. It actually works out as a bonus in the end because you might have a few weanlings to sell after Christmas that will pay a few bills.”

David operates a 24-month calving system on his farm and does not believe in feeding an unproductive animal. “Any cow that’s not performing is gone out the gate. There are no second chances and there’s no point feeding a cow that’s not making you money.”

“We sell them at the end of September, October and November. They’re all sold privately. The bulls are sold locally to Richard Bourns from Lisbeg Farms and the heifers are sold privately to a local farmer that finishes heifers.”

“We’re getting paid per kilo from Lisbeg farms. Cattle are weighed in there and you’re paid going out the gate so there’s no hassle with it really.”

“Since we started selling to Lisbeg Farms, we’ve built up a good relationship and they know the stock. We find that we get a few cent/kg more because they know they’re getting good, healthy stock.”

Calves are sourced by a livestock dealer both locally and in marts in the south of the country. “The dairy-calf-to-beef system brings in another income as well. At different times of the year when you have bills to pay, you’ll be able to sell at different times.”

“We were thinking if just going fully suckling and forgetting about the calf to beef but if we have a bad year with the sucklers at least we have the calf to beef to fall back on. You need to have two things going on really. When you’re relying on one, it’s a big gamble.”

He also works for up to five local farmers through farm relief and believes that an off-farm income is vital.

“I couldn’t survive purely off suckling. The money is just not in it you have to have an off-farm job. You’d want to have an awful lot of cows and even at that costs for everything seems to be going up all the time.”

“Our winter doesn’t be that long. We usually put in the cows around the middle of December and they’re out again by Paddy’s Day. We usually bring in the cows, wean them and then the cows will go back out again. The longer we can keep them out the better.”

“The farm is all in paddocks and I’d be fairly handy at managing grass from working with dairy farmers. If a paddock gets too strong, it’ll be mowed and taken out for silage. Letting cows and calves into strong grass, you’re not getting the benefit out of it.”

“They’re on strip wire all-year-round. We find that when they’re getting grass every 12 hours that the cows have milk all the time rather than letting them off for two weeks at a time where they’ll eat for a week and then go hungry for a week. With this system, they’re at a constant thrive and have no setbacks along the way.”

“Anyone that’s going to stay in suckling is going to have to watch their figures and have a plan for the future. It’s just as easy to have a good herd of cows as it is a bad herd.”

“It’s a life enjoy. Some people think it’s hardship, but I don’t think it is. There are ups and downs, especially last year we lost a bit of money. I was wondering if I was wasting my time but then you see other lads getting €300/head less than you and you think ‘I must be doing something right’. That drives you on makes you think you can stay in this game.”

“I think there is a future there and you have to be on the ball with what you’re doing. Anyone that’s suckler farming, should stay at it if they can.”