That's FarmingThat\'s Farming Irelands Largest Farming News, Properties and Classifieds Network
HomeBeef‘I do not understand how civil servants can be so hard on...

In 1984, Denis Twomey, from County Kerry, established the 30-cow Tubridmore herd when he acquired four breeding females from the Close herd.

“I supplied bulls to the dairy herd for several years and kept females to expand the herd until such a time I reached a 50-cow herd,” Denis Twomey told That’s Farming.

“This corresponded with dairy farmers calving down heifers at two years of age, which meant there was a demand for easy calving genetics.”

In the 1990s, Denis joined the Irish Aberdeen Angus Association when he noticed excellent breeding developments in North America.

“In the early 1990s, in the first year, we bought 12 embryos. They were by Sav Network, TP Scotsman, Sitz Alliance, Lady Blossom, Dmm Miss Essence, Black Cak May, and Young Dale Elba. They were the cream of the crop at the time.”

“We got ten pregnancies and eight heifers; that is very unusual; it has never happened since. We retained eight heifers in the herd for breeding.”

The cow families which are at the backbone of the Tubridmore herd include Lady Blossom, Rose Ericka, Frisky, and Fulham.

Denis outlined why he selected the breed and traits he seeks in his Aberdeen Angus breeding females.

“I had some Simmental cows and crossbred cattle. I found I had too many problems calving, I could not always be present, so I went for a smaller genetic animal.”

“I found when I bought the Angus breed they calved away as if you did not know they were calving,” the owner of the Tubridmore Angus herd explained.

“I have stayed with a pretty easy calving genetic pool to this day. I am not gone on these huge, big Angus, you see in Scotland.”

“The one thing I would insist and that is important with any bull or embryo I use is that they would come out easy.”

“I would like to breed a bull that comes out easy, fleshes naturally and delivers an R grade carcass when crossed with the dairy herd.”

“My ideal cow is an animal not too big or too small, a medium-sized cow, fleshing naturally, and calving without assistance.”

“The Angus are in a very strong position. They are the leading beef breed in the dairy herd. But, we have to be careful. We should watch out for the dairy farmer. They are inclined to sell the calf at three-weeks-old.”

Denis flushes one cow annually and retains females if he must keep a breeding line or genetics.

The farm implements a strategy of 100% AI with a stock bull, used Tubridmore Rain Maker, by Tres Marias Patron, for cows that repeat.

For eight years, the herd also used a home-bred bull, Tubridmore Gizmore, who is standing in Munster AI. 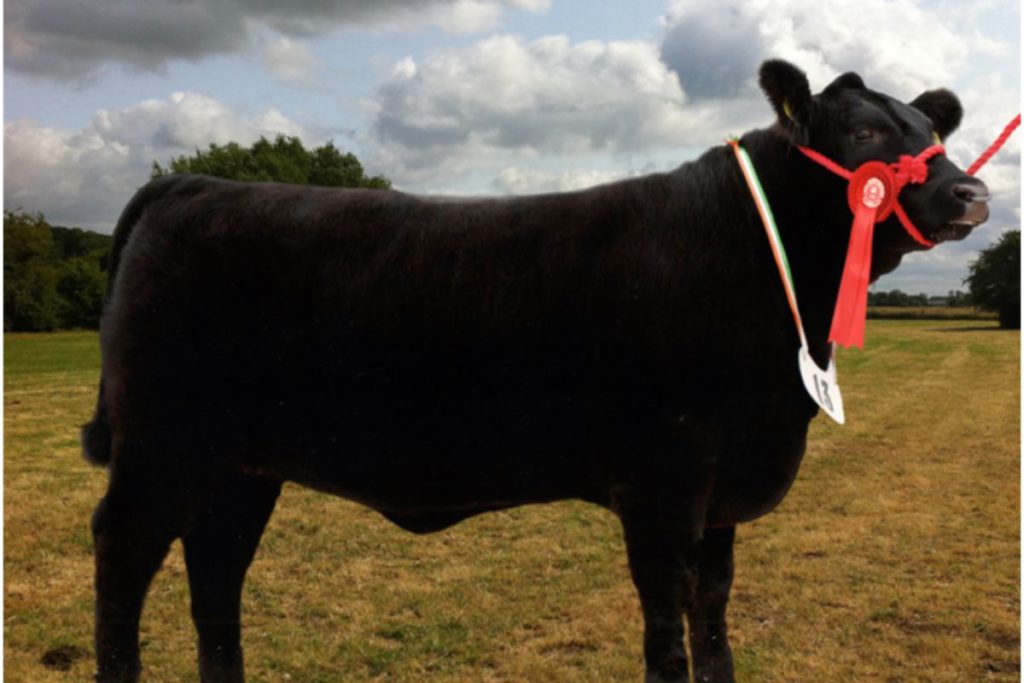 Denis calves most of the herd in autumn forming part of a spring-calving system.

“The reason for autumn calving is as herds get bigger, you want to have a bull in the springtime one year-and-a-half or seventeen-months-old.”

“The April-born calf is barely 12 months, and the calf is not good enough to go in with 40 heifers. If they were born in September or October, they would be a lot stronger.”

“It is more expensive to calve them in the fall as you have to give the calf a certain amount of ration during the winter. But, particularly Angus breeders have to do it because of the size of the animal.”

Denis sends calves to exporters that do not meet his breeding standards. “Anything we would not breed ourselves; we would not sell to a customer.”

Denis has been selling progeny from his farm for over 30 years. In addition, he keeps cows and their followers until between one-year-and-a-half and two-years-old.

“The vast majority of bulls would go to dairy farmers. I have not advertised a bull for the last 30 years because the same customers come back year in, year out. They must be happy.”

“There was a massive on-farm trade this year. I sold more at the house this year, and I even sold bulls I intended taking to society sales.”

“I think what happened was people were afraid of the Covid-19 pandemic and they did not want to go out to sales. I was at a sale in a mart at the time, and those who had bulls were only let in six at a time.”

“You got no chance to meet buyers as you would at home. But, on the other hand, many buyers like to talk to you before the sale.”

“We have three lovely embryo-bulls at the moment. One is by Sitz Upward, Bellvin Rebel, and Boss Hogg. All three bulls are doing between 1.6 and 1.7kg on average per day and 1kg and-a-half of feed ration.”

In the 1990s, Denis entered the show circuit when work and family duties allowed.

The Kerry native retired from a 33-year-long career as a maths and English teacher at Castleisland Community College.

Some of these shows are Bandon, Macroom, Kilmallock, Tralee, Cappamore, Strokestown, Charleville, the Tullamore Show, and Carrick-on-Shannon.

His successes include the 2018 ALDI All-Ireland junior bull champion, with Tubridmore Re Rebel 653, at Iverk Show in County Kilkenny.

“I always say showing is like playing golf. You got out today, you burn up the course, you think you have mastered the game until the next day you go out, and it takes you 140 shots to get around the course. That is a lesson in humility.”

“It is similar at shows. You can go out today/next week and win championships all over the place. Then, another week, you do not even make the rosettes with the same animals; that is the joy of it.”

“Every judge sees things differently, and that means everybody has a chance. As a result, you meet many people and make plenty of friends.”

“I know there is plenty of hard work involved in it, but it is enjoyable at the same time.”

The owner of the Tubridmore Angus herd outlined what it takes to succeed as a pedigree cattle breeder.

“It takes a lot of dedication, research, and effort to become a successful pedigree breeder. However, you do not become anything doing nothing.”

“You only become a successful breeder if you put in the hard work, and that is true of anything in life.”

“My advice to any young person getting into pedigree breeding is to, first of all, find out where their market is, e.g. dairy farmers, show circuit, or suckler farmers, etc.”

“There are new opportunities on the horizon with many dairy farmers trying to keep higher genetics/higher calving difficulty bulls to mop up cows, leaving the easier calving genetics for the heifers.”

Denis intends to keep farming for as long as he can and improve his herd’s genetics by using top sires.

He will complete this action using the best proven AI bulls and sourcing embryos annually.

The Kerry farmer shared his thoughts on Irish suckler farming.

“I do not understand how civil servants can be so hard on suckler farmers. They are giving them no chance whatsoever.”

“If it goes like this for every scheme [suckler scheme] you go into it, you are going to end up with nothing.”

“You cannot have more cattle than you had last year and the year before. It is happening to no other sector. It is not happening to the pig, poultry, or dairy sector.”

“If we were civil servants, the first thing we would do would be to go out and go on strike.”

“I am pessimistic about the future of the suckler herd because of the way we are being treated by the powers that be,” the suckler farmer concluded.