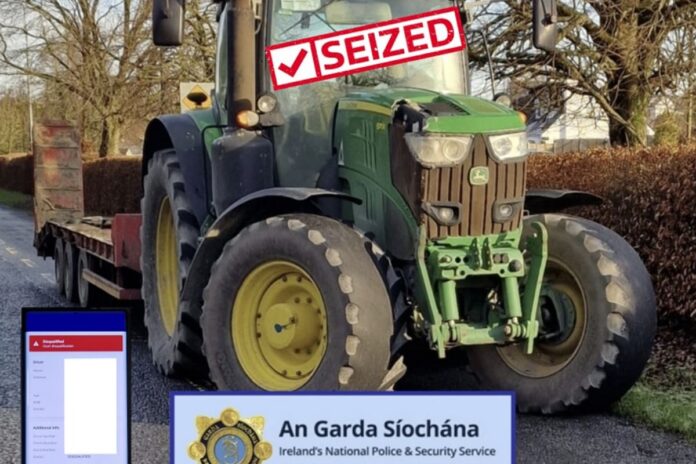 Gardaí in Co Laois have arrested a disqualified driver and seized a tractor following the detection of multiple road traffic-related offences.

Gardaí attached to Laois Road Policing Unit were on patrol near the Castletown area when they brought the driver to a halt.

The “poor” condition of the agricultural vehicle’s tyres was just the tip of the iceberg, as Gardaí later discovered that the motorist is currently disqualified from driving.

According to the RSA (Road Safety Authority), there are two ways you can be disqualified from driving. Either:

If you get 12 penalty points in any 3-year period, you are automatically disqualified from driving for six months.

According to the authority, penalty points stay on your licence record for three years. Penalty points are recorded on your driving licence.

According to CitizensInformation.ie, if you drive while disqualified from driving, or you are required to produce a certificate of competency or certificate of fitness before getting a driving licence.

If you drive while uninsured, you could be fined up to €5,000 and get 5 penalty points. Also, you could go to prison for up to 6 months.

According to the RSA, all your tyres must:

The law states that it is a driver’s responsibility to ensure their vehicles meet the legal requirements and is in a roadworthy condition at all times.

The Road Traffic (Construction and Use of Vehicles) Regulations 2003 sets out requirements for tyre condition and tyre tread depth for vehicles for use on a public road.

In a statement, a spokesperson for the RSA (Road Safety Authority) said:

“If you drive with damaged or worn tyres, you are putting your own life and the life of others at risk. You also risk prosecution.”

“If you are convicted of the offence of driving with dangerous tyres, you could be fined up to €2,500, or receive a 3-month prison sentence, or both.”

“You will also have five penalty points on your licence on conviction,” the spokesperson concluded.