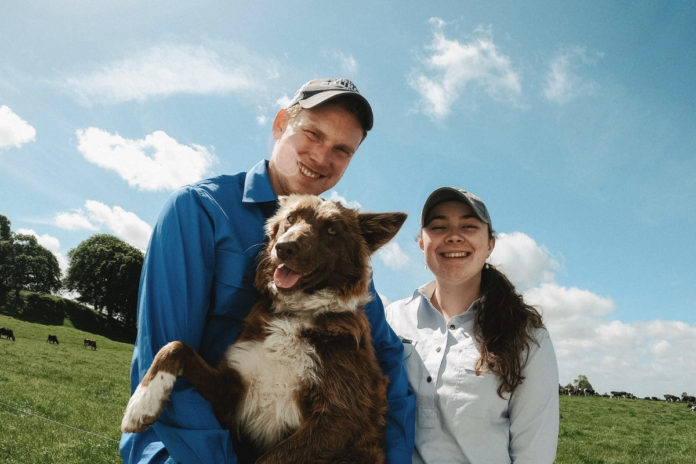 Taking ‘the scenic route’ into farming

Maria and Padraig Keane were married in the summer of 2018 and began their journey in farming together.

Maria is a West Limerick native, coming from what originally was a dairy farm that transitioned to drystock, while Padraig grew up on the farm in Kilcormac, Co. Offaly, on a drystock farm that converted to dairy.

The pair first met in 2015 at a festival in Roscrea and, as they say, the rest is history.

Maria spoke to That’s Farming and explained how her journey into farming came about.

“Farming wasn’t really in my mind as a career choice in any shape or form. I enjoyed it at home, but agriculture as a career didn’t really cross my mind at all.”

“In school, I loved business, maths and accounting but I was also a musician, so I went to the University of Limerick and studied Irish Music and Dance and Psychology. I had great intentions of being a music therapist because I love music, but I couldn’t see myself sitting in an office all day.”

Along came Padraig then to provide her with the solution. Maria explained that once she started farming again in Co. Offaly, it didn’t take long for her to realise that it was the career for her.

“I just fell in love with the work and the lifestyle. I was able to have the office work that I like with data and analysing but also be able to get out of the office when I wanted and go out into a field with animals. I came in a roundabout way into farming – taking the scenic route.”

At that time, Padraig was still in the middle of the conversion to dairy. After finishing his Ag Science degree in UCD and spending time milking cows in both New Zealand and Ireland, he decided to convert his suckler and tillage farm into a dairy enterprise in 2013.

Through a new entrants’ scheme, Padraig was granted a quota of 200,000 litres, which was enough for him to invest in 45 in-calf heifers. He installed a 6-unit temporary parlour into an existing slatted shed and began chasing the dream.

“Even though he was milking on his knees, you just knew he loved what he was doing, and you could tell how much he enjoyed it. Someone else might think that’s hardship and ask why would you put yourself through that, but he always had the bigger picture in mind.”

“When you can sense that from somebody, that they love what they do, it’s almost infectious and it’s probably the reason I fell in love with dairy farming as well,” Maria told That’s Farming.

After two years in dairy, a new 14-unit milking parlour was built, along with a new cubicle house, and the herd was increased from 45 to 65. In that same year, an opportunity came up to lease more land which would double their milking platform.

The expansion phase of the farm is now over, and both the farmers and the animals have settled into their rhythm.

“When you’re in expansion mode, you’re always thinking about what needs to happen next. It’s nice now to not have to think about that and just consolidate what we have.”

During that expansion period, the pair had gotten married and the Limerick-native joined the farm on a full-time basis.

“Before we got married, I would be up any time I was free. Padraig had given me a lot of responsibility up to that point, in terms of financials and things like that, but that’s when I made the transition to full-time.”

Working together as a married couple can be a different experience for different people. However, for this duo they wouldn’t want it any other way. The Limerick native explained how their individual strengths complement each other in their working environment.

“It’s so nice that we can share this because, if I had an off-farm job, I probably wouldn’t understand what’s going on at home. You might not fully be able to empathize with what’s going on. We are so fortunate that we get to do this together and we don’t take any day for granted.”

Although things are running smoothly now, the transition wasn’t so easy for Maria. A lack of confidence on the farm and in her decision making meant that it wasn’t always as simple as it seems.

“Particularly at the start, I would always question myself because I don’t have that educational background in ag science. I would have always second-guessed myself and wouldn’t be fully confident in the decisions I was making.

“I was running everything by Padraig because I wasn’t confident in myself, but he always believed in me.”

“I put aside the fact that I don’t have an ag science degree and looked at what I do have and what my strengths are. I had to flip my mindset and forget about what I couldn’t do and look at what I can do and what I can offer. It’s all about your perspective.”

With the system in full flow, Maria has been able to dedicate time to her creative side and take the farm to social media. Keane Farm Life can be found on YouTube, Instagram and Facebook as Maria provides an insight into their life on the farm.

“I suppose being a musician, I always had that creative outlet. Being on the farm, I love all the data and things like that, but at the same time I wanted a creative outlet.”

Looking forward to the future, Maria hopes that their life will continue along the same path as it has done over the last number of years.

“We want to just keep doing what we absolutely love to do. We just love farming so much and enjoy it so much together. I couldn’t see myself doing anything else.”

- Advertisement -
Previous article
‘Marts should be allowed to operate to a 1-metre social distance’
Next article
Weather: Will grass be knocked this week?