That's FarmingThat\'s Farming Irelands Largest Farming News, Properties and Classifieds Network
HomeEditor's PicksVIDEO: ‘A horse is like a dog; if they like you, they... 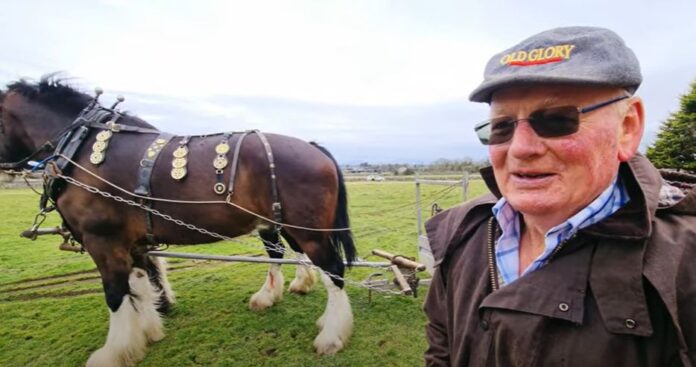 I had not been to a ploughing match before, writes Paddy Fanning of Churchmount SheepDogs.

I stopped to admire some of the tractors and their two-furrow ploughs when something out of the ordinary caught my attention.

Moreover, I looked around with great amusement to see an outfit that resembled a Roman in a chariot.

It turned out to be a Sligo man standing in a trailer being pulled into the field by a team of very fine Shire draft horses. I had to investigate this further. I found out that this Roman was Colman Cogan from Kilmovee in Co. Mayo.

Coleman Cogan is a grain and feed merchant based with three trucks on the road, serving farmers with feed products across a region of three counties.

After a brief time in England in the early 1970s, Colman returned to Ireland and became a farm contractor. This business evolved into a haulage business in the 1980s, and he had several lorries servicing routes between Ireland and the continent.

One of his main customers was the Hal-Al meat factory. Hal-Al went on to close its factory in Mayo in the 1990s, and after this, Coleman transitioned back into farm contracting.

His focus moved more towards blending cereals for cattle feed. When the sugar factory was going strong in Carlow, there were plenty of farmers in the southeast growing beet.

Coleman would buy beet and transport it west, where he would then wash and process it into beet pulp for farmers to use to fatten their cattle.

In the last ten years or so, Colman has found himself in a position where he has been able to follow his passion.

He told me that he has always had horses of some kind and that his father always kept two teams of horses and that he worked them commercially for most of his life.

Furthermore, he told me that he had never ploughed with horses until about seven years ago, but you would never know that now when you see how competent and comfortable he is with the horses and his plough.

Coleman is now a regular at ploughing matches, and he has even ploughed with celebrities. He has had the former Taoiseach, Leo Varadkar, working his horses and the plough on a couple of occasions.

You can find Colman on Facebook with his horses on their page, Kilmovee Shire Horses.

I found it very interesting and easy to listen to ploughman, Coleman. We captured some of it in an interview with him here, onsite at the ploughing in Roundfort.

Footage from the Mayo County Ploughing Championships at Roundfort on April 10th, 2022.