That's FarmingThat\'s Farming Irelands Largest Farming News, Properties and Classifieds Network
HomeBeef‘It costs the same to keep a good cow as it does... 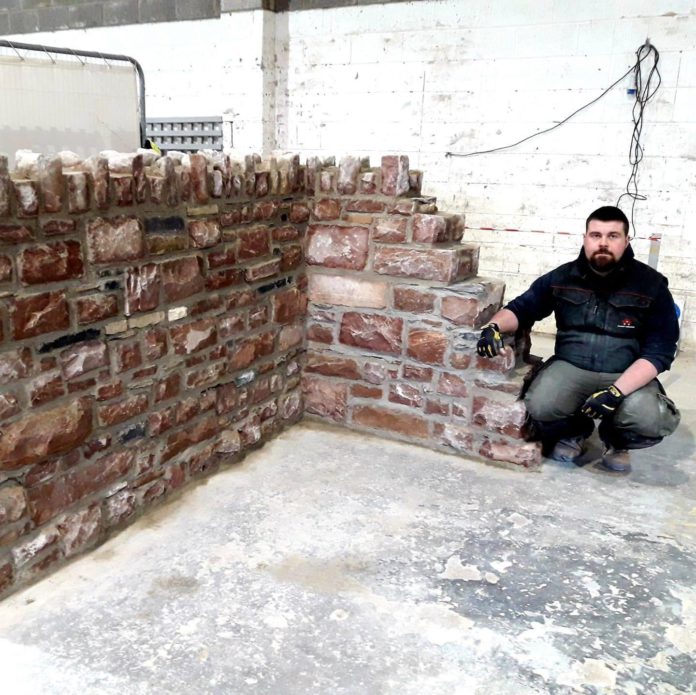 In this week’s Suckler Focus, That’s Farming, speaks to 28-year-old part-time farmer, Patrick O’Rourke. He discusses farming mountain and bogland, €1.50-€2.00/kg for weanlings off land and

“I think the key elements of a successful suckler herd are to have a small number of quality cows that will produce a quality calf at sale.”

“It costs the same to keep a good cow as it does to keep a bad cow and sometimes even less to have a good one. Have your small quality herd instead of a high quantity weaker herd.”

Those are the sentiments of 28-year-old part-time suckler farmer and stonemason, Patrick O’Rourke, who hails from the Slieve Aughty Mountains, Loughrea, Co. Galway.

Patrick manages his Blackton Shorthorn herd with the help of family and friends, including his father, Paddy, uncle, Laurence and girlfriend, Nicola. 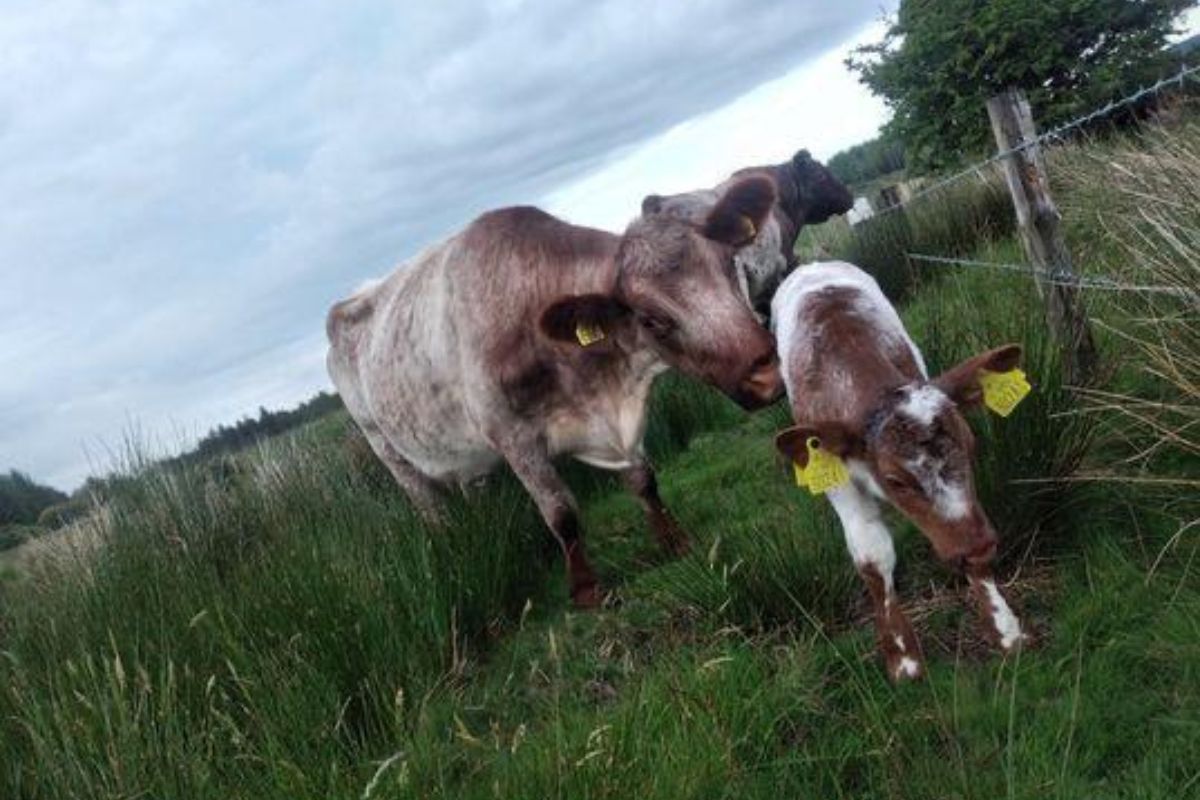 He told That’s Farming: “Farming has always been in my family and goes back hundreds of years.”

“I inherited the land in 2015 and started farming on my own when I was 22. In 2013, I completed my Green Cert at Gurteen Agricultural College straight after completing my Leaving Certificate.”

“I would highly recommend Gurteen to anyone who is looking into completing the Green Cert. They have a great setup and team there.”

He chose the Shorthorn breed because of its suitability to his land type, traditional style and docile nature.

“It is important to pick a breed which is suited to your land and not what breed your neighbour may have or what has the biggest sales in the mart.”

“Even though a big yellow Charolais bull weanling, for example, sells well at the mart, if your land cannot support him and he does not thrive, you will end up pumping extra feed at him, which is not cost-friendly.”

“My ideal cow would be a Shorthorn breed with a small high udder, small teeth suited for ease of calves suckling.”

“She must also have the typical Shorthorn trait of having very nutritious milk and is about 500 to 600kg in weight. They are more suited to travel the land and are more cost-efficient.” 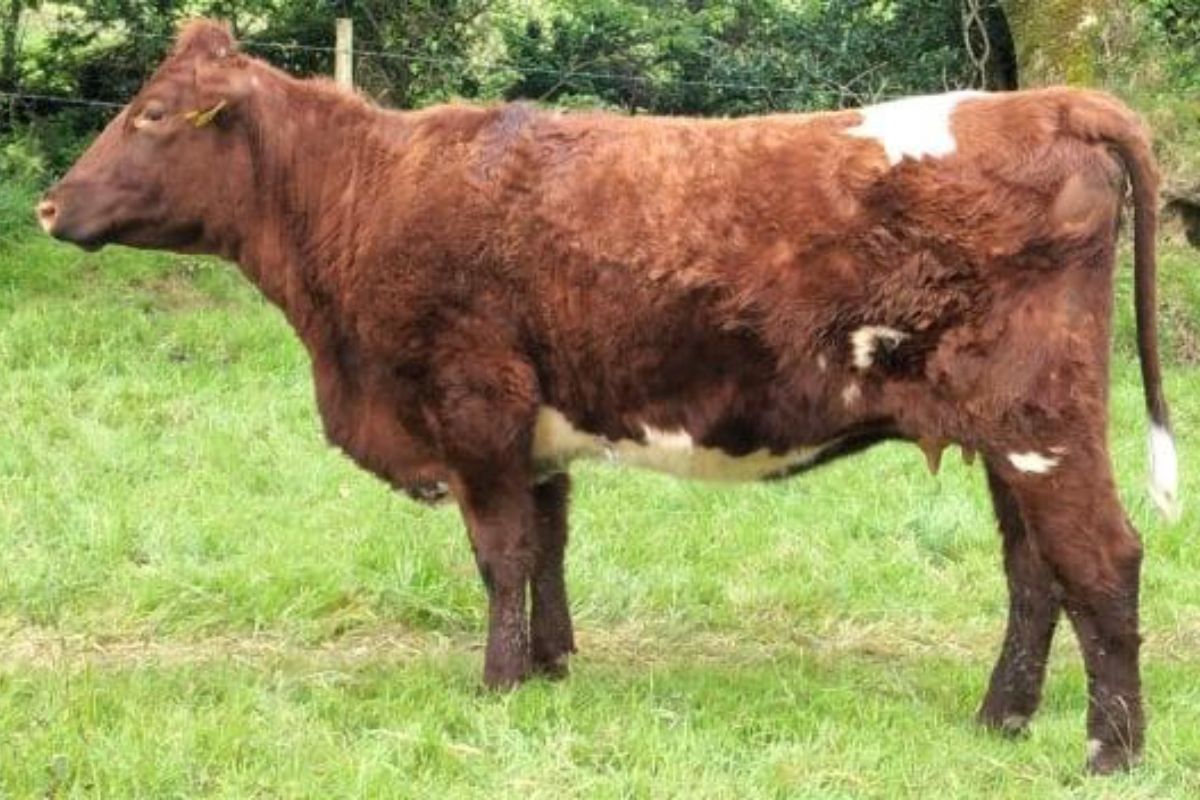 “I find the calves are a lot healthier, and illnesses such as scour and pneumonia do not seem to be an issue.”

His stock bull, Knockanedan Gambler (AKA Billy), is a 100% traditional Shorthorn from John Joe Conway’s herd in Kilfenora, Co. Clare.

“I am very happy with him all around. He has a very good temperament and brings nice small calves that are easy to calve but still thrive at two weeks of age,” the Irish Shorthorn Society member added. 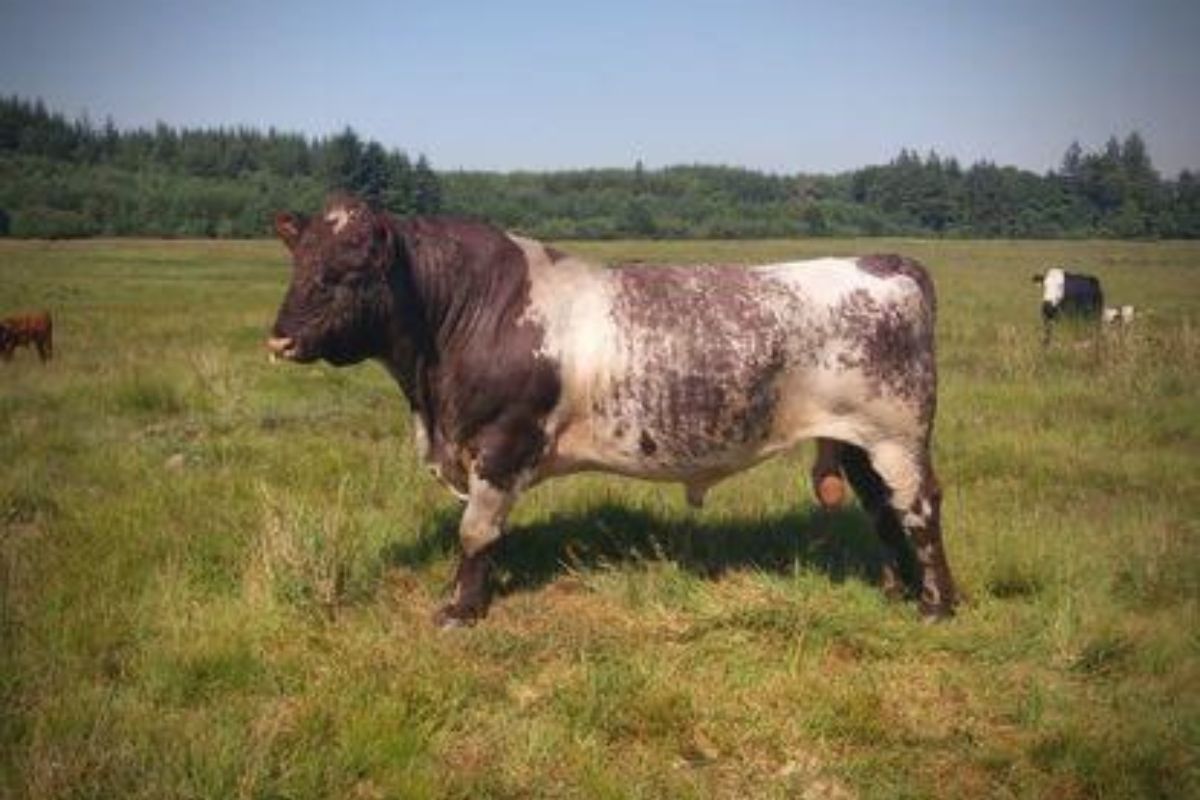 Patrick sells calves off land at approximately 200 – 350kg at 7-8-months old, fetching €1.50 – €2.00/kg. He feeds calves concentrates for four weeks pre-weaning and two weeks post-weaning as part of the BEEP-S.

“This is my first year for a purebred registered bull calf to be born on the farm. I am planning on rearing him and selling him as a bull, or I will keep him for this year’s heifers that I will keep on as replacements for 2023.”

“Culling of cows usually takes place when they hit the 13 – 15-year-old mark, depending on their condition. I send them to the factory and do not keep them for the winter months. Furthermore, I replace them with an in-calf heifer in the spring.”

“The performance goals of my herd are to have one calf per cow per year, and thankfully I have met these goals. Also, I aim to keep the cows weights up to where I want them.”

Mountain and boglands as grazing ground

Grassland management is very important on the farm as the mountain and bog lands only give one good grazing crop a year from June onwards. Furthermore, to comply with scheme regulations, the young farmer cannot spread any granulated fertiliser.

“After all the cattle have calved, I move them to rented land which is strip grazed until June when the mountain is ready for grazing, and I can put cows out with the stock bull.”

“After each area of the mountain has been grazed, it is then topped once in conjunction with schemes that I am in. I take cattle off the mountain in October and put them back onto rented land until December when they go inside for the winter.”

“It is very important not to overgraze the mountain but at the same time keep it clean, and that is why a small herd suits,” the part-time farmer added. 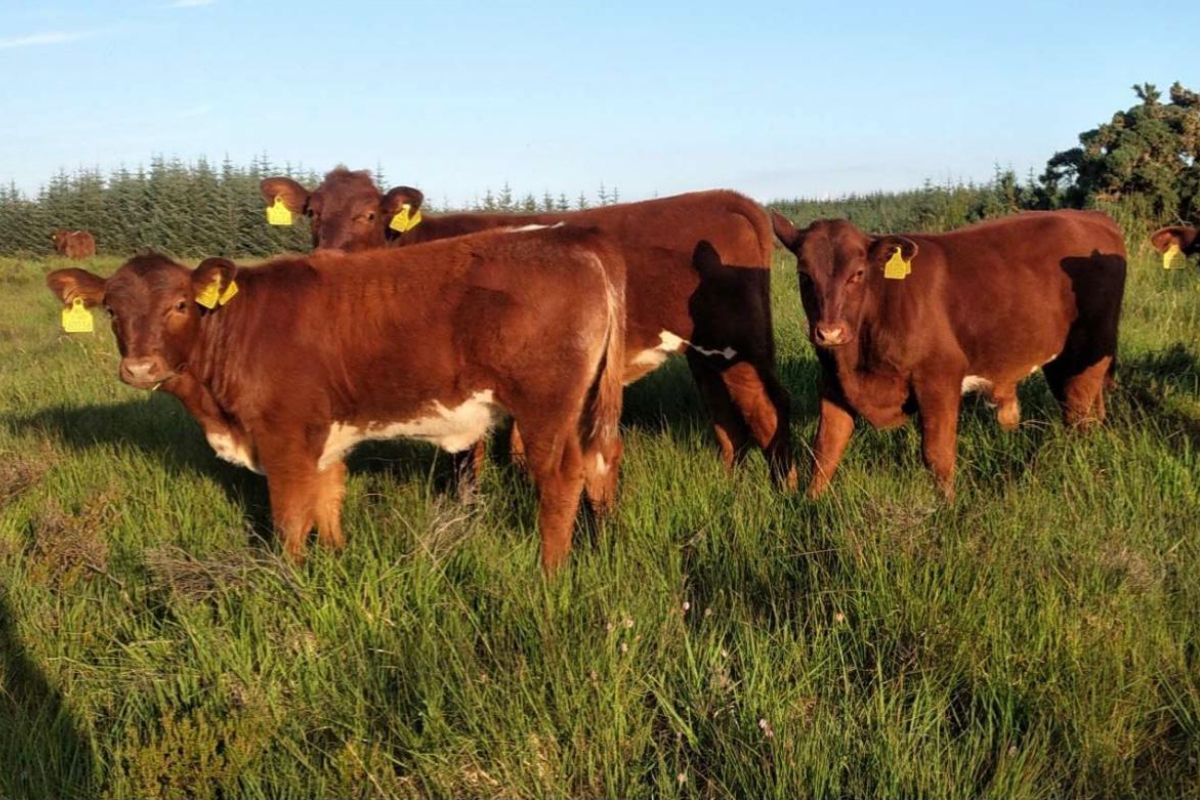 Focusing on pedigrees and the industry’s future

The 28-year-old shared his thoughts on the future of suckler farming in Ireland and his plans for his herd.

In the future, he intends to continue focusing on current performance targets, whilst increasing numbers to fifteen breeding females and one bull.

He plans to create a full pedigree Shorthorn herd, with a view to eventually phasing out commercials.

“As for the future of suckler farming, I see it as it will be the only mountain and bog farmers like myself that will continue it as young and big heavy cattle do not suit us for grazing.”

“I can see a lot more suckler farmers with good land and good facilities changing to beef and rearing dairy bred calves.”

“It is cheaper than keeping a cow all-year-round and therefore can carry bigger numbers of younger cattle when they have not got cows to feed on land.”

He said that if the government provide a payment of €300 per cow, “then more farmers might stay”. “However, as for now, people are changing from suckling because it is not paying.” 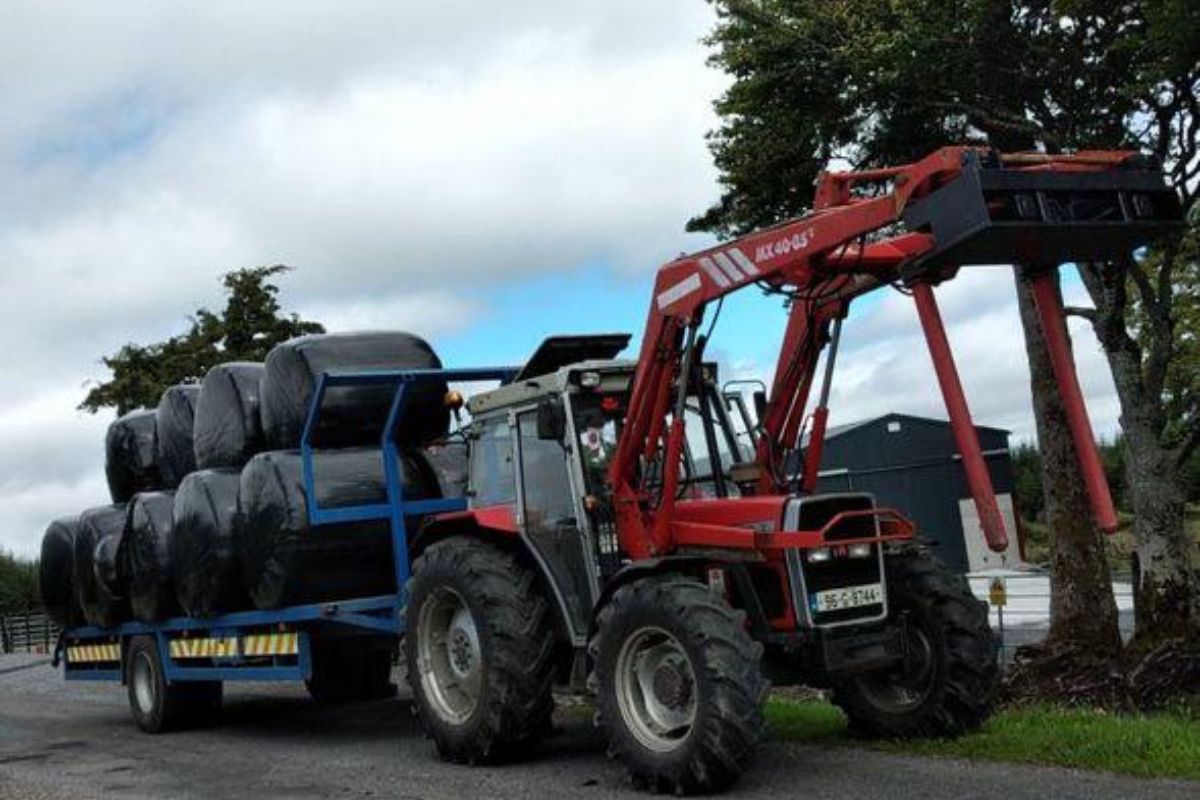 “I think no matter what enterprise of farming you are in, you are not getting rewarded for what you produce, and I don’t think that will ever change.”

“When you go into a supermarket and purchase a product for a certain amount, and then you see how much the farmer gets out of that; it does not feel rewarding.”

“On top of it all, there are vegan, vegetarian and environmental groups on the farmer’s back as well, so I do not think the word ‘rewarding’ ever comes into a farmer’s mind.”

“Looking back on my farming to date, it is like everything else. It has its good days and its bad days, but that is all part of the experience.”

“I would not change a thing about it. Like everyone, I can only learn from my mistakes and build a future,” the part-time farmer concluded.