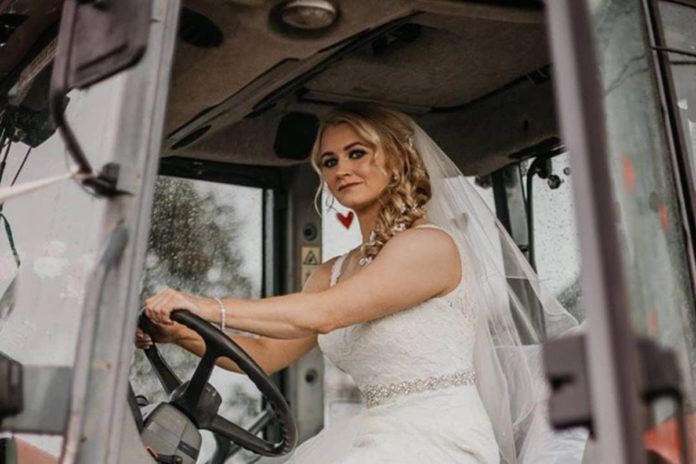 On February 29th, Denise Sweeney walked down the aisle to marry long-term partner, Jason Barber. The Sligo couple’s joint interest in farming formed the theme to their wedding.

Denise, who works as a veterinary assistant in Inishfree Veterinary Hospital, Sligo, met her now-husband over 10 years ago on Halloween night in Velvet Nightclub. Jason’s father was a customer of her veterinary clinic, and this was the common ground that got them talking.

The pair both farm part-time and they decided to include their lifestyle into their wedding. Denise said, “Both of us are into farming – I show cattle and he shows sheep, and we said we would do something daft.”

“We were getting married in Enniscrone and there’s always something different coming in for wedding receptions, so we said we’d go with the quad and it went from there really,” she told That’s Farming.

The day of the wedding threw a few surprises at the couple. Their wedding day coincided with Storm Jorge’s arrival in Ireland. “There was sleet, snow, wind, rain, everything you can imagine.”

Jason was also taken away from wedding preparations to attend to ewes lambing and a cow calving. “I put in a request that everyone holds back the bull and the ram for three weeks but, as the wedding drew closer, I realised I wasn’t listened to.”

“I think we had 9 cows calve that week and 150 sheep lambing that week as well,” she explained.

Denise arrived at the church in a 4270 Massey Ferguson. They had it washed and decorated for the wedding day so she could arrive in style. There was a quad bike for their entrance to the reception as well.

Denise’s show heifer, Ruby Octavia, also made an appearance at the local pub after the church. Denise bought the animal in November, as part of a syndicate with Inismurray Pedigrees, and this was her debut show appearance of the year.

The decision to include the heifer at the wedding was only made the week before. She was brushed up and ready to meet them once they had finished taking photographs at the church.

The attendees at the wedding were unaware that their passion for farming was going to be incorporated into the wedding. It was all kept secret and not even Jason’s family were aware of the plan. “I think they all got a good laugh out of it,” she says.

To pull off this wedding, they needed plenty of help. “The neighbours were great. We had neighbours in on the morning to help bedding and feeding and another neighbour looked after the farm while we were away at the wedding.”

“Only for the neighbours, we would be badly stuck. They all rallied around us for the week,” she concluded.