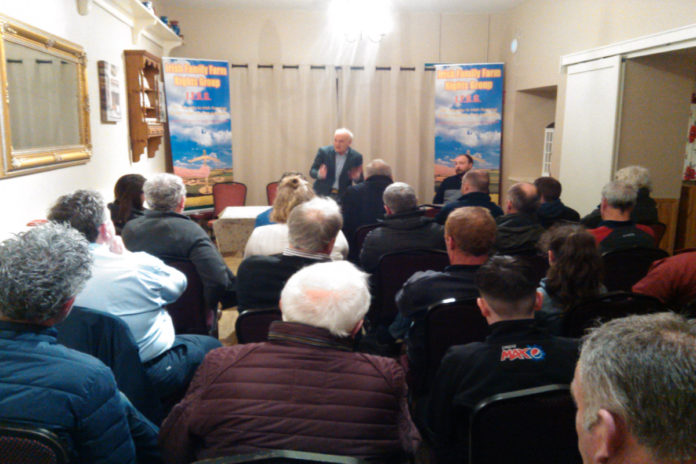 ‘What has been achieved for farmers in the last 18 months?’ – Shine

Donie Shine, national chair of the Irish Family-Farm Rights Group (IFRG), has called on local politicians to listen to the concerns of local farmers in relation to what he called “the runaway crisis, that is now the current state of suckler farmers’ incomes”.

Shine made this statement at a recent public farmers’ petition meeting, held in Menlough, Co. Galway earlier this month.

In this meeting, the farm leader reminded the crowd of the proposals made to the Department of Agriculture last July that would improve the situation of the Irish farming community and reward farmers for their welfare practises.

“The IFRG made a detailed submission to the Department of Agriculture last July, suggesting an outline for how an environmental scheme, to include a €300 suckler cow measure, might work.”

“For example, the IFRG proposed a suckler cow measure that would reward the proper weaning of calves. Therefore, Ireland might reclaim part of the 900,000-cattle export market that the country used to enjoy with Italy.”

He went on to criticise the 4-movement rule, saying it is “denying farmers a decent price for their products at the factory.”

The IFRG oppose this rule and have made a petition against it which currently has 12,000 signatures.

Despite the protests that were carried out all over the country in protest of beef prices in 2019, Shine believes these efforts were in vain and that the farming organisations conducting them have been ineffective.

“Not only have the calls to action by all of these organisations over the last 18 months proven to be an unproductive use of those valuable months but they could well have set back the agri-political cause of improving farmers’ incomes in this country for years to come; farmers no longer have faith in the ability of any farm leadership to deliver on any promise made to farmers into the future.”

“The blockading of factories, the protests outside of retail distribution centres and the occupation of semi-state agency offices have all turned out, and proven themselves, to be nothing more than self-serving, publicity-seeking exercises.”

“Roaring, balling and intimidation tactics might get some people’s names and photos in the newspapers and might serve to stroke the egos of the few public relations ‘warriors’ involved, but they will not serve the concerns and interests of farmers on the ground who need to have constructive solutions put forward on their behalves.” Shine concluded.