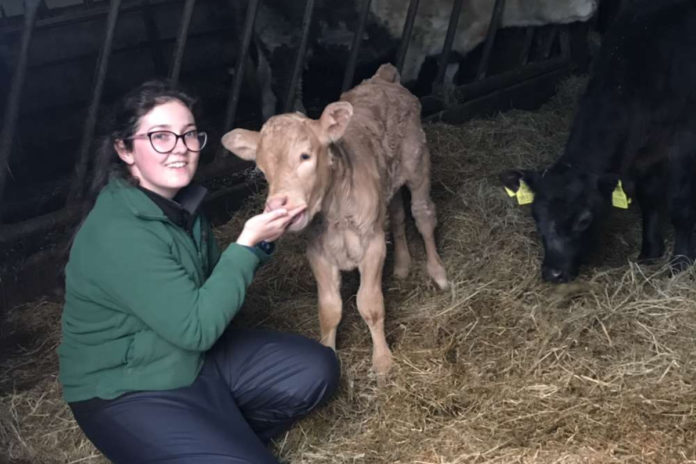 Repeating the Leaving Certificate is a decision that requires careful consideration, but Michaela Doran identified this as the most practical way to chase her dream.

She fell short of the CAO points target to secure a place at Ireland’s only veterinary medicine school. “I decided it was worth spending another few months, repeating to try and get the points for UCD and then I would consider going abroad if it didn’t work out,” she explained to Catherina Cunnane, editor of That’s Farming.

“Thankfully, it paid off in the end; this time also allowed me to consider if this is what I really wanted to do.”

Now in her fourth year, she has completed placement in various small, mixed and equine practices in Mayo, Clare, Galway and South Africa.

“The good thing about the course in UCD is the amount of clinical placement we have to do before we graduate.”

“The course is extremely difficult at times, but I am enjoying every minute. It involves a lot of early mornings and long days in the library, but I wouldn’t change it.”

“It’s a nice mixture of theory and practical work. We spend a lot of days out at UCD’s Lyons Farm which breaks up the long day of lectures.”

Growing up on a 200-acre farm, comprising of 25 suckler cows and 150 sheep, coupled with other influences, carved out her career path.

Her parents moved back from the UK in 1999 to assist the 23-year-old’s grandmother and uncle on-farm after her grandfather passed away.

“I was very young when I first realised that I wanted to be a vet – I remember bottle-feeding pet lambs and the excitement of getting up any night there was a cow calving.”

In recent weeks while spring-cleaning, Michaela stumbled across a booklet from her childhood. “It had the question: ‘What do you want to be when you grow up?’ And I had said a vet.”

“I grew up watching the programme ‘Vets on Call’ – I loved it! I would say my parents have influenced my career path.”

“My mum had always wanted to be a vet but never went to college to pursue it. She recalls her mother telling her that she was too short and that the swish of a cow’s tail would knock her over.”

“I am the same height as her but she always told me that I should never let anyone tell me I couldn’t do something because I am a girl or too short.”

The Mayo native continues to farm alongside her father, uncle, Eugene, and brothers; Mike and James in between her studies and part-time work as a waitress in a hotel and a receptionist in a veterinary clinic.

“When farming, no two days are the same. At this time of the year, seeing all the lambs and calves jumping in the fields brings me so much joy.”

She feels that she is not taken seriously enough by others in the sector, at times. “I think some farmers think a young girl like me couldn’t possibly be a vet student.”

While on placement, she said she receives remarks such as: ‘Oh it’s a hard job you are going into…up late at night’, ‘What are you going to do when you have a family?’ and ‘You like this type of work do you?’.

“Comments like these annoy me sometimes but I just get on with it.”

“I think there are still some older, more traditional farmers out there that would much rather see a male vet arriving rather than a female.”

“Some may just assume she isn’t going to be as good at her job as a man would be because she might not possess the same strength, but strength is not the most important thing.”

“Veterinary medicine is such a rewarding career – I couldn’t see myself being involved in anything else, to be honest.

She admitted that entry to the course in Ireland is difficult due to competition, but advises aspiring vets to focus on their Leaving Cert and to construct a plan B by considering options overseas.

“If you’re anything like me, you will have days that make you question if all the stress is worth it, but I can assure you it is.”

Once she graduates next year, the Mayo native plans to work in the UK, on the basis that Brexit does not present any major issues.

She hopes to remain here for up to two years, before venturing to New Zealand/Australia where she will work/travel for a further year.

“I would then probably return to Ireland and set up roots here. Originally, I would like to work in a mixed practice for the first few years as that is just the life I grew up thinking about.

“Then, depending on where I end up, I will either stay in mixed practice or work in a small animal practice.”

“I just want to be happy with the job that I’m doing. I don’t want to dread getting out of bed to go to work in a few years,” Michaela concluded.