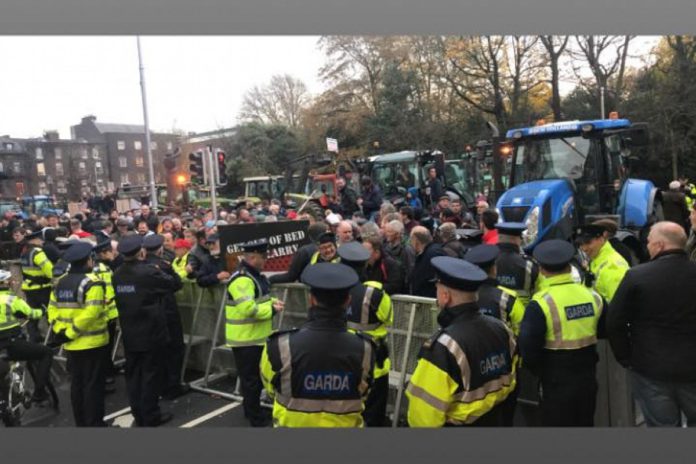 Unless the underlying issues of “inequalities” that are the “hallmarks” of the beef sector in Ireland today are addressed, once and for all, farmer protest will continue, according to Monaghan MEP and general election candidate, Matt Carthy.

He said that the latest farmers’ protest in Dublin “clearly shows that beef farmers are at breaking point”.

The Sinn Féin representative confirmed that he has been in contact with members of the protest, which gathered in Dublin city centre, and that he supports their demands for a fair price for beef in order to sustain their livelihoods and the communities depending on them.

“Nothing has improved” since last protest

Matt Carthy said: “This latest protest, which saw some 400 tractors on the streets of Dublin, highlights, yet again, that farmers are at breaking point in counties like Monaghan because, despite the promises of Minister Michael Creed and the government, nothing has improved for farmers since they last protested in November 2019.”

He believes the ongoing Beef Taskforce has yet to deliver the required reforms and that farmers have returned to the streets of Dublin to signal their despair.

“Throughout recent years, farmers have articulated the crisis they are in. Rather than enacting real and meaningful measures to address that crisis, the government has overseen its exacerbation.”

“The free rein that has been given to the factories and retailers to manipulate the market position of farmers has been such that the emergence of these types of protest has come as no surprise.”

Carthy said that farmers are not asking for anything “radical” – they are, he added, simply requesting that they receive a fair price for their product and a guarantee that they will be paid more than the cost of production.

“I commend those farmers who have taken a stand and who have now placed the challenges they face at the centre of this election campaign.”

“For our part, Sinn Féin will continue to stand with farmers on the picket line for as long as it takes because we understand that without our family farmers, rural Ireland as we know it, will not survive.”

“In government, we will enact the legislative measures necessary to ensure that farmers receive a fair price for their product – we will stand up to the beef barons and multinational retailers!” he concluded.