At eighteen, Rachel Gallagher is one of Ireland’s only and youngest pedigree Dutch Spotted sheep breeders.

The Portsalon, County Donegal native established her own flock of Dutch Spotted sheep on her family farm, which she runs with her father, Tony, a full-time farmer.

Rachel farms the 50-cow suckler herd and 140-ewe flock on a part-time basis whilst studying a Level 8 Bachelor of Science in Agriculture at Letterkenny Institute of Technology, Letterkenny, Co. Donegal.

She told That’s Farming: “I have always been very interested in farming since I was very young.”

“I come from a family where farming has always been a very strong tradition, and the farm has been in our family for over five generations.” 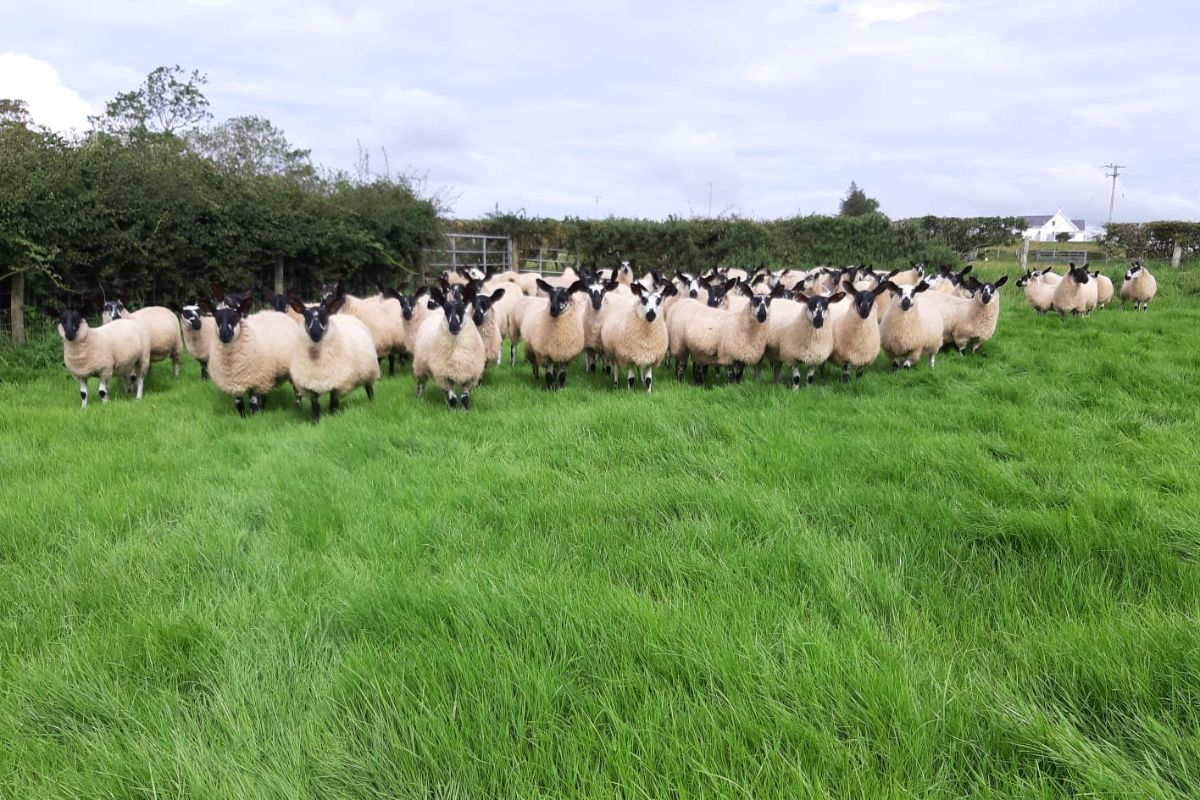 “We have these breeds because Milfords are a very prolific breed, are easy lambed and are great mothers. I decided to go into Dutch Spotted sheep because I had seen them at a few shows,” Rachel explained.

“I viewed them as a real up and coming breed with unusual markings, making them very eye-catching. Also, they have a great carcass making them have great potential for commercial farmers.”

This admiration for the breed led her to acquire her first in-lamb ewe at the Christmas sale in Carlisle in December 2019. She then imported six ewe lambs from Holland in January 2020 before purchasing her stock ram, Ty-Gwyn Defender, from a renowned UK-based breeder in July.

The Donegal native then returned to the Christmas sale in Carlisle in 2020, where she invested in a hogget ewe.

Her most recent purchase was just last week at the Spring Stars sale in Beatties in Omagh. “I purchased the second-highest priced sheep, Glenloy Eva, for 4,100gns. I cannot wait to see what she brings to the Croaghross flock.”

Gallagher has been elected onto a 5-strong council as its first PRO (public relations officer), overseeing communications.

“The association has a lot of plans for the coming months. One of the committee’s plans is currently organising our first premier sale of males and females. We will hold this in Carrick-on-Shannon on Saturday, August 7th, 2021.”

“There will be a selection of males and females from all over Ireland, so this would be a perfect opportunity to buy some spotties.”

“The breed is becoming more and more popular every year, both pedigrees and for commercial use. This is because of their docility, their quick thriving rates and ease of lambing. They are quickly up and sucking all by themselves, which is a great bonus for commercial farmers.”

Rachel is keen to encourage other sheep farmers to incorporate Dutch Spotted genetics into their breeding programmes by offering surplus breeding stock for sale annually.

She operates a strict culling regime and focuses on selective breeding and superior genetics. “I strive to breed sheep with a good carcass, good size and shape with an eye-catching head.”

“We sell all our Dutch Spotted lambs for breeding to both pedigree and commercial flocks.”

“We lamb the spotties in February and our Milfords lamb in March as part of an indoor lambing system. In addition, we installed lambing cameras before the 2021 season kicked off, and they have proven to be a worthwhile investment.

“We lamb our spotties in February, so they are finished lambing before the Milfords start in March because we need a lot more room when they start lambing.”

“We lamb our Milfords in March as with better weather conditions, we can turn them out to pasture immediately post-lambing.”

“The most enjoyable aspect of farming for me is selling my lambs each year and seeing them do well for the people who buy them,” added the Milford Sheep Breeders’Association members.

The father and daughter team have exhibited Milfords at their local shows and have been very successful over the years, picking up champion and reserve champion silverware.

“I was hoping to start showing my spotties this year and last year. However, with Covid-19, there have been no shows so far. Hopefully, I will get out to a few shows next year.”

“The area of agriculture that I am most passionate about would be ovine genetics – striving to breed the best, top- quality sheep for the market.”

“My main responsibilities on the farm would be feeding and all the jobs that come with owning sheep. It takes patience and a good eye to become a successful sheep farmer.”

“I would tell young sheep farmers to take their time, conduct research and learn from the mistakes they make,” added Rachel, who has just finished her first year of college.

And it is by advocating that philosophy, that the Donegal student hopes to help her Dutch spotted flock reach new heights. She intends to attend shows and sales to raise her flock’s profile.

Set to graduate in 2024, she is considering travelling to New Zealand or Australia at some point in the future to gain an insight into sheep systems worldwide before returning to home turf.

“We have 50 suckler cows, but sheep come out on top. Dutch Spotted sheep are a bit like a drug. Once you buy one, that’s you hooked. My ultimate goal is to have a very successful, well-known Dutch Spotted flock.”

I do not find life as a woman in ag tough as I have been farming and going to marts since I was very young, so nobody treats me any differently.”

“I would say I am treated the same as male farmers for most of the time. However, in my view, there is a small percentage of male farmers that treat you differently, which can be testing.”

“Life as a young person in agriculture is fascinating and enjoyable with never a dull moment, but I wouldn’t want it any other way.”

“I think the future of agriculture is going to be more difficult. However, I think young people will still go into farming and make it work for them and their farms,” concluded the Dutch Spotted sheep breeder.