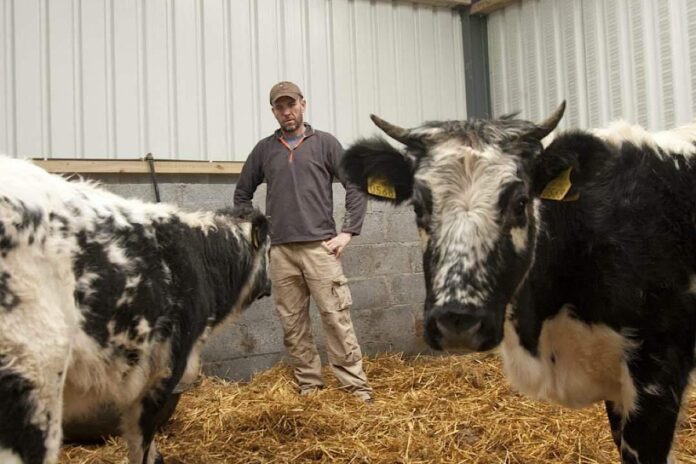 In this week’s Suckler Focus, That’s Farming, speaks to John O’Halloran. He discusses farming alongside his wife, choosing a native Irish cattle breed on the farm, calving cows outdoors and selling Droimeann beef through his local butcher.

Cows losing body condition during a harsh winter five years ago enticed John O’Halloran, and his wife, Marcella, to venture into a native breed of Irish cattle, Droimeann.

The Galway-based couple said the first characteristics that appealed to them most were the breed’s hardiness and ability to graze “lightly” on land.

Five years ago, they invested in two pedigree Droimeann cows from Tom Keane, Askeaton, of the Mountpleasant herd as a “hobby”.

The husband and wife team previously farmed Charolais-crosses, Limousin-crosses, and Simmental-crosses. They later decided to cull these cows in their journey to purchase all Droimeann females.

The enterprise (which consists of 50% leased land) comprises 46-acres of grassland and 24-acres of mountain-type land.

“My grandfather, John, and grandmother, Delia, were farmers, and my wife, Marcella, was originally from Ardagh, Longford. So, both sides of my wife’s grandparents were farmers,” John O’Halloran explained to That’s Farming.

“My grandparents operated a suckler farm. They had Shorthorn, Hereford, and Angus cattle. Around 1988/1989, there was a mixture of Shorthorn, Angus, and Charolais cows. The continental blood was coming in at that stage.”

“My wife is the real passion behind the Droimeann breed. She is mad into it. I do what I am told.”

Their eldest daughter, Darwyn, hopes to follow in her parent’s footsteps.

She is completing a Distance Education Green Cert Level 6 course part-time at Mountbellew Agricultural College and has a Bachelor of Science (Honours) in Applied Freshwater and Marine from GMIT.

The husband and wife’s interest in keeping native and Irish breeds alive and involvement in conversation projects spurred the choice of Droimeann cattle, having initially considered Irish Moiled cattle.

They said the date January 8th, 2020, “boosted” their journey when the then Minister for Agriculture, Food and the Marine, Michael Creed, granted rare breed status to Droimeann and other cattle breeds.

The husband-and-wife team initially considered venturing into organics when establishing their Droimeann cattle herd but decided to maintain a conventional farming system – due to land availability and rising feed costs.

“It would be not a huge thing for us to go organic regards stocking density or fertiliser; that is not an issue.”

“We were looking at buying a bale of fodder or organic feed, and we said it was way too much money for where we are in the west of Ireland.”

The team said the Droimeann Cattle Society is working on progressing an AI programme. According to the couple, scanner, Shaun McGreal, undertakes the scanning of cows.

They will calf their cows in May this year, which allows for grass growth and milder weather conditions, equating to longer days for grazing cows post-calving.

“This year, we have one Droimeann heifer in-calf, and she will be due in two weeks. The other heifers were too young; they were only weanlings.”

“The other cows last year were calving all over the place as we found it hard getting a stock bull during the Covid-19 lockdown, but the calves we have, have come out great.”

“Looking forward to the future, a tighter calving pattern would be much better. Cows nearly all calve outdoors, but we are converting a couple of old sheds. So, at least now, we will have more secure accommodation.”

They plan to sell excess heifers on-farm and do not currently cull any cows.

“I am not culling cows since they are in-calf. If we sell any cows, it will be through a sale.”

They intend on sending up to two bulls to Clifden Mart or Maam Cross Mart, with one of these potentially going for breeding as a stock bull through an on-farm sale.

Furthermore, they manage their farm in a rotational paddock system, and grass measure by the “eye”. They graze animals in the summer on the mountain-type land.

The husband and wife started selling beef directly from their farm as a small farm-to-fork lockdown experiment.

They slaughter some bullocks annually, aged 28-months-old with Laurence McGonagle of Des Moran Butchers, Clifden, who hangs the carcass in a cold room for 28 days.

According to the husband and wife, Laurence’s preferred animal is one with a good physical appearance and weighs 500kgs live weight.

The husband and wife further outlined that the Droimeann bullock that weighed 570kgs came in at 295.5kgs (cold carcass weight).

“I only slaughtered the bullocks as we needed heifers to boost herd size and also would have a good farm sale value.”

Their meat is available as a 10kg hamper of grass-fed beef and includes chucks, steaks, mince, and roasts.

“There is no set price on the hampers this year yet. It will be dependent on our overall costs.” 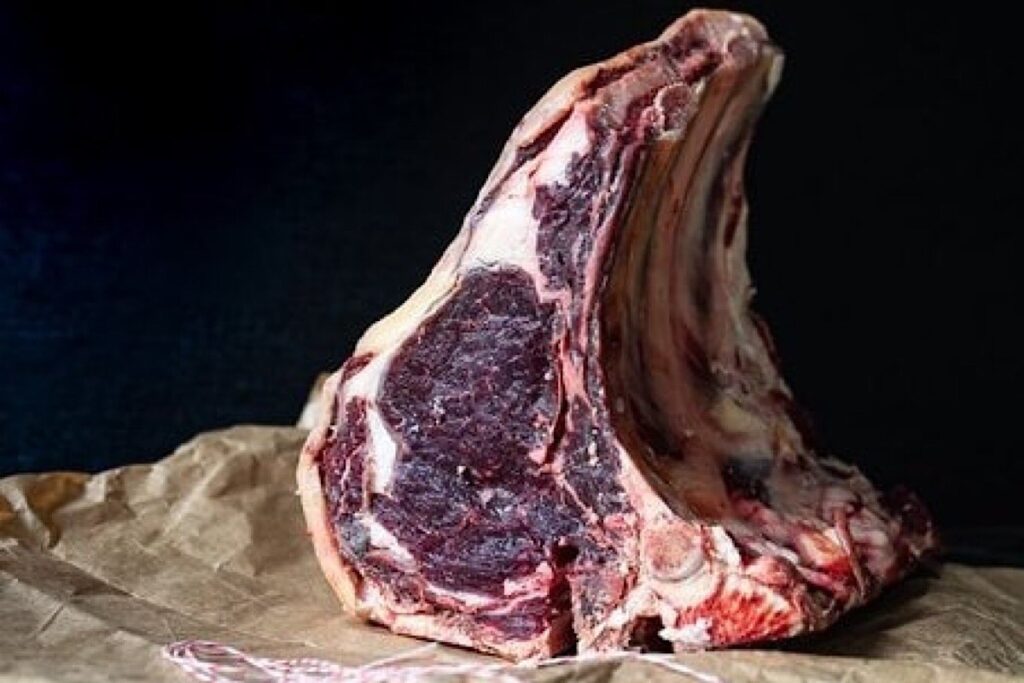 “Droimeann beef is grass-reared, traditional, and something we ate in Ireland for hundreds of years on special occasions. It is a salty-sweet deep flavoured meat.”

Commenting on feedback from the public, they said: “They are all waiting for the next batch of meat. I think the next boxes of meat we sell will be completely sold out.”

Commenting on whether it is a justifiable venture, the husband and wife said, “we are only really experimenting yet, but we are very interested in it”.

The couple has plans to sell more family boxes this October and maintain their current offering of a 10kg hamper.

“We like the idea of local food, meat and connecting consumers to the products. So, we are going to do boxes through our local NeighbourFood online shop and direct from the local butcher.” 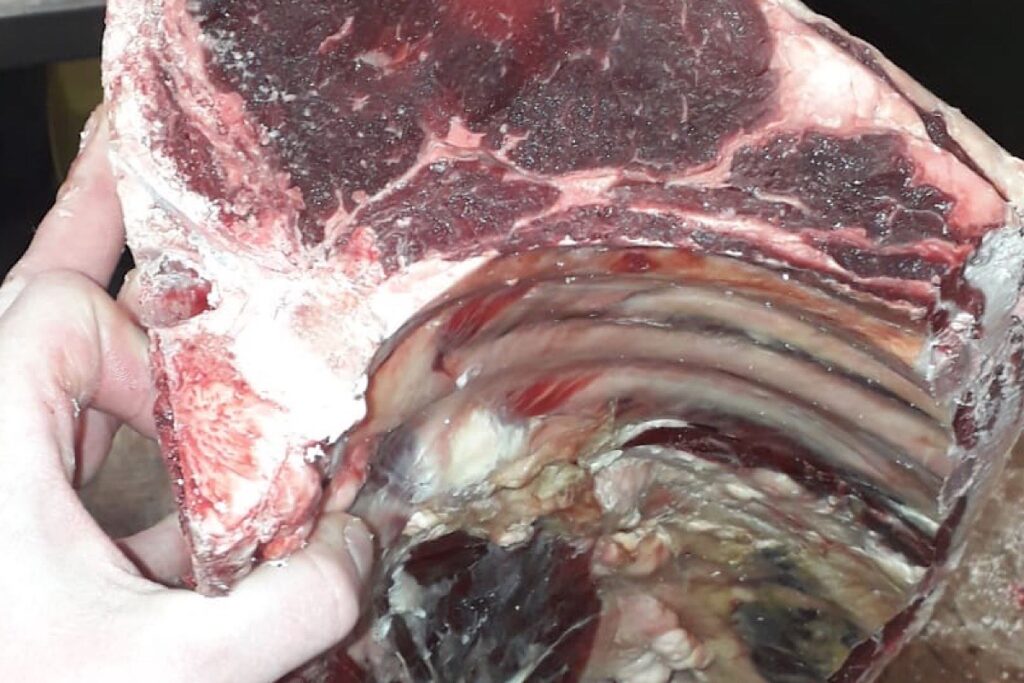 The husband and wife plan to continue selling food produce and, in the long-term, hand the farm’s reins to their daughter.

They have no plans to undertake any herd expansion, as it stands.

“I am worried about the suckler farming part of life. We are in trouble with rising costs and negative misinformation in some media about farmers.”

“The sound of the Irish countryside has been the lowing of cattle for thousands of years. Agriculture and cattle have been part of Ireland and our history for over 5,000 years. It is a proud tradition and record.”

“Hopefully, Irish people will support Irish farm families. I am happy to do what I do as my little niche as a small part of farming.”