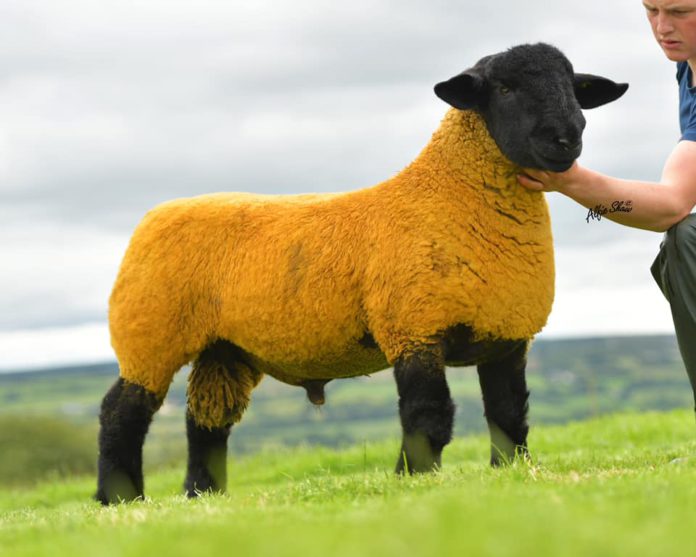 A Donegal-based family secured the overall top price of 50,000 gns (equates to approximately €55,300) at the Suffolk Society’s Scottish area sale across the waters in recent days.

The seven-month-old ram lamb from Mullinvale Suffolks, owned by the Menamin family from Lifford, went under the hammer at Lanark last Friday (July 24th).

The society said that the animal, which was secured by Stewart Craft, Lakeview flock, “set the scene” at the “electric” ram sale.

Ahead of the sale, the breeders described lot 88, a Plasllewelyn Pure Genius son, out of a Cavanagrove Cataslyt-sired dam, as a “lamb with great colours and style, a total outcross”.

‘We will never forget’

In a post on social media, Mullinvale Suffolks, said: “WOW….Where do we start.? Just coming down to earth after an amazing few days one which we will never forget.”

“Would like to thank L&S auctioneers for a well-organized sale under the current circumstances and restrictions.”

“We would also like to thank all the bidders and all who viewed our pen. Receiving the top price of the sale at 50,000gns, to us, it’s a dream, especially on our first year to Lanark.”

“It makes it all worthwhile. Finally, we would like to thank Lakeview Pedigree Suffolks and wish them the very best of luck with him. Already looking forward to seeing his offspring!!” the social media post concluded.

Other notable prices on the day included 32,000gns for a Salopian Scuderia-sired ram out of a Benedyglen dam from Michael & Caolan McNally’s Benedyglen flock.

30,000 gns was forked out for a Salopian Scuderia sired ram lamb out of a Thurston Urastar-sired Birness bred ewe frp, George Stuart’s lot 18, which was jointly bought by L & M Liggett of Co Tyrone for their Carony flock and Darragh McMenamin from Donegal for his Mullinvale flock.

There was then a flurry of four lambs at 26,000gns. George Stuart’s Birness Lamb set the tone of the sale early on with lot 15 and Dennis Taylor purchasing this Limestone Legacy-sired ram out of a Birness bred ewe.

Stewart Craft’s Lakeview flock then had two at the same price tag both going to Darragh McMenamin’s Mullinvale flock in Donegal.

These ET brothers were Strathbogie Stradivarius-sired rams out of a Birness bred ewe.

A R Gault’s Forkins’ lamb, Lot 190, also went under the hammer for 26,000gns. This Mullaghboy Goliath-sired ram out of a Forkins ewe went to an international syndicate of Mark Priestly’s Limestone flock, Llavandera Suffolks from Spain and MaCCauley Suffolks from the USA.

Next up at 13,000gns were lot 78 from S & W Tait (Burnview flock) bought by Paul Delves (Bridgeview) and lot 151 from James C Innes (Strathbogie flock), bought by Shaun & Ruth Turkington for their Beechcrest flock in Northern Ireland.

The first, lot 48 was purchased by George Stuart for his Birness flock, and the second, lot 50 went to Eamonn Duffy’s Kells flock in Ireland.

‘The sale started with a bang’

Suffolk Sheep Society chief executive, Robin McIlrath, said: “This has been an excellent sale despite the obvious challenges facing agriculture. The sale started with a bang and kept the pace up throughout the day.”

“I was particularly pleased that there were quality prices throughout with a good strong bottom end. This is the third year-in-a-row that the sales average has recorded an increase which is very encouraging for the breed.”

“It has been a difficult year for our breeders with lots of uncertainty, and it’s great to see such a buoyant and positive sale on the back of some challenging months, not least with the coronavirus pandemic.”