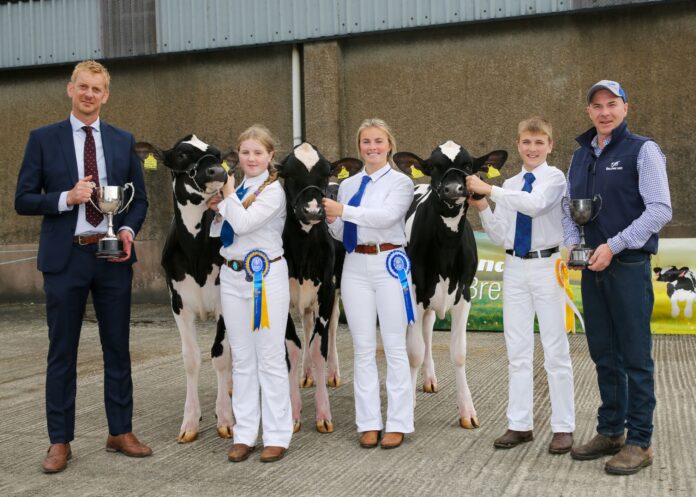 Over 200 Holstein calves and young handlers were entered and took to the show ring at Dungannon Farmers’ Mart on Friday, August 19th, 2022, to compete in the 19th Multi-Breed Dairy Calf Show, writes Andrew Patton.

The show, which is solely organised and run by the Holstein Young Breeders’ (HYB) Club is being hailed a great success, an event which is growing exponentially year on year, was shortlisted for Event of the Year at the 2019 Farming Life Awards.

“I thoroughly enjoyed the day. The standard of both the showmanship and the calves were fantastic,” quotes Mr David Hodgson, who had the onerous task of judging the largest Holstein calf show on record.

David hails from the Wormanby herd, Cumbria and is no stranger to the show circuit, having judged at many shows on both sides of the Irish Sea whilst having great success in the show ring, along with being named the UK’s Premier herd in 2015.

On the day, young breeders’ members are put through their paces in the showmanship classes, which are sponsored by World Wide Sires UK, as well as taking to the ring once more in the afternoon for the calf conformation classes, sponsored by Thompsons Feeds.

Exhibitor Bred awards are also up for grabs in each class, sponsored by Western Farm Enterprises.

New sponsor, Blondin Sires UK, was also welcomed on board this year as the sponsor of the new Interbreed Championship Award.

Thanks are given to Mark Logan & Clandeboye Estate for providing a brand-new trophy for this – The Clandeboye Cup, presented in memory of Lady Dufferin. Something which has been in discussion over the last number of years, it was a great pinnacle to the day.

A grand total of 62 young members sweated it out in the showmanship section in their various age categories, an increase of 20 young handlers from last year. The eventual Showmanship Champion & the Hamish Logan Trophy was awarded to Ava Montgomery, Saintfield.

“We have had some huge classes today and we have ended up with what I class as the top five handlers here today,” said judge David Hodgson during the showmanship championship.

“I feel my top five handlers could show cattle at top shows anywhere in the world – they are of such a high standard.”

Each of the first placed handlers, from the qualifying classes, will now go forward to represent the club at the All-Breeds All-Britain Calf Show in Peterborough in October.

The All-Breeds All-Britain Calf Show is a national event which takes place each year and sees the top regional showmanship and calf class winners compete it out for the national title.

This year the event will take place from Friday, October 14th– Sunday, October 16th, and along with our champion and reserve handlers, Simon Gregg, Ballymena, and Callum Reid, Drumbo will represent Northern Ireland in the hope of claiming the top spots.

Once the handling classes were complete, the calf classes soon got underway.

Calves are judged in age-sorted classes, and the top two placed calves in each class are invited back to compete for the overall Champion award.

After picking out his final six calves in the championship, judge David Hodgson said: “I am always looking for calves that will go on and make great cows in any system, calves with dairy character, strength at the front end, the strength of loin, wide rumps, good legs and feet and I feel that the six calves in front of us here today carry all of these attributes.”

David then went and tapped out his champion, reserve and honourable mention calves, with top honours this year being awarded to the Mclean Family with Priestland 7085 Master James Rose.

“This calf epitomises everything I look for in a calf; her balance and style are second to none,” said David Hodgson, judge.

Following the champion, in reserve and honourable mention positions were two calves bred and owned by Alan and Leanne Paul, Maghera, with Reserve Champion being awarded to Slatabogie Doral All Rich Red.

Our prize winners from each calf class also find themselves in a qualifying position for the national All-Breeds All-Britain calf show.

However, this year due to new Brexit restrictions – for the second year, this is, unfortunately, seeming to be an impossibility.

In his closing remarks, judge David Hodgson said: “The level of support that Northern Ireland HYB achieve is just about the best that you could find anywhere.”

“I believe that the final six calves that I pulled out for my championship were of a level to compete anywhere, and thanks go to the club for their invitation over to judge; it has been both an honour and a privilege.”

To wrap up the day’s events, Holstein judge David Hodgson teamed up with Ayrshire and Jersey judge, Mr Sam Wake, North Hants, to tap out the eventual winner of the Interbreed Championship award, who would take away the new Clandeboye Cup, in memory of Lady Dufferin.

Exhibited by the Sizzler Syndicate, Andrew Kennedy, Mark Henry, David Simpson, and Rory Timlin, the winner went to the Jersey Champion – Treasure Andreas Fernleaf ET. Thanks must go to Mark Logan and all at Clandeboye Estate for making this a possibility.

Thanks must go to our sponsors for the day, without whom the event would simply not be possible – World Wide Sires UK (showmanship), Thompsons Feeds (calf conformation), Western Farm Enterprises (exhibitor bred) & Blondin Sires UK (interbreed championship).

Thanks also go to our stewards, Leiza Montgomery, Saintfield, Geoffrey Patton, Carrowdore and, Alec Walker, Randalstown, for ensuring the next class is always ready, enabling the event to run so smoothly.

The club are also indebted to our commentator for the day, Mr Michael Taaffe, Milltown and world-renowned photographer Jane Steel, Kepculloch.

We would also like to thank the Ayrshire and the Jersey Society along with Dungannon Farmers’ Mart, without whom the NI Multibreed Calf Show would not be where it is today.

Full results from the Holstein section to follow in a second news article.