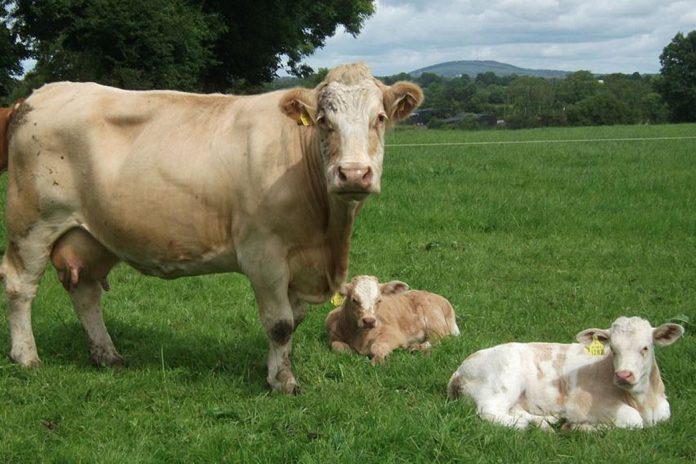 The average income on suckler farms in 2019 rose by 11%, bringing the figure to €9,188, according to the Teagasc National Farm Survey.

Average gross output on cattle rearing farms (suckler enterprises) increased by 2% year-on-year to €36,715, with the average direct payment increasing by 12% to €14,706.

Additional support payments in the form of the Beef Exceptional Aid Measure (BEAM), added on average €780 to the average suckler farm while payments under the Beef Environmental Efficiency Programme (BEEP) contributed an average of €482 last year.

Total production costs fell slightly in 2019, with this figure down 1% on the previous year’s levels.

The main driver in the 8% decrease in direct costs, which fell to €12,363 on the average farm, was spending on feedstuffs, the report states.

Expenditure on concentrate feed decreased by 20% on average to €3,197, with purchased bulky feed expenditure also down by 22% on 2018-levels.

Teagasc said that fertiliser expenditure decreased by 8% per cent, due to both a fall in usage and increase in price, bringing the average farm spending €2,306 in 2019.

As with other farm systems in 2019, spending on contracting charges also decreased on suckler farms, by 2% to €2,978 on average.

The state agency noted that overhead costs increased by 6% with and increased depreciation costs for machinery and land (up 23 and 10%).

Spending on land improvement rose slightly in 2019 by 4%.

There was a 4% increase in farm size to almost 32 hectares on the average suckler farm in 2019, with a decline in the proportion of rented land also noted.

Although average direct payments are lowest on suckler farms with this figure standing at €14,706, the reliance on these payments and their overall contribution to FFI was 160 percent in 2019, the highest on record, the report adds.

“This indicates that the average suckler farm, with a FFI of €14,706, spent over €5,500 in direct payments over the course of the year to cover the farm’s operating loss.”

The data also shows that only 2% of suckler farms earned more than €50,000 last year.

The proportion of viable suckler remained very low at 13%, 2 percentage points up on the 2018 level, the report added.

The proportion of vulnerable cattle Rearing farms remained unchanged in 2019, at 43%.

This average income per hectare on suckler farms remains about one-quarter of that of the comparable figure for dairy farms, the report authors outlined.

- Advertisement -
Previous article
Lively trade for sheep at Kilkenny’s first sale of 2020
Next article
Quiz: How well do you know EBY?