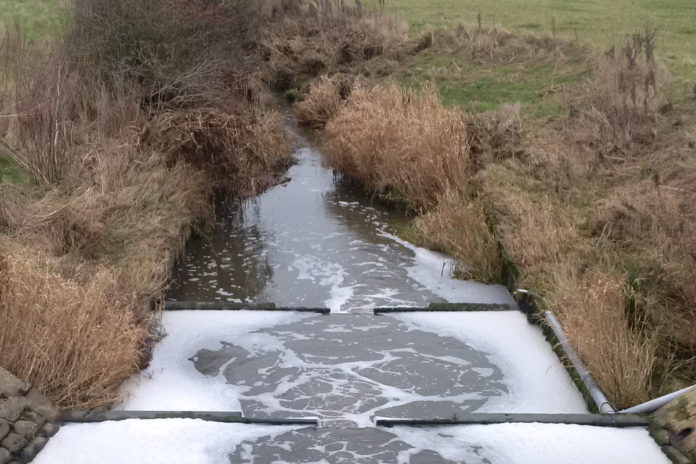 An agricultural college has been fined for causing the deaths of more than 1,500 fish, after management failings caused slurry to significantly pollute a nearby stream.

Judge Shani Barnes said the Environment Agency had worked tirelessly to bring the college into regulatory compliance over the past few years.

The court heard on November 29th and 30th, 2016, that contaminated water containing a high amount of cow slurry was spread onto a field known as 15 Acres, at Wales Farm, now known as Lambert Farm, managed by Plumpton College.

This work was carried out by head herdsman, Stuart Duncan, despite the volume spread being many times more than the field could absorb.

As the ground was also frozen, much of the contaminated water ran off into ditches and land drains, which then flowed into the nearby Plumpton Mill Stream, the court heard.

The pollution, classified as a category one incident by the Environment Agency – its most serious level.

The stream smelled strongly of slurry, and the watercourse was visibly brown with foam on the top.

Many of the dead fish were protected species, such as migratory trout.

The Environment Agency became aware of the incident after it was reported by a member of the public.

The college did not report the pollution had occurred, and nor did it have an emergency plan in place for dealing with slurry spillage, according to the agency.

The agency has been in regular contact to advise the college on its management and operations on number occasions since 2011, because of concerns about incidents and non-compliances with agricultural regulations.

The college admitted the incident was the result of a mistake by a member of staff.

They admitted that the actions taken to spread the slurry were wrong, as the weather conditions and field were not suitable for this to take place.

Prior to sentencing, Duncan accepted a formal caution for his actions contributing to the incident.

Ed Schmidt, environment management team leader in Sussex for the Environment Agency, said:  “Poor management, a lack of contingency planning and inadequate infrastructure at the farm resulted in a totally avoidable pollution incident that had a disastrous effect on the local environment.

“It is even more disappointing that a college that specialises in agricultural practices and teaches farmers of the future failed to take all reasonable actions, and was wholly negligent in preventing this incident from occurring in the first place.”

“The outcome of this case should be a clear and strong message to all people working within the farming industry to ensure they think about the actions they take when managing highly polluting liquids.”

In a statement, a spokesperson for the college, said: “This pollution incident happened in November 2016. The college took some solace today from the judge’s finding, which supported our own internal investigation, that this was attributable to an inexplicable course of behaviour by an ex-member of staff who left the college in 2017, and that had this individual not acted in this way, no pollution event would have occurred.”

“Judge Barnes supported the college’s view that the incident was not indicative in any way of the College’s current performance and standards and indeed praised the significant progress made over recent years.”

“The college is looking forward to receiving record numbers of land-based students for the start of the new academic year, as it continues to achieve some of the highest pass rates amongst its peers nationally. Its new cohort of agriculture students will learn on the farm which is today accredited by Red Tractor and the prestigious LEAF Marque for its environmentally friendly farming practices.” the spokesperson concluded.