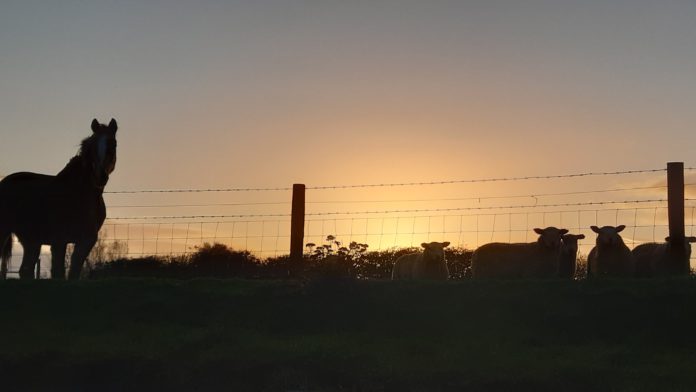 A Day in the Life by Clodagh Hughes

No two days on the farm are ever the same and this is why the agricultural lifestyle appeals to me so very much.  You could start your day with a clear outline of your chores ahead, but by the time lunchtime rolls around you just have to give in to the fact that working with animals and nature will tend to overrule any plans you’ve made.

It could be any number of things such as, unexpected lame sheep, damaged fencing or running low on feed.  I was faced with all of the above last week.  Now, the running low on feed was my own fault and a quick trip to my local agrimerchants soon rectified this issue.  The broken fencing was a bigger issue and involved me “hammering a job on it” as we say until my husband is free to help me fix it up more permanently.  It’s amazing what a pallet and some branches can achieve when strategically arranged­­­­­ and don’t forget the baling twine.  Watch out MacGyver!

As for my lame sheep, although we’ve had a good dry spell recently, the ground here is still very wet and mucky and unfortunately a few of my girls have succumbed to foot scald which, although a very manageable condition, can be a time consuming task, as it requires gathering in the whole flock to treat just those affected but it’s well worth the effort and they recover quickly.

We got a trailer load of lovely hay safely home and into the shed as the ewes enter their third month of pregnancy (I hope); I’m waiting on my scanner to get back to me with a date for scanning.  I’m starting to get really anxious now to see if they are all in lamb since my crayon marking system wasn’t up to scratch this breeding season.  With sheep being so woolly, you can imagine it’s not easy to actually tell when they are in lamb, especially in the early stages.  Only time will tell.

My pups are coming on remarkably well; they’ve settled in with the daily routine so effortlessly and are a constant source of enjoyment and mischief in equal amounts.  Every day is a school day for both them and me, and some lessons are harder learned than others but that’s life and it’s better they learn now as youngsters rather than later on when it’s trickier to get rid of bad habits.  This goes for me also!  I’ve also solved a little mystery that was bugging me lately, and that was; where had some of my eggs been going. Well, who do you think the egg thieves were?! That’s right Peadar and Finn, no wonder their coats were looking so glossy lately.

Finally folks, I’m very disappointed in myself… I’ve left 2 college assignments till the last minute and I’m starting to sweat a bit now, they’re both due before Thursday of this week and I’ve only myself to blame.  I’ve never left an assignment this late…Aaaghh!

Clodagh is from  Inniskeen on the Monaghan/Louth border and is currently studying the Green Cert distance course in Navan run by Teagasc.