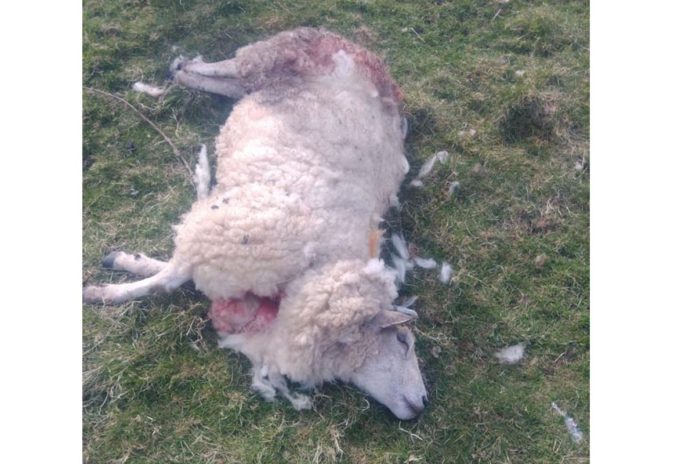 Graphic Content: Over €4,000 worth of damage caused by brutal dog attack

Glen Keogh, from North Dublin, was the victim of a serious dog attack on his flock of ewes, which were heavily in-lamb.

6 sheep were killed in the incident which occurred at midnight on Monday (March 23rd); Husky dogs got free from their home and proceeded to attack his sheep in a nearby field.

The dogs attacked the ewes, killing and eating some, while others had to be put down as a result of their injuries. The farmer was alerted to the attack by a neighbour who saw the two dogs eating a dead ewe.

Speaking to That’s Farming, Keogh said: “He rang me around 12 o’clock yesterday (March 23rd) and that’s not a call anyone wants to hear. I rushed over and called my brother to bring the shotgun. It’s about a 20-minute drive away and it’s the longest 20 minutes I ever drove.”

“We got there and the dogs were still eating away. The two of us went out and the dogs came straight for us, so we shot both of them. Then the nightmare unfolded.”

After initially thinking there was only one ewe dead, Glen was horrified to see that there were more casualties in the flock that he built up through years of hard work.

“I went to count the sheep. There were 17 missing, and that was a nightmare. I found a group of them that had broken through a fence and were hiding in the forest but there were 6 ewes that were badly eaten.”

The pair decided to call An Garda Síochána to file a report and to try to identify the dogs. The dog warden arrived at the scene to read the dog’s microchips and located the owners.

The owners admitted it was their dogs and agreed to speak with Glen in the coming days to reconcile the situation. “It was a nightmare. I never want to go back to that day,” he admitted.

Keogh said that visibly, there has been €4,000 worth of damage done to his flock, but it remains to be seen how many will have aborted due to the stress of the incident.

Not the first time

Keogh has been the victim of numerous dog attacks on his sheep and said it is rare that he sees any kind of compensation for his losses. “I’d say I’ve killed over 100 dogs over the years and in all that time, I’ve never received one penny, but I know that the law has changed recently.”

“I’ve no problem with people that sort their problems out but every time I’m often left wondering ‘is this guy going to stand up to his responsibilities?”

Keogh wants people to take more responsibility when it comes to their pets. “You can’t take it for granted that your dog is locked in unless you check,” he concluded.