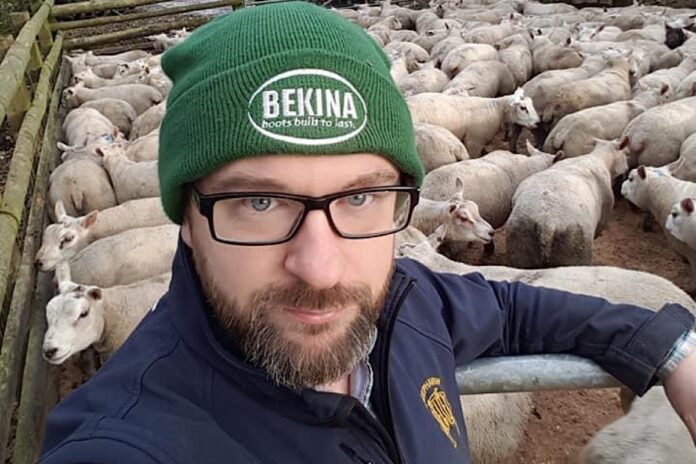 In this week’s sheep farming segment, That’s Farming speaks to Declan Robinson. He discusses continuing his late father’s sheep enterprise, sheepherding sheep in England, his achievements, purchasing rams overseas and his outlook on the future of sheep farming.

Sheep farmer Declan Robinson, from Donegal, claims he broke the Irish record price within the Beltex breed by selling a ewe for €2,200 at the 2021 Belgian Beltex Breeder’s Society of Ireland’s in-lamb premier sale.

The Robinson family is a well-known name in the pedigree sheep breeding business, with the next generation, Declan, continuing in his late father, Tommy’s, footsteps.

“My father judged local shows around his home. I have been breeding sheep since I was able to walk,” he told That’s Farming.

“Sheep farming is either in the blood or not in the blood. It is one of them things’ it was a disease that was carried on, and it could not be cured.”

He runs a flock comprising 15 pedigree Beltex ewes and 50 commercial Suffolk-cross ewes across 34-acres (which is a mixture of owned and leased land).

Declan decided to stay at home on the farm after leaving secondary school. In 2016, he became a part-time freelance shepherd in England and helps manage the Whiteley Hey flock during lambing.

He met farm owner, Paul Sleator, through his involvement in Beltex sheep and has spent the last six lambing seasons with him on his farm.

In 2014, Declan established the Sheephaven flock from females he purchased at the Belgian Beltex Breeder’s Society of Ireland in-lamb sale at Tullamore Mart from the Quarrymount flock and from an imported in-lamb ewe from a Scottish sale from the Brickrowe flock.

Also, Declan bred Beltex ewe lamb, Sheephaven Anitasia, which he sold to Francis Lyons, who won the All-Ireland champion for him the following year.

“If I can breed a ram good enough for a pedigree breeder, that is a bonus because you are guaranteed extra.” 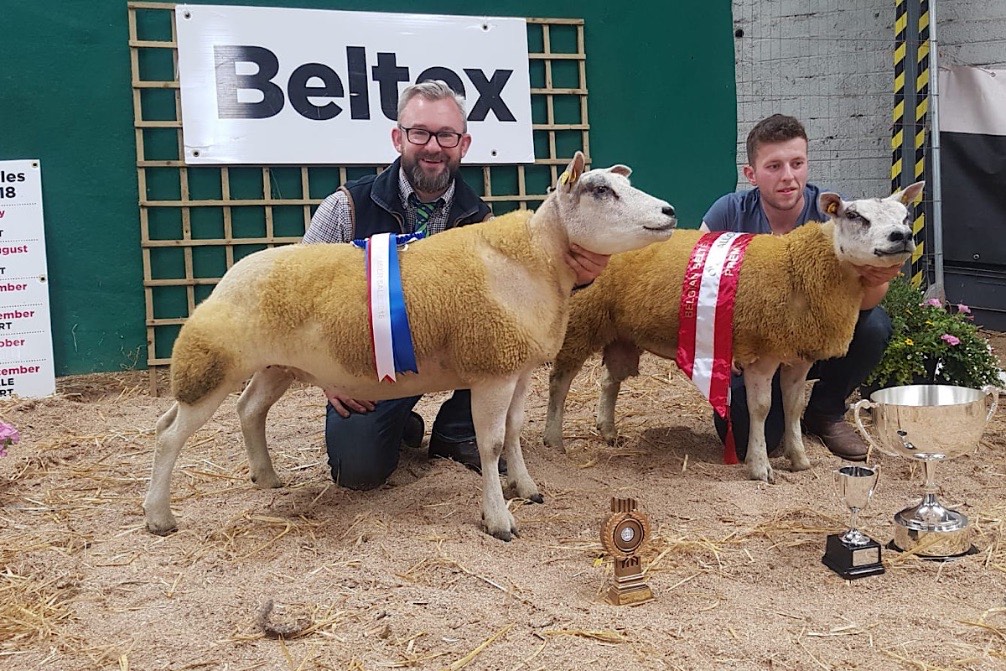 He AIs and completes ET work on his pedigree Beltex ewes by using Glenpark Galileo and Beltex-Charollais-cross rams with his recipient commercial ewes.

“I complete a flush in early February and mid-March with pedigree Beltex ewes. Then, the commercials are put in-lamb using my own Beltex ram.”

Declan purchased Glenpark Galileo ET jointly with Michael and Niamh Oliver of the Lisnacrann flock in Dungannon at the Beltex Sheep Society sale.

According to Declan, AB Europe flushes seven ewes with semen from Buckles Fizzy Pop, with an 80% hold rate.

In addition, he also shares Buckles Fizzy Pop with Matthew Burleigh, which they bought privately at the Carlisle premier sale in 2021 from Mssr Buckles.

He lambs his commercial and pedigree sheep from March 20th, which enables him to graze his flock during suitable grass conditions post-lambing, have progeny ready for sales and lower feed costs.

Declan uses a Dorset teaser ram with his commercial Beltex-cross-Charollais ewes for three weeks before the ram goes out and says that all his ewes tip on the first cycle.

The Donegal-based farmer lambs his flock in a 5-bay-double lambing shed.

He places the ewes in sheep pens before lambing and has a selection of pens for lambs and ewes post-lambing.

Declan brings all his pedigree sheep to yearlings and sells some females at the Belgian Beltex Breeders’ Society of Ireland in-lamb ewe and ewe lamb sale in Tullamore Mart the following December. On the other hand, he  sells his rams on-farm or at society sales.

He sells his commercial lambs on-farm with sheep farmers acquiring a ram or “wishing to breed show lambs from ewe lambs”.

“My name is well-established through my show and sale success down through the years, and every year, I have continued customers. The family name has been in sheep breeding for generations.”

“It was a very emotional day for me because my father, Tommy, would have been the first person I rang that morning to tell him how I got on.”

“He would have been a very proud man to think we bred both the supreme and reserve champion in the premier sale.”

“Beltex is becoming a popular sheep breed. They have the best kill-out, and factories look forward when they see Beltex lambs coming on the hook. So, there is a good demand for them in the export market.”

Declan plans to offer four recipient ewes with ewe lambs at foot from his “top” breeding ewes at the Spring Superstars Sale on Saturday, May 28th, 2022, at Ballybofey and Stranorlar Co-op Livestock Mart.

“For anyone thinking about getting into Beltex sheep, I will have some of the best progeny I ever bred for sale. I look forward to meeting a few new sheep breeders coming along.”

The Donegal sheep farmer has a strict culling policy and sells his ewes to Ballybofey and Stranorlar Co-op Livestock Mart or Milford Co-operative Livestock Mart.

“If factory lamb prices stay up as well as the cull ewe price, the outlook is going to be good enough for breeding sheep. I always say if you have no ram, you will have no lambs.” 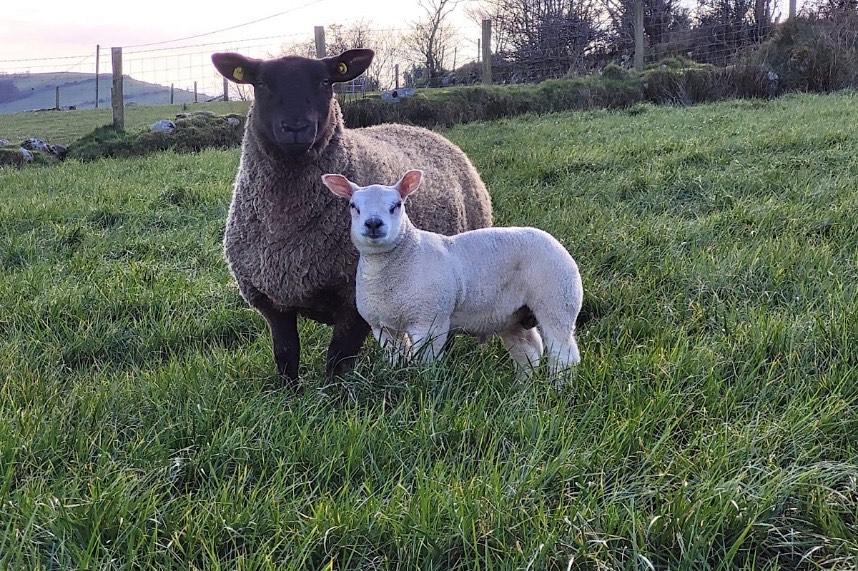 He aims to win the All-Ireland Beltex championship in Athlone and Tullamore Show this year or in the upcoming years.

“I have bred a sheep that did win the All-Ireland Beltex sheep in Athlone Agricultural Show, but I already sold it before the show.”

Declan believes by having knowledge of the breed of sheep and by breeding a sheep that you know, you will have “success.”

“My advice is to buy a good tight-skinned sheep that looks like the Beltex. You need to look at exactly what the breed is, follow the breed and then you know exactly what you can buy.”

Declan plans to keep moving with the times and has no plans to expand sheep numbers due to the farm being a small enterprise. He intends to stay a maximum of 20 pedigree ewes and 50 commercial ewes.

The Belgian Beltex Breeder’s Society of Ireland member plans to purchase a ram annually and said, “if the right Beltex ewe comes in front of him that catches his eye, he will try and buy it”.

In addition, Declan plans to continue reseeding, including direct reseeding land every few years to allocate new grass for his sheep.

“In the next five years, I would like to try to stay on top of my game and continue selling 20-30 rams and 20-30 females every year. I should be able to make sheep farming work between here and England.”

“I do not think I could make it work full-time for the small farm that I have.”

“However, there is going to be a good future in sheep farming because the numbers are scarce worldwide, and we have the numbers for export,” the sheep farmer concluded.