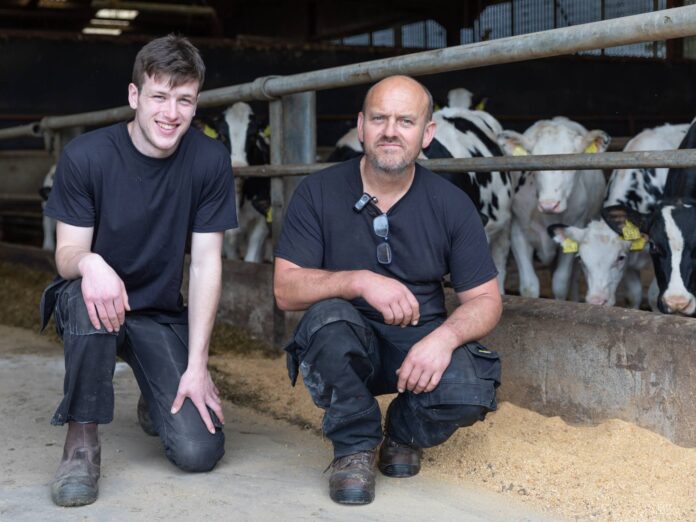 Attention to detail is key to successful heifer rearing in the Wilson’s thriving dairy enterprise, which is also home to pigs and poultry, in Co. Tyrone.

The College of Agriculture Food and Rural Enterprise (CAFRE) Technology Demonstration Farm (TDF) – which Rex and his sons, Jack, and James run, aims to demonstrate best practice in the rearing of dairy heifer replacements.

However, Wilsons’ attention to detail in all aspects of the rearing process is “paying dividends” for their dairy business.

He pointed out that heifers meet all the critical weight targets, calve at under 2 years old, and their performance in the milking herd has been “impressive” in recent years.

He pointed out that average first-lactation heifers are yielding approximately 8,500 litres.

Jack, a recent CAFRE graduate with a BSc (Hons) Degree in Agricultural Technology, has taken a lead role in the heifer rearing enterprise.

This stems from Rex’s desire to give his sons key areas of responsibility and encourage them to make a positive contribution to the management of the farm business.

To maximise performance, Jack, in partnership with his Parklands senior vet Eamon Donnelly, reviewed all aspects of his heifer rearing programme, including health, nutrition, and housing.

Following the review, the Wilsons have identified areas where they can make improvements.

Furthermore, they have created practical health protocols which document critical management at each stage of the production process.

In Jack’s view, good hygiene was an area, in particular, where they have focused “a lot of attention with really positive benefits”.

He explained that “In addition, important information relevant to the heifers and, in particular, the young calves is documented in a WhatsApp group which was created to keep everyone on the farm informed of events such as calving management, nutrition, health and veterinary treatments.”

Gavin of CAFRE added that “Detailed costings for all aspects of the Wilsons heifer rearing is showing it has cost approximately £1500/heifer calved into the herd.”

“This includes all the variable costs such as milk replacer, concentrates, veterinary and grassland with an allowance made for a share of the farm’s overhead costs. This will have increased now based on the recent rise in input costs.”

Furthermore, a replacement rate of 23% and an average age at first calving of 23.5 months on this farm requires at least 50 heifers per year entering the milking herd to maintain numbers.

According to Gavin, research has shown that calving heifers at 24 months or earlier is optimum for economic performance.

Most dairy farmers are now well aware of how the management of their replacement heifers, especially in early life, can have a significant impact on subsequent lifetime performance.

On this farm, “preparations commence even before the calves are born by ensuring correct dry cow nutrition, the birth of a healthy calf and an adequate supply of good quality colostrum”.

They vaccinate cows and heifers 6 to 8 weeks before calving to protect the newborn calf from the main scour bugs.

Jack believes that the extra effort to ensure good colostrum management has been an area where the family has seen the “greatest” benefits.

They test all colostrum before feeding using a BRIX refractometer with readings consistently between 23– 30.

Calves receive up to 4 litres in the first feed and will receive its mother’s milk for the first 3-4 feeds before being gradually changed over onto Provimilk milk replacer.

During the milk feeding phase, they feed heifers for “accelerated growth”, with each receiving the following:

They weigh all heifers at birth and at regular intervals throughout the rearing period to closely monitor performance.

The following are their key critical weight targets:

These targets require an average daily liveweight gain from birth to calving of at least 0.80kg/head/day.

To achieve this, they make every effort to minimise nutritional or health-related setbacks.