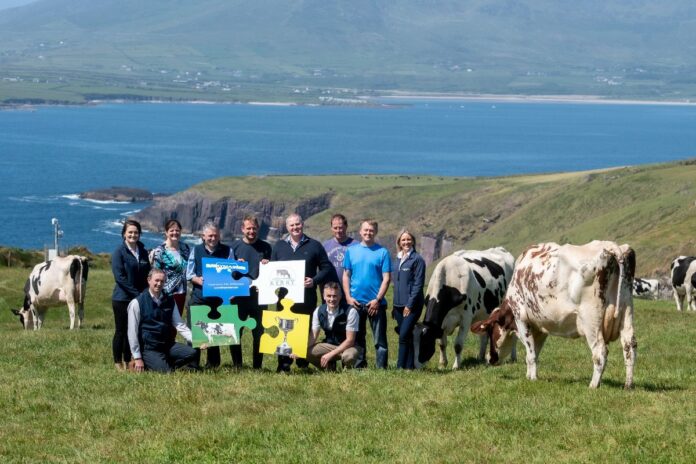 New cup up for grabs in Holstein Friesian competition

A new cup is up for grabs as part of this year’s Kerry Holstein Friesian Breeders’ Annual Herds Competition.

Members of the Kerry Holstein Friesian Breeders club, along with headline sponsor, Dairymaster, travelled to Ronan Siochru’s farm in Dingle to officially launch their 2022 competition.

Ronan, along with William Horgan and Maurice Harty, will represent their county in the national herds competition this year.

There are two categories, spring, and autumn, which are subdivided into senior, intermediate, junior, and new entrants’ sections with 1st, 2nd and 3rd prizes in each category. Prizes include:

The competition is open to pedigree herds, and all entries are to be sent to Geraldine Harty, herds competition coordinator, Ballylongane, Ballyheigue, Co. Kerry. Judging will commence from June 20th, 2022.

The club’s field evenings will take place at John and Niall Mason’s farm on June 17th and John Galvin’s farm on July 31st, with the awards ceremony announced at a later date.

John O’ Callaghan will judge the senior and intermediate section, while Ursula Forest will take this role for the junior section, and Donal Coppinger is over the new entrants and Friesian section.

“This year, we even have a new trophy up for grabs. Big thanks to Dairymaster, who have continued to sponsor and support us.

“This is another great addition and demonstrates the progression and dedication of the club.”

“We are delighted to be here for the launch of this year’s competition. It is great to see the club progress so much over the years.”

“We in Dairymaster help farmers progress every day using technology, energy-efficient and sustainable products. By us all working together, we can accomplish great things.”