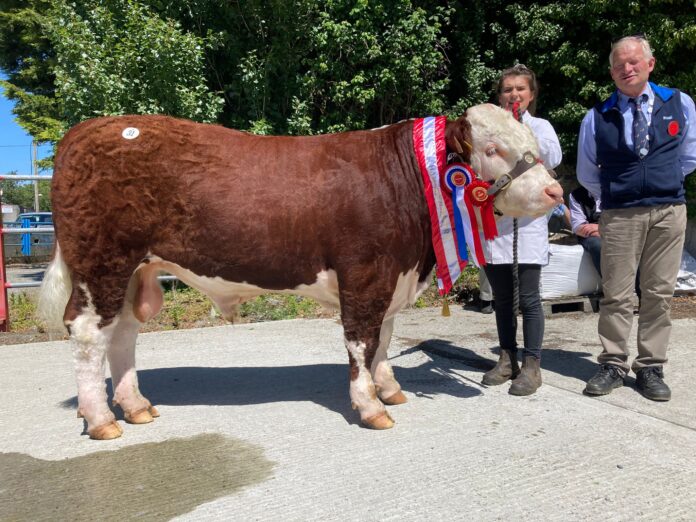 Saturday, May 28th, 2022, rounded off what has been a successful trading season for the Irish Hereford Breed Society and its breeders.

The society held its final Hereford spring show and sale of 2022 at Nenagh Mart, with prices to €3,900.

A spokesperson for the society noted: “With home sales being strong throughout the spring and demand exceeding supply, breeders exhibited only 10 of the 31 bulls for sale on the day.”

Bred by Phil and Catherine Smyth, Co Meath, the Nenagh sale champion came in the form of Ardmulchan Supreme.

Mr Adrian Bateman tapped out this March-born bull by Ballinveney Tiger and bred from a Yarram Pompeii grand-dam.

This entry is a half-brother to Ardmulchan Sydney, who changed hands for €3,000 at the end of the Nenagh April sale.

At last Saturday’s sale, a Kilkenny breeder forked out €3,900 for Ardmulchan Supreme. The buyer received €200 from Irish Hereford Prime, as one of the purchasers to acquire a bull that hit €2800 and over during this sale.

The reserve champion earned the second top price of the day of €3,300, and the same Kilkenny breeder acquired this lot.

Carrick Hector, bred by Philip Lynch, Cavan, is by Cill Cormaic Orson and bred from a Grianan Firecracker grand-dam.

There was success also for Glaslough Herefords, property of Nigel Heatrick in County Monaghan.

A Galway farmer snapped up Nigel’s first lot into the ring, Glaslough Warrior. The €3,100 entry is a Gageboro Eugenic grandson and bred from a Ballyaville Ger dam.

The Heatrick’s second and final lot into the ring, Glaslough Wellington, also moved onto greener pastures when he found a new owner at €2800. This bull is by Ballyaville Ger and bred from Glaslough New Look.

Of the three bulls catalogued for sale from Ryanstown Herefords, only one was left for sale following good home trade for the herd.

Ryanstown Copper, bred by Sean Ryan from Nenagh, made €3100 and now heads to a fellow Tipperary farmer. Copper is by Balleen Generator and bred from a Gageboro Eugenic grand-dam.

There was also one heifer exhibited and sold on the day; Boyanna Sheila, sired by Cill Cormaic Kasper.

Bred from a Bowmont Storm grand-dam, Pat Lynch of Rossdelia Herefords, Clare sold her to a Tipperary breeder.

- Advertisement -
Previous article
New cup up for grabs in Holstein Friesian competition
Next article
‘Breeding is a gamble, and you never know where a good dog comes from’