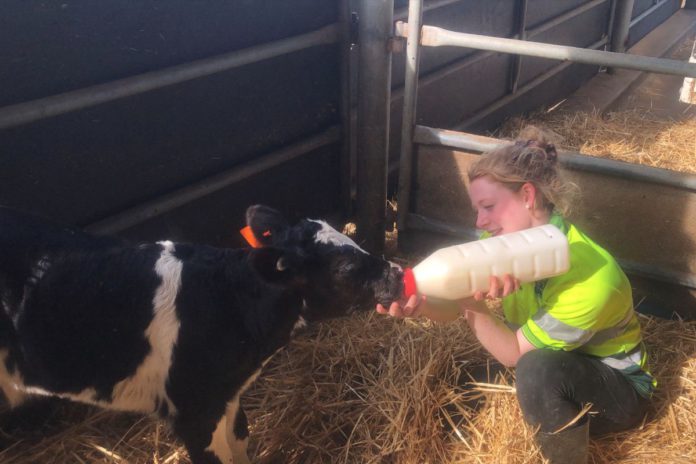 As part of our Farming Overseas segment, That’s Farming speaks to Jemma Wilson, a third-year BSc science in agriculture and environmental management student at Mountbellew/GMIT Galway, about dairy farming in Australia.

When Ireland was placed under its first Covid-19 national lockdown last year, Jemma Wilson was “living the dream”, milking over 10,000 cows in Australia.

The Killykeen, County Cavan native, who lives on a 50-cow dairy farm, departed Irish shores in January 2020 as part of her second-year college placement.

The farm operates a 100% AI system and calves all-year-round, with Holstein Friesians, Jerseys, Norwegians and cross-breds being their preferred cow-types. The farm owners in question keep all heifers as replacements, calving these at 24-months, and sell 99% of bull calves.

“For my first-day milking, I was on an 80-unit rotary with the biggest cows I have ever seen in my life, in 47 degrees, heat. It was a real shock to the system going from a 6-unit with 50 cows to this.”

“There were two parlours that ran 24/7 and stopped twice-a-day for 40 minutes for washing. The first was a 50-aside herringbone rapid exit, and the second was an 80-unit rotary parlour. Besides, there were also constructing a 40-unit rotary for fresh milkers when I was there.”

After a fortnight, Wilson moved to form part of its animal health/calving team and undertook occasional milkings. She was responsible for calving cows and covered night shifts from 6 pm to 6 am.

“They use Holstein for big calves; the bigger, the better was the saying over there. A lot of the calves had to be pulled due to size.”

“Every half hour, I had to complete a walk-through to pull cows out of the shed that were calving. Furthermore, I had to move them onto a sand pad to make it easier to assist if needed.”

“Firstly, calves are taken from the cow straight away. Then they are washed, dried, nasal sprayed, tagged, paperwork is filled out, and they are tube-fed colostrum. The cow is always brought into the crush after calving to be examined.”

“First, she is checked for any tears or another calf. Then, she is injected with oxy to help her clean out quicker. If a cow shows any signs of illness, she is treated on the spot too.”

“The cow is milked, and her colostrum is graded using a colostrum meter and recorded before being placed into colostrum bags to be pasteurised and frozen.”

“Also, at night, you would be the go-to person for ‘down cows’ or any sick cow all over the farm. It was our responsibility to collect cows and bring them to the sickbay and treat them, unless, in severe cases, where we enlisted a vet’s help.”

According to Wilson, a specialist team oversees the farm’s breeding programme.

Cows are heat detected and are then drafted from the parlour to be AI’d. They could be given between 1-3 straws and, if successful, will return to assigned sheds.

“Also, while I was there, I got to experience a lot of embryo births where the embryo is placed into heifers. It is a costly process but seemed to be working as 8/10 heifers had heifer calves.”

“All cows are housed full-time, and their feeding quality is excellent. They are very passionate about good quality feeding and feed quantities. There is a specialist in America over animal feeding there, who is constantly observing their feed.”

“I have never seen infrastructure in my life like it. I never knew sheds that size existed. The smaller sheds were about 30-40 bays long, and you could multiply that by two for the longer sheds.”

According to Wilson, the farm owners bed all cows with sand on cubicles and deploy a flush system to clean passageways.

Every single shed has feed barriers with headlocks from one end to the other. Calves are bedded with straw in isolation units before moving to an automatic feeder unit.

“Recently, they constructed new sheds that are fully enclosed but have fan ventilation airflow. The sheds are ventilated very well and are maintained at the same temperature at all times.”

“The way they operate this farm inspired me when returning to my farm. I saw things I never knew you could do or even existed on that size or scale.” Jemma concluded.

Are you dairy farming in Australia? To share your story, email – [email protected].