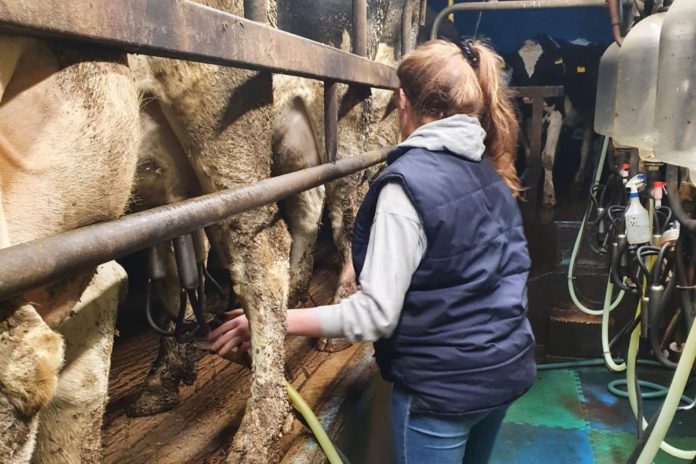 “On Thursday, October 18th, 2012, my father, Trevor Morrow, lost his battle with his mental health. He was found at our family home after failing to turn up to work that morning.”

“My whole world started to crumble, and I felt there was no way I could ever deal. How was a 13-year-old going to live without her father?”

“My younger brother was only ten, and my younger sister was only three. How could he leave the three of us and our poor mother alone? This was a man who told us jokes before we went to school the morning he passed.”

“My father’s many struggles were never exposed to us children, and we later only found out during his wake. He was in serious financial difficulty with a drinking problem on top.”

Those are the heartfelt words of dairy farmer and ag student, Megan Morrow (21), who has a desire to be a role model for anyone affected by suicide, either within family or friend groups. 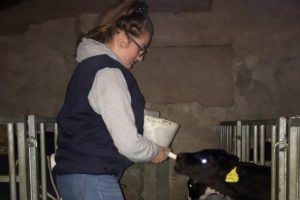 Although she has always been interested in farming, it became the Ballinamallard, Co. Fermanagh’s natives escape when her father passed away.

“The following weeks after my father’s death, the cattle began to come into the sheds for the winter. I have always loved the whole process of putting the various batches of cattle into different sheds and what each batch got for their diet.”

Their main calving time fell around December, a period which brought excitement, joy and a challenge for the family.  “I became distracted. I was not sitting in the house, crying my eyes out, looking at photos of my father or praying for him to walk in.”

She was busy, bringing new life into the world, looking after the other cattle and attending any medical needs. “I was escaping my grief. My passion became my therapy, and I think that is why I got more passionate about dairy farming.

“Dairy farming has always been a passion, but it also became my escape, following my father’s suicide’

“It helped me through my darker days. It brought me through days I did not want to go through. When I would be lying in bed crying, I would then have to get up and feed the calves. They needed looking after no matter what state I was in.”

“Life gets easier; you learn to deal with your grief with whatever way suits best. The thought that they are at peace now also helps me when I begin to think of my father.” 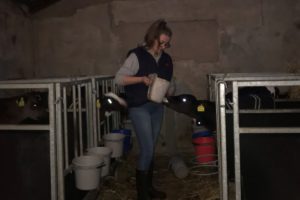 Megan assists with the running of the family’s 65-cow dairy farm whilst studying and juggling other roles. The Morrows have plans to expand in the coming years with their homebred replacements.

She is currently on her placement year as part of her Agriculture with Animal Science BSc (Honours) degree at Harper Adams University.

Furthermore, the 21-year-old should be on placement at Davidsons Feeds, Shotts as a dairy nutritionist and consultant; however, this has changed due to Covid-19 restrictions.

In addition to working on the family farm, she also has two milking jobs for local farmers. The 21-year-old is a bookie for TB testing with Erne Veterinary, a role she secured before university.

“Growing up, I lived on our out farm, about a mile from the home farm, where the young stock and dry stock were reared, with my parents and younger brother and sister.”

“I had a wonderful childhood on the farm, and I was out every day helping. This quickly grew into a passion and a certain career as a dairy nutritionist.” 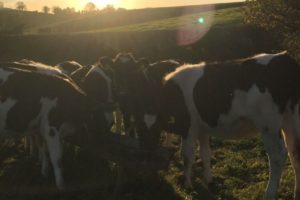 “With this career as my goal, I met with various challenges, and confidence knocks from some teachers and career advisors during my time at an all-girls grammar school.”

“One of the career advisors was a middle-aged male. He sat in front of me and began to laugh when I said I wanted to study agriculture with animal science to become a nutritionist.”

“He said: ‘Megan, you are wasting these high grades and your potential, on a lifetime of cows and telling old men what to feed their cows, you won’t become successful following this idea….what about becoming a midwife?’.”

“I left the room in tears and started to doubt myself and my career choice. However, that career advisor did not understand what dairy farming meant to me due to a tragedy, years previous.” 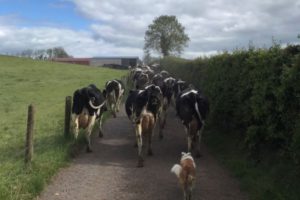 The 21-year-old also wishes to be a role model for young females who want to pursue a career in agriculture.

“You will hear it at last once in your life that you are ‘too good’, ‘you are wasted at cows’ or ‘farming is not a job for a woman’.”

“I have also been told ‘no farmer is going to listen to a woman to tell him how his cows should be fed’.”

“I have got most insults or sly comments and still to this day, I get them. However, always remember farming is an equal world., male and female. No gender more superior than the other.”

“Farming is a passion, a lifestyle, a business that both genders can do well and succeed in, no matter anyone’s opinions,” Megan concluded.

- Advertisement -
Previous article
‘Sheep farmers are that bit older and not as robust when it comes to trading online’
Next article
Dry cows reach €2,080 at Ballymote Mart