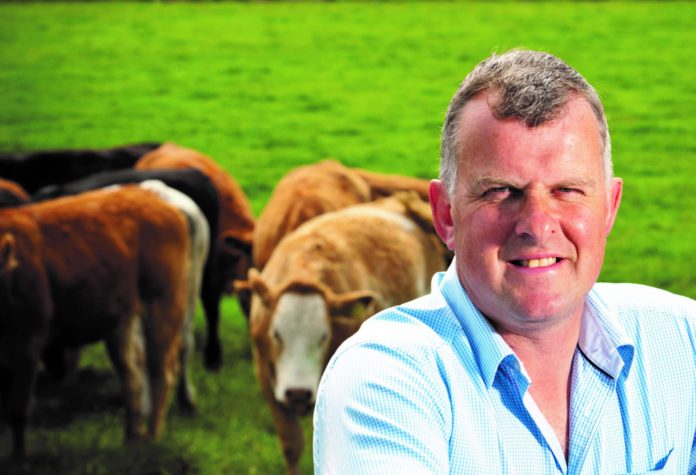 VIDEO: Calf scour: How to wipe out a costly problem

“Clinical calf scour affects about 14 per cent of the UK herd,” says Dr Barragry, a Professor in Pharmacology and Therapeutics.

“In other words, around one in seven calves will have scour and perhaps die from it – the mortality is very high.”

“Every single calf with scour could infect around five others, so there can be a cascade effect right through the herd from a single calf.”

“If the environmental contamination is high because of E. coli or rotavirus, for example, it is highly unlikely that just one calf will be affected.”

Surveys have shown that around 80 per cent of farmers experienced calf scour in their herds in 2019, and 52 per cent had deaths as a result.

Yet, despite publicity around the importance of early colostrum intake, research has shown that only around a third of calves are given adequate colostrum at the right time.

“So, you have got two issues,” Dr Barragry explains. “Immunologically compromised calves and high environmental contamination, with cases then fanning out across the herd.”

Scour is known to have a major impact on both welfare and productivity, he adds.

“Sub-clinical calves suffer dehydration and pain with a high temperature, so there is an animal welfare issue, as well as a very negative long-term effect on productivity.

“It has also been shown that calves that receive antibiotics pre-weaning never do quite as well as those that do not.  Secondly, calf scour has a relationship with pneumonia.”

Calves with scour appear to be around 20 times more likely to get pneumonia, and if they get it, it stunts them for good because the lungs never fully recover.

“This is very widespread and is something that has to be prevented rather than treated – once you get to the treatment stage the damage is already done.” 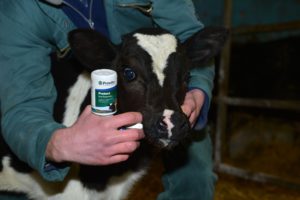 Provita is a biotechnology animal health innovator involved in the development, manufacture, marketing, and distribution of natural and sustainable animal health solutions globally.

Provita Protect is a “totally unique” product, in the sense that it is the only veterinary probiotic to be authorised and licensed by the VMD for calf scour.

This product is an oral supplement that provides high-level multi-strain probiotic bacteria.

Dr Barragry explains: “Within the intestine, there are two categories of microorganism – beneficial microorganisms known as commensals and disease-causing pathogens.”

“The more commensals there are the better because they displace the pathogens and they also neutralise the toxins of the pathogens.”

Provita Protect infuses commensal bacteria into the gut to populate it with beneficial bacteria and “essentially crowd out the pathogens”.

It is now known that a healthy gut, or microbiome, not only governs gut health, it also governs immunity. “It seems to be immune signalling from the commensals of the gut to the other body compartments,” Dr Barragry explains.

In trials, Provita Protect has been shown to lead to an 83 per cent reduction in scour incidence. “Curiously, we also noticed far less respiratory disease, which declined by 50 per cent,” he adds.

“Science has now shown that there is what is called a ‘cross-talk’ between the gut, the lungs and immunity. This research has far-reaching ramifications for calf health.”

As well as reducing scour and pneumonia, trials of the product revealed an increase in body weight of around 10 per cent up to weaning.

“What’s interesting is that even in young calves that receive adequate colostrum, that graph of immunity depletes over a few days and at that stage, Provita Protect kicks in, so it covers the immunity void in the calf shortly after birth.”

Given prophylactically, whether there is a history of calf scour on the farm or not, “it is a very good insurance product to keep calves immunologically healthy and resistant to scour or infection,” he adds. 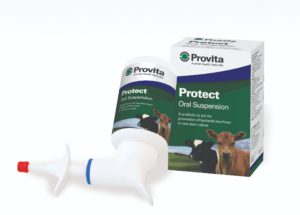 It is difficult to calculate the cost of scour to farmers, but some estimates suggest around £80 per calf, though this can go into the hundreds if there is mortality.

There are various ways to tackle the issue on-farm, depending on the cause – whether it is rotavirus, E. coli or cryptosporidiosis, the latter of which is now also very common.

“Provita Protect will help to resist all of these,” Dr Barragry says.

“It’s advisable to use maternal vaccines for rotavirus, E. coli and coronaviruses in late pregnancy but calf protection is dependent upon taking it out of the colostrum.

“Adequate colostrum feeding of 3-4 litres within three hours or so is hugely important but immunity from colostrum is relatively short-lived and they’ve got to be in a clean environment with regular clinical examination.”

Dr Barragry adds: “We are now living in an era of antibiotic pushback. There are new regulations coming from the EU, which may or may not apply in Britain of course, but indiscriminate use of antibiotics in calves is a no-no, and preventative use is not to be encouraged either.”

“So, waiting until scour has occurred is too late and there may be a resistance problem anyway. The advice is to get in early with a healthy holistic product like a probiotic instead to help the animal help itself,” Dr Barragry concludes.

Provita, which manufactures Protect, has the world’s only GMP+ licensed facility for the production of veterinary probiotic medicine products.

He manages a herd of Limousin suckler cows mated to British Blue and Limousin sires, which gives him the option of finishing animals for beef or selling them as stores and replacement suckler heifers.

The Down native has also incorporated Angus bloodlines into the herd due to the growing commercial demand for this particular type of crossbred animal.

Sam’s impressive attention to every aspect of his business – using accurate data costs and benchmarking in order to guide the development of his production system and invest in inputs – is key to his success. Giving every newborn calf the best possible start to life is a top priority for Sam.

“The calves receive Provita Protect as soon as they are born. Experience with the product has confirmed that it significantly reduces the incidences of scour.”

“In the event of any calf coming down with the problem, we have found that it is much easier cured.”

“I would heartily recommend its use to any dairy or suckler herd owner. We have not had any serious cases of scour in nine years; it’s one less stress during calving,”  he added.

Provita also manufactures Prolyte Extra. It differs from most other fluid and electrolyte products on the market in two important respects.

It contains Glycine and Ascorbic acid. The absorption of glucose and sodium from the gut is known to be enhanced and maximized when glycine is present.

The overall absorptive process of electrolytes and water is uniquely enhanced in Prolyte Extra by the presence of glycine, which acts as a pump to maximise and expedite this absorption. 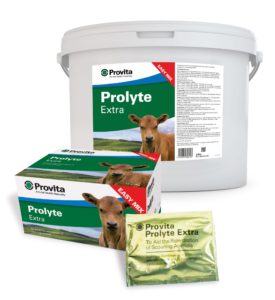 This reduces the risk of hypoglycaemia (low sugar) and acidosis which are the predominant reasons for deaths in scouring calves. Ascorbic acid is an immunostimulant, antioxidant, and a protectant against scour in calves. Calves are quite deficient in vitamin C (ascorbic acid) and hence, an extra supply in Prolyte Extra helps immunity.

Ascorbic acid stimulates antibody production and acts to supplement the protective effects of colostrum. In addition, it maintains the defensive structure of the gut lining, hence minimizing the risk of “leaky gut” syndrome.

It protects calves against infections and has a potent anti-inflammatory and antioxidant effect which is vital for the young calf.  Prolyte Extra also contains beneficial bacteria.