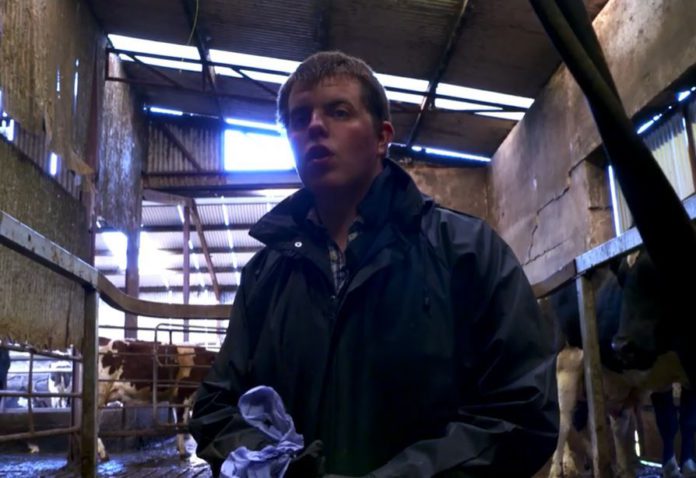 It’s April 2020 for the Rare Breed farmers and as the coronavirus pandemic continues, we see how farmers are coping with restrictions tonight (Tuesday, February 2nd) for episode four of ‘RARE BREED – A Farming Year’ on UTV.

We see how our farmers protect new life in the spring, be that in plant or animal form. A familiar face from series seven pops up with the Preston family, and despite Covid-19, the farming cycle continues with cows being put out to pasture after a long winter indoors.

In April, the McGowan team is busy with fieldwork at their Co. Down vegetable farm. They are doing essential work to protect baby vegetables from weeds, birds and rabbits.

They have invested heavily in miles of fabric which is draped over the crops to stop critters getting in. An added bonus is that it reduces the need for harmful insecticides.

It’s physical work carrying and dragging the material and when the wind gets up, it can be quite a challenge. But as Adrian says, ‘if everyone knows what they’re doing it make is so much easier.”

Adrian explains the challenges associated with vegetable farming being so labour intensive and seasonal workers not being able to fly in from Eastern Europe.  He is, however, very happy with the local labour which is ‘working well’, commenting that “youthful energy is a wonderful thing!”

Near Randalstown in Antrim, James Alexander has new helpers joining the lambing team in the form of daughters Mya and Alesha.

With 750 ewes, it’s all hands-on deck, and James is delighted with how they are doing.  The girls are a dab hand at delivering the lambs, and administering the iodine spray and antibiotics for the new-borns.

With safety constantly at the front of James’s mind, he points out that the cows are too big and dangerous for the girls to be involved with yet.

James talks about the quality of the lamb he produces compared to foreign imports on shelves and laments, “I wish our own folk would buy our own produce.”  With near-perfect weather the whole family then help with bringing the lambs out to the fields with their mothers.

Northern Ireland’s marts perform a vital role in the cycle of the agricultural sector, helping bring animals to buyers, and then on into the food chain.

Near Gortin, Tyrone, like all other auctioneers, Richard Beattie (who appeared in series seven with wife Selina) was under pressure to figure out a safe way forward.

He comments, “There’s an eeriness in the town.”  The marts turned to online sales and changing how they worked on the ground. Richard has invested heavily in cameras and computers to ensure it all works.

Kenny and Zara Preston bring some stock to the mart in this episode of Rare Breed – A Farming Year and talk about how the family is coping with all the rules and restrictions, especially younger daughter Leah.

Near Tempo in Fermanagh, April is one of Andrew Little’s favourite months. His dairy cows, like many other herds, spend the colder, wetter months living indoors.

Traditionally, April is when the fields are dry enough for the cattle to move outside. Andrew and his family really enjoy watching the animals return to the fields to enjoy the grass and the sun on their backs.

Andrew lights up when this is all happening laughing to himself, “there’s so much to learn, maybe I’m cow mad? You’ve good company too, cows don’t talk back!”

The two families are self-isolating as a unit and shopping is done for the two households together.

Farming still has to go on, despite Covid-19 and Margaret hasn’t seen her own family in weeks, not wanting to risk taking any illness down to them, nor bring anything back. She says, “It’s just about being sensible.”  She can’t wait to try her homegrown veg once it’s ready to eat.

- Advertisement -
Previous article
Ag minister to step down
Next article
Heifers sell to €3,700 at Carnew Mart