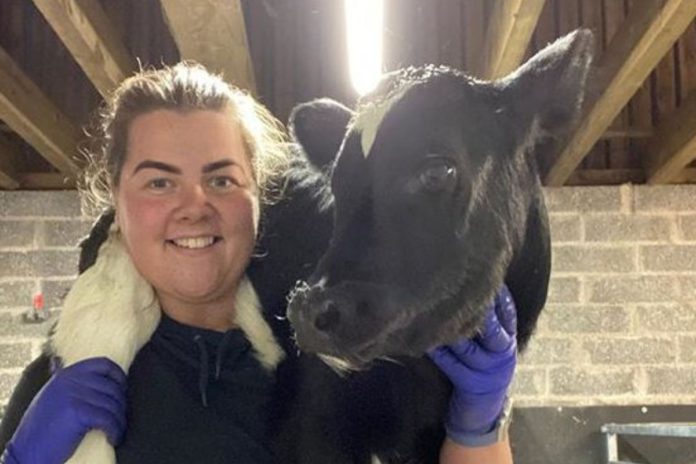 She farms in Tempo, Co. Fermanagh alongside her husband, Andrew, and his father, Raymond, who purchased the holding in 1979.

Raymond began farming with 16 cows in an 8-cow byre, and since then, the farm has grown from strength to strength over the last four decades.

In 2017, a 30-cow house was constructed, and the herd increased to 100 cows, while two old silos have been converted to cubicles in the last two years.

“We increased the number of cows as I was working full-time as a nurse and Andrew was working part-time. We both wanted to come home to farm full-time, and we had to expand to do so.” Margaret explained to Catherina Cunnane, editor of That’s Farming. 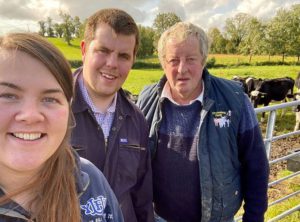 They are milking mostly British Friesian/Holstein-cross cows, with a number of Fleckviehs on over 200-acres of mainly rented ground.

“We have selected this breed as it suits our farming system. We are on fairly heavy ground so we may have to house the high yielders during parts of the summer. A grass-based bred cow would not work.”

“This breed of cow will also have a fairly good beef-bred calf to sell off which we currently run a Shorthorn at the moment to sweep up the cows.”

70% of cows calf from September to December, with the remainder in spring. “We like to calve this time of year as with slurry and silage going on through the summer months, we don’t have the time to pay as much attention to detail to our calf-rearing capabilities.”

“I do think we have increased our milk from forage. With fresh grass available in the spring and most of our cows settled back in-calf, we do not tend to feed concentrates at high levels during this period.”

From November 20th to January 1st, the herd is AI’d mainly to sexed Friesian/Holstein sires before a beef bull is introduced for a three-week period. “We AI from January 1st to February 14th using Friesian sires and then the bull does the rest.” 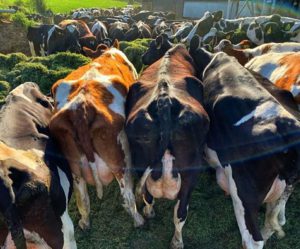 The trio hopes to improve these figures, with a view to achieving 8,500 litres per cow, along with a higher solid output.

“We have a 6-point swing-over parlour so milking is taking over 3 hours when all cows are in-milk. This is currently being extended to an 8-unit double-up parlour so, hopefully, this will help.”

“We are lucky that our shed is designed so that there is a feeding space for every animal at any time and we can batch them up. We split cows into high/low-yielders groups, and give the high-yielders a mid-day feed of a blend on top of silage.” 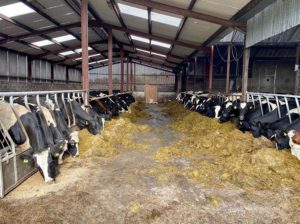 In recent years, they have started rearing their own replacements, a practice which the second-generation farmer described as “a good learning curve”.

“Previously, we ran a flying herd but with increased conacre, we now have room to keep our own. Personally, I think with conacre at a respectable price, it will hopefully be cheaper to rear our own.”

They usually sell beef-bred calves privately from the farm or at the mart at approximately 6-8 weeks. “A bull is a great use to help keep the calving pattern tightened up for the upcoming year.”

“We have taken the decision this year to rear a few bulls straight to finish just to see if it will help cashflow in the spring.”

“We pick up heats by eye or tail paint, but I think a stand-alone heat detection system will be of benefit in the future, but it is just not for us yet.” 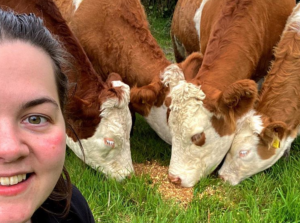 Cows normally graze from April 20th, until the end of September. “Our plan is to have them housed at night but if the grass and weather are there, they will get out at night.”

“We are heavily stocked on our grazing platform with 120 cows on 60-acres so you have to work with what you have.”

“Ideally, we would like to have a dual-purpose cow so that if we hit a wet year and cows have to be kept in, it will not be the end of the world.”

Drumderg Farm cuts over 110-acres of land twice for silage, while in the region of 60-acres are harvested for third-cut silage.

They aim to cut silage on May 20th, July 12th and when weather conditions allow in September. “We mow with an ordinary 10 ft mower and lift with a JF harvester so it can be a struggle at times to increase dry matter, if we get 25% DM or over, we are happy.” 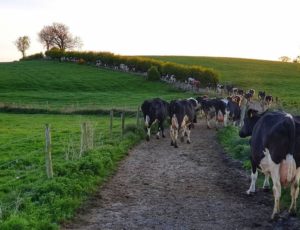 Over the past two decades, expansion mode has been in full swing on the Little’s holding, growing from 30 cows to 120 in this period.

Margaret believes that the family need to “get off the expansion wheel for a while,” something she believes may not be an easy task.

“To be honest, it is going to be difficult not to want to expand because it is like an addiction, especially for Andrew. We hope to get to a position whereby we can sell surplus heifers.”

“I think feed efficiency on our farm could improve a lot more. Genetics need to improve to try to get more use out of what we have.”

“We are interested in hopefully introducing new technology onto our farm when the time is right so we may just wait and see what time brings,” Margaret concluded.