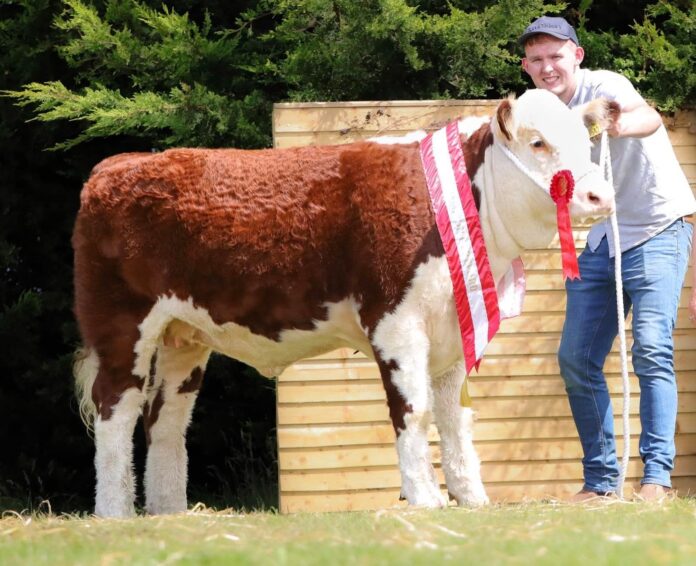 The programme strives to encourage young people to rear calves on their home farms with the added aim of raising money for charity.

In spring 2022, Irish Hereford Prime allocated over €5,500 to five of the Hereford Society branches to buy and maintain dairy-bred Hereford bull calves by young Hereford breeders appointed by their local branches.

Each calf must be:

The real journey began in March and April when calves were purchased from local dairy farmers or dairy farmers within each young person’s region.

Once in their new home, the calves were then taken under the wings of a young Hereford breeder who has been busy since then rearing and tending to their animals.

Every young handler, on top of feeding and rearing the calf, will be halter training and preparing their animal for showing at the Next Gen Herefords Youth Competition and National Hereford Calf Show at GVM Tullamore in November 2022.

Each animal involved in this programme will be reared onto their second year.

In 2023, the cattle will go under the hammer at a live auction and full proceeds will go to a charity of the young breeder’s or the branch’s choice.

In total, there are 15 young breeders – rearing 11 cross-bred calves – across five branches – as follows:

All roads lead to Tullamore

Meanwhile, the society is gearing up for a big Hereford weekend in GVM Tullamore on Friday, 18th and Saturday, November 19th.

The National Hereford Calf Show and the Genetic Gems Hereford Heifer sale will take place on the latter date.

A spokesperson for the society told That’s Farming:

“The National Hereford Calf show promises to be a great spectator event with a large number of classes to suit all Hereford calves, including a commercial Hereford class.”

“The Genetic Gems sale will crown the day and the weekend when some of the top-quality Hereford heifers nationwide are brought together for auction.”

“This is an ideal opportunity for breeders to find either an addition for their herd or the foundation of their Pedigree herd.”

The society launched its inaugural youth competition in November 2021, when it moved the young handler event from the morning of the National Hereford Calf Show to a stand-alone event the evening before.

There will be a series of activities for all young persons to get involved in, including young handler competitions and showing Hereford cross-bred calves that young farmers are currently rearing nationwide.

A spokesperson concluded: “The event was a great success. The team is working hard again this year to ensure all events will run as smoothly and as successfully as last year.”

Also, on Friday evening, there will be a raffle to win a pedigree registered Hereford heifer to raise funds for the club to organise and host events and activities for young people.

- Advertisement -
Previous article
Pairs to €2,580 and in-calf lots to €2,300 in ‘strong’ trade at Ennis
Next article
‘Germany is re-opening coal-burning power stations to deal with their crisis’