John and Ann Commins operate a 70-strong herd of Piedmontese cattle in Co. Tipperary. Ann is also involved in the running of Blackcastle Farms.

John, a fourth-generation farmer, took the reins of the enterprise at the tender age of fifteen. “I always wanted to farm. When I was fifteen years of age after doing the inter cert, they could not get me to go to school any longer,” he told That’s Farming.

Traditionally, the farm was a dairy enterprise in the 1970s before changing direction to drystock where the herd recorded a positive Tuberculosis test.

“I worked closely with Teagasc to improve, but I feel that no matter how hard I tried, we couldn’t make money from drystock farming.”

Before moving to the Piedmontese breed, John farmed up to 70 Limousin suckler cows crossed with a Belgian Blue bull, in addition to 60 ewes and 120 ewe lambs. 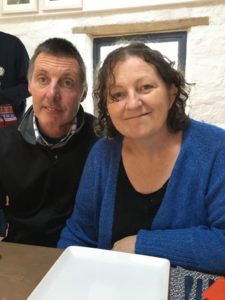 In 2005, after being told that the average Piedmontese animal can make €2,500, he made his watermark with the breed.

The grinding force behind the move was when he read an article which outlined that farmers could attain a premium price for the breed.

Helena Fitzgerald of the Irish Piedmontese Society was organising a trip to Italy, the breed’s home. “I went with my father-in-law, and we were very taken back by the breed society’s marketing. It was a brand that we could identify with and felt was a high-end product.”

Commins and his father-in-law purchased two cattle each, while John returned with Laois farmer, Michael Fennelly, the following week.

They purchased 20 breeding heifers each and placed emphasis on selecting those with low calving difficulty. 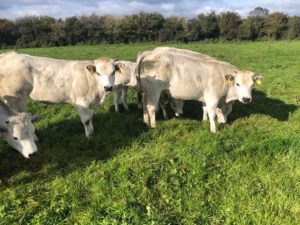 Furthermore, John acquired a stock bull in Italy that produced desirable breeding females and wielded the herd’s foundation for the next five years.

Initially, the plan was to breed heifers and sell the offspring back to Italy, but that was not feasible, so John improvised.

He recognised the beef’s uniqueness, with its very low-fat content, high protein, and omega 3 content and decided to sell his premium produce directly to consumers.

John and Ann have their own on-farm processing facility, ensuring they have complete control of their supply chain, from farm to fork.

“The 1% fat beef sausage is our huge seller. We had a team from UCC who developed the sausage for three months to get it nice and healthy.”

“Covid 19 has impacted massively on the farm shop as they rely on high-end restaurants and shops for beef.”

They now rely on e-commerce to market the Blackcastle Farm food brand to the consumer. Products available at the shop include mince burgers, beef sausages, steaks, roasts, stir fry beef and stewing beef.

The farm employs two butchers in its Department of Agriculture, Food and the Marine-approved building, where they package items and debone animals. They also have a vac-pack machine for packaging products. 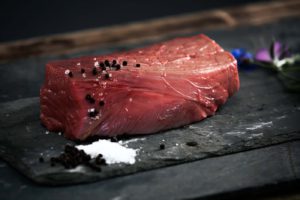 The offspring are fed out of the shed under the age of twenty months. They are fed a high maize ration ad-lib and hay ad lib as a roughage source with a constant water supply.

An independent panel of blindfolded tasters from UCC were deployed to taste test the tenderness and quality alongside other breeds and the Piedmontese won. 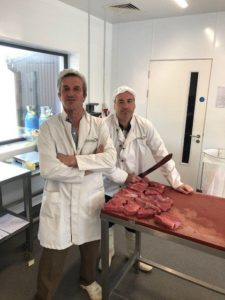 Operating a spring calving and autumn calving system allows animals to be available for slaughter in Moyvalley Meats all-year-round. All calves remain on the family farm.

“It’s suits the business perfectly to have a constant flow of cattle all-year-round. The progeny of the breed is very good, and calves are accessible each year. If the fertility of an animal is not good, I will move the animal out of the herd.”

They have a panel of Piedmontese stock bulls, with an easy calving bull used on heifers, and another bull for second and third calvers, while another is utilised older cows.

Commins also purchases AI straws from the Piedmontese Society, which he is involved in at council level.

Commins is pleased with the farm direction but wishes to encourage other breeders to buy more cattle for his system. When he has insufficient supplies of beef, he purchases suitable animals from breeders.

The ethos of his farm is to produce beef sustainably. “We have not cut a hedgerow in fifteen years, and we also have a wildflower garden.”

- Advertisement -
Previous article
PHOTOS: Gardaí investigating suspected shebeen in Limerick
Next article
‘I couldn’t care less if I never saw a tractor as long as I have livestock’