Joe Melody (31), runs a fourth-generation dairy and suckler enterprise in Co. Clare with his parents, JJ, and Ann, owning 360-acres plus leased land. The Melodys considered expansion to be one of the most viable options in 2013.

Firstly, how long have you been farming Joe Melody?

My family instilled farming from a young age, especially my father, whom I have worked with eleven years full-time. We are known for pedigree cattle, as my great-grandfather had pedigree Shorthorns on his farm with grandad using Angus and Hereford. My father and uncle had a considerable Charolais, Limousin and Angus herd with the dairy farm.

I educated in Pallaskenry Agricultural College, achieving an advanced dairy management certificate, which I completed 2011. Farm placement with Sean Bugler, a large herd in Scariff, was a big part of my life, advising me on the technical aspects.

What does your farming enterprise comprise?

I increased the herd gradually from 2013 to 140 cows in 2020. It was the most logical step for a two-person farm operation when I returned. We milk a combination of Holstein-Friesian and British Friesian. 180 cows are on the farm this spring with the addition of home-bred heifers; I dried all off in the first week of December.

We have 20 pedigree Charolais, Limousin and Hereford cows with bulls sold for breeding locally. My father and uncle were among the first to farm the Charolais breed in Ireland.

When does calving taking place?

Calving happens from January 23rd with the bulk in February. Last year, we had an 80% six-week spring calving rate, with improvements hoped this year. I AI alongside the Hereford bull. Milking is twice-a-day during calving to enable robust calving early to turn grass into milk solids.

Beef bulls from overseas with smaller star ratings proved well. We look for easy calving, good physicality, and progeny. It is a commercial operation looking for easy care, comfortable calving with adequate capacity production on the dairy front.

In 2020, we simplified by selling calves. As the numbers increased, we extracted from the dairy herd. I can scale calving and plan up. I keep Friesian replacement heifers at twenty-one to twenty-four months. 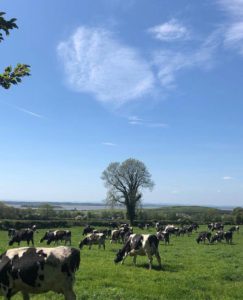 What grazing system used on the farm?

Grasstec created a basic grazing plan during expansion, advising roadways and paddock system. Dividing out wire is difficult with younger cows; I will lift wires soon.

The PBI app is crucial to measure, cut and weigh grass on the farm weekly, twice weekly at the season’s peak. It provides simulations and predictions for feeding; it can be labour intensive.

What type of milking parlour do you have?

In 2014, we upgraded from a six-unit to a sixteen-unit Gascoigne Melotte parlour. Life is comfortable, less time needed, a higher quality of life. I would have gone with the twenty-unit milking parlour; you would never regret it.

What is the housing system used on the farm?

In August and November, we use a flexible system called set aside grazing. It is weather-dependent.

In 2018, we built a 55-cubicle shed and heifers are winter grazed with space for 70 cows before the construction of the new shed. Another cubicle shed is in the planning.

Dry cows make space for the in-calf animals in cubicles. We built a buffer feed area behind the sheds and milking parlour in 2020, allowing for all milking cows to eat zero grazed grass in the event of a drought. It seems to work with concrete expenses not immediate in a growing herd.

Furthermore, what discussion groups and breed societies is Joe Melody a member of?

I am a member of the Bunratty Dairygold Discussion Group and East Clare Grass group. Both are fantastic groups of people; you cannot buy a glorious experience. I am one of the youngest participants in the Dairygold group.

Francis Clune, East Clare Grass Group, shows his knowledge by advising us on his farm. We have a tremendous agricultural advisor, Aidan Bugler.

Also, we are members of the Irish Charolais, Irish Hereford and Irish Limousin societies which play a significant part in many great friendships; dad is hugely passionate. Shannon Florence won national Charolais show title two years consecutively and Tullamore Show. It is a highlight of our showing career.

What challenges has the global pandemic brought?

In February and March, we were reluctant, but cattle prices and dairy rallying positively as the year concluded. It is a testament to the cooperative model and supply chain. The industry should be proud of a well-balanced product mix.

Why is Joe Melody passionate about dairying and food?

Dairying and making the food edible are crucial because of its seasonal routine of tasks the enterprise has twice a day milking. Dairying has a positive outlook with the population needing a food supply.

Finally, what advice would you give to fellow farmers?

Build on your strengths, know your weaknesses, hire people in that area.

Mentors are essential at the end of the phone. A discussion group model helps focus while using a profitable business and financial advisory team.