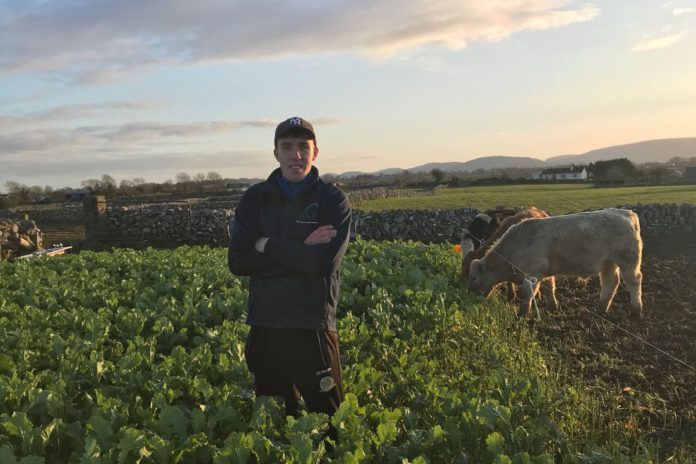 Eanna Linnane, from Kinvara, Co. Galway, has seen a lot of the world over the past 2 years and learned a lot about different farming systems.

The 25-year-old sat down with our journalist, Cian, to discuss what he has learned, both at home and abroad.

Eanna and his father run a suckler and sheep farm in Kinvara, right along the Wild Atlantic Way and a stones-throw from the Burren National Park. They farm 30 continental suckler cows and 70 Charolais-cross ewes on around 90-acres.

They have put a lot of time and effort into developing the farm, in both the land and the infrastructure. Recently, most of their efforts have been spent on the grassland, making paddocks and reclaiming ground that was previously limestone pavement.

Here is a before and after of the work they have done:

Eanna began his third-level studies in GMIT, gaining a level 7 BSc in agricultural and environmental management before heading to UCD to study animal and crop production, graduating in 2018.

Eanna had been in contact with dairy farms in New Zealand in the early months of 2018 and was on a flight as soon as he completed his exams.

“I went to New Zealand in July of 2018 for the calving season. I worked for Carmen and Chris Ryan and I was really well looked after.”

“There were 1,200 kiwi-cross cows and was ran very similar to an Irish system. We fed 80% grass and then 20% supplemented by concentrates, but it was mainly a grass-based system.”

The then 24-year-old stayed in New Zealand until February 2019 and flew directly from there to Missouri, USA.

Eanna arrived in Missouri in the middle of calving and stayed until early June 2019.

“When I left New Zealand it was 25 degrees, beautiful weather at the peak of summer – grass was growing, cows were doing well. I got to Missouri and when the plane touched down there was 2-feet of snow everywhere.”

The Kinvara native worked for a company called Grassland, who originally started in New Zealand in 2004, milking 1000 cows. They currently run 22 dairies over a land area of 17 000 acres with 15,000 milking cows across both New Zealand and the USA.

The system was similar to Ireland in terms of the time of year that the main activities take place. The biggest difference was the extreme and unpredictable weather.

“On my second week, the temperature dropped to -18 degrees and milk pumps were frozen, milk coolers were frozen, wash down hoses were frozen and the cows were getting really bad frost-bite on their teats.”

“As the year progressed, it could be really hot at 5 am and you’d have to take your t-shirt off and then in the afternoon it’s driving rain and the temperature has dropped by about 15 degrees. It was ridiculous how it changed so fast.”

“Two weeks in Missouri is like two weeks in Ireland because the weather changes so fast. The climate has such an impact. In two days, you could have a flush of grass or the place could be flooded. You have to be adaptable, flexible and most importantly decisive. You have to be able to make quick decisions.”

The Galway man currently works on a 107,000-cow farm in Saudi Arabia. This farm is one of the biggest farms in the world and is a fully indoor system. This is split into 5 ‘megafarms’ and one smaller farm all within a single area.

He was aware of the farm for quite some time, as a member of his family had worked there previously. He saw an advertisement, on the FRS recruitment website, of a vacancy in Almarai and contacted John Miller, Senior Recruiter for FRS recruitment, about the position. After a successful interview in Dublin, he packed his bags and headed off to the Middle East.

“There’s a speed limit of 60km/h around the farm, that shows you just how big it is.”

“There are about 2.5 to 3 thousand dry cows at any one time and 22,000 producing milk. In total, we have about 42,000 animals if you include calves, in-calf heifers, maiden heifers, the whole lot.”

Eanna works in the largest, called Al Badiah, and is responsible for 25,000 cows. He is a senior unit manager and works among a strong Irish contingent.

“We calve down a bunch of heifers at the start of every month, so for my first week, we calved 900 heifers that week. The other farms might calve in the middle of the month or the end of the month. It’s very structured, every farm has their period for calving.”

The farm used to grow its own maize silage on its 4000ha, but the government placed a ban on it due to the amount of water it was using. They now import the majority of their feed from North and South America. There are 52 silage pits being made redundant because of this.

“It’s more than what I expected going out there. The first week or two was really eye-opening, I found it hard to find my way from one house to the next but it’s starting to feel a lot smaller now.”

“After a few weeks you get to know the place and know the people and you get way more comfortable. I feel way more at home now, but the sheer scale can be intimidating when you first arrive. It’s like a military-style operation, it runs like clockwork.”

Reflecting on when the idea of working on this farm came about, he says it was a once in a lifetime opportunity that he couldn’t refuse.

“I really wanted to go to Saudi when I heard of how it worked. I was already used to travelling, so going out there didn’t really phase me. I knew it was going to be more extreme in terms of a social life, but it was a really big opportunity that I wanted to take.”

“The job in Saudi is completely different to Ireland, America or New Zealand because I’m learning how to manage people and systems now rather than doing all the farm work and labouring. I just wanted to keep learning,” he concluded.